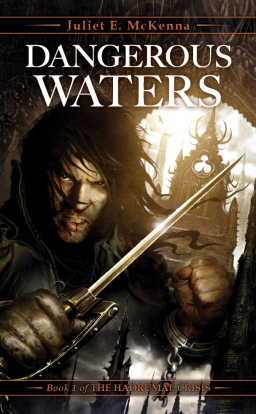 I’m such a sucker for paperbacks. Seriously, put a rogue with a sword and a ship on the cover, and I’ve got that thing to the cash register faster than you can say, “Paper or plastic?”

I think it’s partly because I find paperbacks very inexpensive. That wasn’t always the case. When I  made my weekly pilgrimage to downtown Ottawa bookstores in my teens, clutching ten bucks of hard-earned babysitting money, that was barely enough to get 2-3 paperbacks — if I was selective.

I agonized over each choice. Keith Laumer’s The Time Bender, or Fritz Leiber’s Swords Against Death? Edgar Pangborn’s West of the Sun, or Arthur C. Clarke’s Imperial Earth? These are the life choices that kept me up at night.

Today things are easier. For one thing, paperback prices haven’t budged in over 15 years. I paid $7.99 for a paperback copy of Connie Willis’s To Say Nothing of the Dog in 1998, and I paid $7.99 for the copy of Juliet E. McKenna’s Dangerous Waters I bought last week.

That’s an incredibly long period for anything to be stable in publishing — look at how paperback prices quadrupled in the 15 years between 1965 (around a buck) and 1980 (around 4-5 bucks).

Paperback prices won’t stay this way for long. But while they do, I’m enjoying them. $7.99 (minus my 10% Barnes & Noble member discount) is still an impulse buy for me. Which means I can pick up a book based on nothing more than a cool cover, and take it home guilt free.

I have no idea what it says on the back of Dangerous Waters, but I think I’ll read it now and find out.

The Archmage rules the island of wizards. From here he enforces the Edicts of the Council of Wizardry. Foremost is the ban on magecraft in warfare. But there is a rumour of rogue wizardry in Lescar’s recent civil war. There’s the rise of Artifice, its adepts not subject to the Archmage’s edicts. Now the Emperor of Tormalin is offering them his protection. There are corsairs raiding the Caladhrian Coast, enslaving villagers and devastating trade. Barons and merchants beg for magical aid. But all help has been refused. This is no comfort to Lady Zurenne whose husband has been murdered by corsairs. Now a man she doesn’t even know stands as guardian over her and her daughters. Corrain, former captain and now slave, knows that man is a rogue wizard, selling his skills to the corsairs. If Corrain can escape, he’ll see justice done. Unless Jilseth, magewoman and Archmage’s confidante, can catch the renegade first, before the full extent of his villainy is revealed.

If that happens, at a time when wizardry faces so many other challenges, the scandal could have dire consequences indeed!

Damn. If I’d know the marketing copy on the back included the words “the full extent of his villainy is revealed,” I would have bought two copies.

Dangerous Waters was published August 2011 by Solaris Books. It is 448 pages in paperback, priced at… see, you weren’t paying attention. $7.99. We’ve been over this. Dangerous Waters is the first installment of The Hadrumal Crisis; the next volumes are Darkening Skies (Feb 2012) and Defiant Peaks (Nov 2012).

[…] few weeks we’ve covered several recent titles of note, including Juliet E. McKenna’s Dangerous Waters, and The Good The Bad and the Infernal by Guy Adams. See? These guys are […]