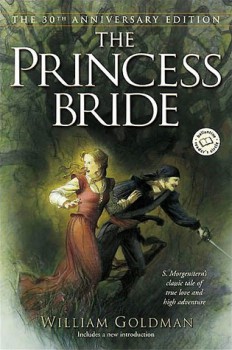 The sorcery part’s easy – pretty well everyone knows I’m making that up, and so long as I keep things internally consistent, I’m in the clear.

But what about the sword part? I can’t just make that up, can I? Viz. this exchange, which took place on a martial arts panel at Ad Astra back in the 90’s:

Panellist: “You know in the movie when Wesley and Iñigo are fighting? Well, they’re not really using the moves they say they’re using.”

Called out by a wit from the back of the room: “Gee, they are in the book.”

And there’s at least part of your answer. You can write whatever you like, but, like William Goldman in The Princess Bride, it behoves you to do some research.

There are some great books that explain all kinds of things about swords and swordplay. There’s Captain Sir Richard Burton’s The Book of the Sword. There’s By the Sword, Richard Cohen’s excellent book on the history of duelling and fencing from ancient into modern times. And there’s also John Clements’s Renaissance Swordsmanship, which has illustrations showing fighting with different kinds of swords, against different kinds of  weapons. It also describes fighting moves in such a way that you can put together a fight — so long as it’s not too complicated.

But is book learning enough? I don’t think so. 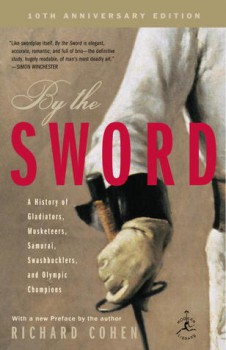 So what else can you do? Well, you can take up fencing – unless, like me, irregular eyesight, poor balance and worse hand-eye coordination make you a danger to yourself and others. In that case, you go to fencers, and modern/historical swordplay experts, and ask questions.

Be careful to ask specific questions, though, because you don’t want to know how to score points with an epee, or even with a sabre – you want to know how to kill people with one. By the way, according to one of my sources (Z. Sikora, Detroit fencing master) fencing with a sabre most closely resembles actual trying-to-kill-someone swordplay. So now you know.

The most practical question I’ve asked people who are fencers themselves is: what movies do it right? After all, not only are films usually easy to get your hands on, they’re a handy way to have, at your fingertips, some great fight scenes to copy – uh, I mean, to inspire you. 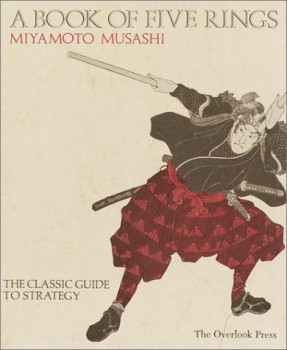 But I wouldn’t want you to think that this is all there is when it comes to putting the sword in sword and sorcery. There’s more to the sword itself than the blade, the guard and the grip. There’s also the person gripping it. Again, people like Myke Cole, or Elizabeth Moon, or Tanya Huff, who have a real-life military background to draw upon, don’t need to learn what the mind of a soldier, or of a fighter, is like.

But remember me? Half-blind and clumsy? Going to be refused/excused military service even if I was still young enough to volunteer?

Well, there are some books that can give insight into the fighter’s mind as well. I’d recommend Machiavelli’s The Prince, Musashi’s The Book of Five Rings, and Sun Tsu’s The Art of War. I recommend these in particular because they don’t reflect modern points of view about war and fighters.

All of them, even Machiavelli, are rather foreign to the modern way of thinking (no pun intended since they’re all, um, foreign) and that’s often true of the kinds of characters we want to see in our sword and sorcery fantasy.

I’d also recommend Lt. Col. Dave Grossman’s On Killing, however, to give you a perspective on warriors you might not have considered.

So let’s see. Read a bunch of books. Watch a bunch of movies. If it wasn’t for the “get a bunch of writing done”, my life would be pretty easy.

I know I’ve mentioned it in comments here before, but On Guard

has some really great fencing scenes in it, and is also a very fun swashbuckler.

Id take Grossman’s “On Killing” with a very large grain of salt.

He based a good chunk of it on a flawed study conducted post WW2.

I would recommend ‘Musashi’ by Eiji Yoshikawa. While the novel isn’t sword and sorcery it does give an idea of the Japanese wandering swordsman.

Like you, I am not a natural at kinesthetic learning, and even in my youth would have been unpromising warrior material. I found Tai Chi very helpful to my first sustained efforts at writing combat scenes, especially because teachers expect that many of their students will be there precisely because they’re not natural martial artists or athletes. I could learn at my own pace, which was sometimes comically slow. Yet Tai Chi is a quite serious martial art, and the biomechanics seem to generalize. I found a lot of parallels with fencing.

Long ago, I was the worst varsity fencer at Vassar. Actually, it’s quite possible that I would still hold the record for that distinction. I’d read some books and had a clever eye, but even at 18 and in the best shape of my life, I was too slow to win a lot of bouts. What I could do, that the quick-footed girls did less well, was see weaknesses in tricky opponents. So at meets, I’d go up first against the opponents nobody could figure out, take my beating, stagger off the strip a bruised mess, and tell my teammates my observations. The next person on my team up against that girl would make short work of her, doing exactly what I’d said would work.

It was sort of like being the penguin the other penguins knock off the glacier to see if there are too many orcas in the water. I loved it. I would do it all over again, if my ankle joints were still up for fencing.

Thanks Joe H. I wasn’t aware of On Guard, but I’ll look for it. I’ve also had recommended to me a video called “Masters of Defense”, but I haven’t been able to find it yet. Sarah, what I would give to have your eye!

No Scaramouche on your movie list? I am saddened by its absence. Still my pick for the finest overall fencing scene in a movie. And while I’ve often heard that The Prince Bride‘s scene is longer, not in my versions. Not even close.

“Day of the Dove”: best Star Trek episode ever.

Is it bad that I read The Prince and wondered why everyone talks about how evil it is? (I also made notes on several story ideas.)

The art of the sword | Karavansara

Jeff, I’d forgotten about Scaramouche, thanks for reminding me – though I think I did say it was a “partial” list. Which version do you think is best? I had much the same reaction to The Prince that you describe

Here’s a couple of YouTube clips that seem relevant:

I think I remember seeing a listing for the Master of Defense video http://www.imdb.com/title/tt0811782/?ref_=fn_al_tt_1 in an old Museum Replicas catalog, but sadly I never actually bought it.

Violette, the 1953 version with Granger and Ferrer. If I’ve seen any of the other versions, it was long ago on Saturday afternoon TV.

And speaking of Ferrer, wasn’t there a fairly good fencing scene in his Cyrano de Bergerac? And I recall some in Gerard Depardieu’s Cyrano as well. Boy, my list was even more partial than I’d thought!

Interesting tidbit I’ve probably mentioned here before: Granger had training with a sword, but Ferrer had none. He was a dancer, so he learned the fights by number. (The climax was an exhausting two weeks of shooting, with several oopsies and close calls.)

[…] while ago, when I started writing these posts, I talked about how to put the sword in Sword and Sorcery, and while doing my latest posts on the Fantasy and SF hero, it struck me that, in a way, I was […]