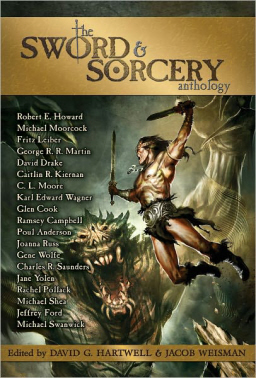 We announced The Sword & Sorcery Anthology was shipping last week, but I’m glad to report that I now have it in my hot little hands.

And it looks gorgeous. It’s 480 pages in thick, oversize paperback, and sits nicely in my lap as I recline in my big green chair. Where it will remain for much of the rest of the weekend, I think.

In fact, I have two copies, courtesy of co-editor and publisher Jacob Weisman. I was going to add it to the list of titles that go out regularly to our dedicated team of freelance reviewers, but maybe I’ll just give it to the first one that asks for it. Or maybe I’ll encase it in plastic and carefully bury it in a time capsule in my back yard. Future generations with thank me (assuming they can figure out what a book is).

David Drake’s introduction notes that while two stories in this book originated in Weird Tales — the magazine that gave birth to Sword & Sorcery — three come from the legendary small press magazine Whispers, edited by Stuart David Schiff from 1973 to 1987. Drake was the assistant editor for Whispers starting with the second issue; his musings on the authors and fiction included in this volume are fascinating.

Two pieces — Michael Shea’s new Nift the Lean story “Epistle from Lebanoi,” and Michael Swanwick’s “The Year of the the Three Monarchs” — are original to this volume.

The Sword & Sorcery Anthology was edited by David G. Hartwell and Jacob Weisman. The cover is is by Jean Sebastien Rossbach. It is published by Tachyon Publications, and priced at $15.95 for the print version and $10.95 in digital format. More complete details are here, and the complete Tables of Contents is here.

I hope you’ll come back with a review after you’ve finished. I’d be very interested to hear your thoughts on this one.

I’d also be interested in a review. Myself, I quite liked it, but I wish it had included some background information for every author/story. Ah, well.

I hope I have time to write a review too! But there are plenty of reviews out there already, I’m sure.

Yeah, I noticed the lack of any kind of intro for the authors, like Dozois and Hartwell do for their YEAR’S BEST.

I always enjoy those myself — even when I’m very familiar with the author — but it is a stylistic choice on the part of the editors, and takes nothing away from the great fiction.

Intros or not, I for one would be very happy if this one does well enough to spawn two or three sequels.

I don’t know if there has been such a collection of Sword and Sorcery heavyweights like this since Flashing Swords. I hope it mints a new teeming mass of rabid sword and sorcery fans. It might, the world is ripe for it.

I don’t really get this book’s purpose. Is it supposed to be a history/survey of the genre? Then why no author info or essays about it? Is it supposed to showcase where the genre’s gone these days? Then why none of the folks doing the best work in the field today (ex. James Enge, Howard A. Jones, etc.)? Instead there are some (albeit very good authors) not really known for developing the genre. It just seems a sort of formless collection.
And yet, already owning most of the stories in it, I still might buy it just to get my hands on the new Nifft story.

>I don’t know if there has been such a collection of Sword and Sorcery heavyweights like this since Flashing Swords.

Well said. I have to note though, FLASHING SWORDS — both the Lin Carter paperback anthology series, and the more recent ezine of the same name — were all-original markets, not reprints.

As much as I enjoy a handsome reprint anthology like this one, nothing really nurtures a new mass of S&S fans like a great new market.

Well, I think you’re being a little harsh. This is a survey anthology, which means it covers some 7 decades of sword & sorcery, and that leaves only 1/7th of the book to cover the top new writers of the last decade.

And while I agree that it should certainly include both James Enge and Howard Jones, I can’t really fault the choices the editors did make — including Gene Wolfe, Jeffrey Ford, George R. R. Martin, and Michael Shea.

Having really looked at this now my stance has largely unchanged this is a great antho for Sword + Sorcery.

This antho is a great device to shove a youngster into the deep end + and if they don’t drown, a new Sword + Sorcery reader will rise.

The editors even go so far as to leave out a forwarding essay that attempts to pin Sword + Sorcery down in some authoritative pretense.

The above may not be grande vogue however if a youth or or child encounters this they are free to begin defining Sword + Sorcery for themselves which is the process I went through and I think I turned out alright.

Only a few ( very few ) of the selections from the various writers’ own Sword + Sorcery works seem sub-optimal or ‘off'( Leibers’ stands out ).

Any ways…I would have loved to see Enge or Jones in there, but hell what about Dunsany, Smith, Zelanzy, Vance? Wellman or De Camp, Le Guin? Brother G?

There just isn’t enough room for everyone in a single volume ( though the VanderMeers’ latest antho ‘The Weird’ sure as fuck died-with-its-boots-on- trying ).

Jones and Enge as admired as they may be in the loosely knit Sword + Sorcery community of today are pretty much unknowns outside of that, or better underground dudes for now.

They ( Enge + Jones ) may die in the underground.

I admit I’m probably being too harsh. With all the great anthologies of the past long out of print maybe this is a good way to give newcomers a taste of the past and for that I’m very glad. And sure, all the authors RadiantAbyss listed are deserving of inclusion on anyone’s list of anthology worthy authors (heck, I’d rather see them than the ubiquitously available REH, Leiber and Moorcock). It’s just that with an active “loosely knit Sword + Sorcery community” I would still prefer something calling itself “The Sword and Sorcery Anthology” to connect to it in someway.

And, really, Enge and Hope are part of the underground but Pollack and Saunders are better known? 😉

It wasn’t perfect. But then again I probably wouldn’t think it was perfect unless it had the complete works of Howard, Moore, Wagner, Saunders, Jones, Enge, Leiber, Moorcock, Vance, Smith, etc., etc., etc. Which is probably a bit much to expect.

I don’t consider Saunders or Pollack underground, within the Sword + Sorcery community.

Saunders + Pollack have built up that cult following that has lead to expectations by ‘insiders’ that they be included in any genre-history-spanning-antho attempt like this.

Enge + Jones while actively + shamelessly getting Sword + Sorcery published, WAY before it was ‘cool’ again, could be here but it’s all a bit like being pissed at Charles L. Grant for NEVER having Thomas Ligotti in his overall wonderful Shadows anthos that ran from the 80’s till the early 90’s.

Some people just get missed ’cause they are underground.

Give it some time they have a shot at some day getting reprinted in something like this, after all wasn’t Enge in Swords + Dark Magic?

I get all your points and even reluctantly agree with most of it. Not having Saunders would have been a crime. My arguments come mostly for always imagining how I would do it better (yeah, right). It’s just I hoped/wanted/wished something with the book’s title and Mr. Hartwell’s excellent “Dark Descent” as an example, something more comprehensive and informative (because I want new readers to be able to gain an understanding and history of the field).

One of the exciting things about Swords and Dark Magic was that it wasn’t reprints. It’s definitely the best anthology in the genre to come along since the heydays of Lin Carter and Andrew Offutt.

All of which is to say, I’ll probably buy the thing, because I want to support the genre/own every dang anthology I encounter, etc. And it does have a cool cover. (And I’m going to see if I can find my Shadows books in my sister’s attic.)

> One of the exciting things about Swords and Dark Magic was that it wasn’t reprints. It’s definitely the best anthology in the genre to come along since the heydays of Lin Carter and Andrew Offutt.

Flashing Swords and Swords Against Darkness of old were (then) original Sword + Sorcery tales and are likely one of the main reasons we have Black Gate at all.

It can not be understated that new Sword + Sorcery tales should get to the light of day, for reprints all to often make the subtle statement that Sword + Sorcery is old, dead, ‘something people did a long time ago but ‘cool’ people are doing other things now.’

Sword + Sorcery is being done NOW + people need to get word.

and what about Lin Carter and Andrew J Offut? and Henry Kuttner? but the most important absence is that of some story by David Gemmell, an author you even haven’t mentioned

> the most important absence is that of some story by David Gemmell, an author you even haven’t mentioned

David Gemmell is revered for his novels, but he’s not particularly known for his S&S short fiction. In fact, I’m not sure I could name a single short story he’s written.

[…] “The Caravan of Forgotten Dreams” first appeared in the October/November 1962 issue of Science Fantasy, #55, under the title “The Flame Bringers,” but has recently been anthologized in David Hartwell and Jacob Weisman’s The Sword and Sorcery Anthology. […]

[…] listed as New Treasures on Black Gate). In my opinion some of the best include David Hartwell’s Sword and Sorcery, Lou Anders and Jonathan Strahan’s Swords and Dark Magic and John Joseph Adams’ Epic: Legends […]

[…] a couple of very good ones though, see the introductions to David G. Hartwell and Jacob Weisman’s The Sword and Sorcery Anthology and Jonathan Strahan and Lou Anders’ Swords and Dark Magic.) So, when I recently stumbled across […]

[…] Strahan and Lou Anders’ Swords & Dark Magic, and Hartwell and Weisman’s The Sword & Sorcery Anthology, all of which are 480+ pages in trade paperback, and any one of which is practically a library of […]

Reading this book was a terrible disappointment, but something I should have been expecting based on the other Sword & Sorcery anthologies released in recent years.
Instead of meaning fast paced adventures and terrible monsters, these books tend to slap the Sword & Sorcery lable on pretty much anything that is a short story and set in a vaguely medieval setting. Lots of stories that are just pretentious in their use of convoluted language and try to imitate depth and mystery with the cheap trick of withholding critical information from the readers, which all characters in the story know, but without which nothing makes sense.
And this book has a really big number of pretty bad offenders.

Sorry you didn’t enjoy it. Fletcher had a look at a Vintage S&S anthology this week that you might enjoy more: