I first encountered the name Charles Tan a few months ago, through publisher Erzebet YellowBoy of Papaveria Press. Mr. Tan kindly agreed to review the first two books in the new Wonder Tales series, Jack o’ the Hills and The Winter Triptych.

I did what one usually does. Commented on his blog. Friended him on Facebook. You know. The rounds.

On Facebook, Charles is a friendly presence, often wishing me a, “Good morning!” with such exuberant emphasis that I realized it must not be morning wherever he was. So I looked into it — and lo! As I’d begun to suspect, he’d been wishing me good morning from his evening — in the Philippines! So I started writing, “Good evening!” right back, which, at 10 AM, never fails to strike my silly bone.

As for who Charles Tan is, the World SF Travel Fund site (a crowdfunding effort to bring Mr. Tan to the states for the World Fantasy Convention — where he’s up for the Special Award – Non Professional ) sums him up nicely:

“Charles is a tireless promoter of speculative fiction. Besides his own Bibliophile Stalker blog, he contributes to the Nebula Awards blog, the Shirley Jackson Award blog, SF Signal and The World SF Blog. He also edited two online anthologies of speculative fiction from the Philippines. Charles is highly regarded in the SF scene both in the USA and internationally.”

But Ms. Cooney, you ask, what does this have to do with your subject line?

A little while ago, Charles offered to send me a copy of Philippine Speculative Fiction Volume 6 (more on that later), either in physical form or pdf. Luddite as I am, I opted for the former, because usually electronic manuscripts sit on my desktop, blithely ignored. Those precious few hours I get to be on a computer for me, I like to be typing, not reading. But a physical copy, now, that you can throw into a pocket, or a backpack, and make everybody jealous on the train, because you’re reading something cool and they’re merely playing solitaire on their smart phones for the umpteen billionth time.

I received my copy of Philippine Speculative Fiction 6 in the mail — which I haven’t read yet, but will, and then will write about it here for your delectation, O ye faithful readers! — and ALSO I received a copy of The Digest of Philippine Genre Stories (or PGS) Issue IV. Issue IV is, I believe, the last print issue of this magazine before it went digital. 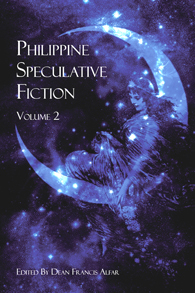 “It’s taken a while coming, but given the rising costs of producing and distributing in print, PGS, which began its existence in digest form on paper, has now made its move to the Internet…

…The goals are the same: To get more people—especially younger folk, most especially Pinoys, but anyone would do—to discover the pleasures and develop the habit of reading through fiction, fiction written by fellow Filipinos, in particular.

It was through genre tales that I came to love books and read pretty much anything… Even if the dead-tree medium of reading is falling in demand, doesn’t mean we can’t adapt, even belatedly, and find our reading material through other means.”

So, this morning on the train, while onlookers looked enviously on, I had the very great pleasure of reading my first copy of PGS.

My first impression (after smiling at the yellow sticky note that Charles Tan had adhered to the cover, which read “Here’s a Black Gate-y Magazine 🙂 “), was that the editor’s sister-in-law was my kind of woman.

“When she’s into a book,” Yu writes in his editor’s note, “she cannot, she will not, be disturbed. My wife warned me about her before we got married (“You can’t talk to her when she’s reading”) and still warns me about her up to today…”

Having gotten so cosy so quickly with an absolute stranger (we could sit beside each other on a couch, I thought to myself, Kenneth Yu’s sister-in-law and I, and just READ ALL DAY!), it was very easy to slip into the first story, “Chimaera,” by Yvette Tan.

Maybe it was the talking griffin protagonist, but I immediately harkened back to Diana Wynne Jones’s Dark Lord of Derkholm. Not too shabby! This story definitely wasn’t a chore to read; “Chimaera” is simple in structure but colorfully imagined, borrowing from ancient myth and set in a far future. There is nothing revolutionary about plot, dialogue or characters, which, considering that the author wrote it in high school, isn’t a shocker. Tan has, in fact, since moved on to writing horror, her true love. You can see the future horror writer in this story, too. There’s a eyeless, tongueless, putrid beggar named Mordecai who puts in an appearance, so gleefully gross that you know the author kind of adored putting her pen to him. I liked it. 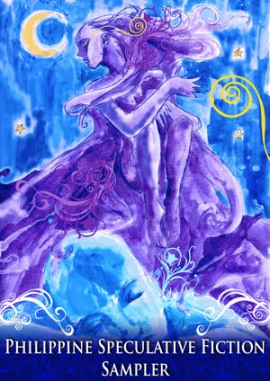 I liked “Psychic Family,” by Apol Lejano-Massebieau better, though. I’m a sucker for a good ghost story, and this one does some pretty neat things with time jumps and section breaks, devoting equal time between world immersion, character study and plot. The first person POV is compelling, a preteen girl whose mother and sister can see ghosts (she can’t; she feels left out), whose father is bankrupt, and whose only friend in the new bungalow they’re living in is Lily.

Lily will walk into a room without a knocking, appear behind you when you least expect her, and wears old fashioned clothes. The tone of the narrator is light, but there’s a lurking creepiness, an underlying rot that makes the reader (this reader, anyway) VERY uneasy — which is just what’s supposed to happen in a ghost story. For example:

“The only problem is that there is a bad smell in there all the time, like rotten fish, or the brown gunk oozing out when I was in second grade and got an ear infection. Mom and the maid Linda washed down the walls Clorox bleach. They sprayed everything with Lysol. The odor remained.”

No more spoilers, ’cause it’s worth reading. I totally dug it.

“Blink, Wake Up,” by Mia Tijam begins, “Once there was this little girl who was already as wise and weary as an old woman.” Great opening line, and I immediately looked forward to the rest. It never pulled together for me, alas. The structure is experimental, the prose hallucinogenic. There are boxes made out of glass shards, and talking dolphins, and Bob Marley, and the whole thing is shattered and melancholy, and leaves its residue of sadness in you. But if you ask me what it was about, I’d probably just refer back to the first line. And the dolphin.

The last two stories, “The Last Stand of Aurundar” and “In the Dim Plane” are very interesting, because they both take place in the shared world of authors Vincent Michael Simbulan and Dean Francis Alfar. The world is called Forlorn, “a world ruined by the invasion of vile darkness.” The co-architects of this world wanted, in Alfar’s words, “to explore a fantasy setting where, despite the most horrible things, the virtues which make us human shine brightest.” They were “to write alternating stories… until we have told the entire story of Forlorn’s fall.”

These stories were perhaps the two most “Black Gate-y” of them all.

“Aurundar” is a last-stand story, told from the point of view of a sentient fortress.

“You are defiant. Your walls have stood unbowed and unbroken for centuries. Your shimmering turrets and massive ramparts have proudly dominated the skyline and you will make sure they continue to do so.” 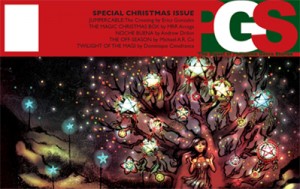 Though I commend the audacity in “Aurundar,” it was a little hard for me to feel any kinship with a proud, shining castle and its telepathic connection with the Duke. Perhaps this is due to the slightly alienating second person. Or maybe, just maybe, if we had known Aurundar longer, from its first cornerstone, from the blueprints of the architects who raised it from the ground — or were able to understand the Duke better, as he’s our human connection to the building — then the fall of Aurundar would be more spectacular. I wanted Aurundar to have the splendor not only of a physical space, but of an ideal — like Camelot or Gondor — and that its destruction was that of hope as well as stone. Some of that is in the writing, and I do think there’s a lot of possibility here, especially as it’s one segment in a string of stories. I actually found myself looking forward to the inevitable “Forlorn Sequence” anthology these authors promise to put out one day.

“In the Dim Plane,” along with “Psychic Family,” was my favorite story in PGS.  First of all, every single character in it is a villain. They all exist, after the fall of Forlorn, in a sort of half-life, “with almost no power left and no way to recover any more.” The narrator is the greatest Necromancer of Forlorn: Teros, AKA “Doom of Dirmoth.” His companions are Lord Jussin the Betrayer, “a fallen paladin who had denounced his queen for the promise of power”; Braxas, Harrower of Flame; Lizel Gorgist, The Widow’s Bane; and “the maxim-laden polymath Resa Undermasque, who had bartered parts of her body for knowledge.”

Even their names hint at back stories I’m eager to gobble (some more than others, I’ll admit, and I’ll admit I’m most curious about Resa Undermasque). There was a story-within-a-story that made the bulk of the plot, constantly interrupted by the obstreperous audience members, and a beautifully tidy wrap-up. It had all the good stuff — violence, romance, sparky dialogue, oppressive atmosphere… Pretty impressive, the worlds and characters a person can build in 12 pages!

I’d definitely recommend fantasy lovers to go to the Philippine Genre Stories website and check out their free online content. I had a lot of fun reading this little ‘zine and will be keeping my eye on some of these authors. Don’t miss out!

So were these stories written in English from the get-go, or were they translated from Tagalog?

Both the ‘zine and the website are in English, although “Psychic Family” for example used more than one language in the dialogue. You should friend Charles on Facebook and LJ! Thank you so much for reading!

When David Sklar and I were reading slush for our anthology, we got a lot of fascinating stories from the Philippines. We didn’t end up buying any, but in every case we asked the authors if we could contact them for future projects. There does seem to be a deep well of surrealism to draw from in their genre fiction tradition, and we loved the feel of it.