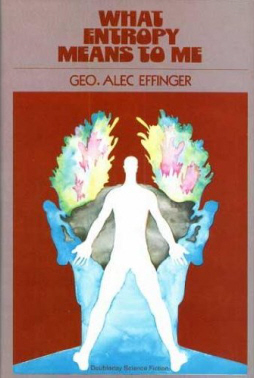 There are indeed urban legends at work in the Collector’s market. For example, the entire print order of George Alec Effinger’s first novel, What Entropy Means to Me (Doubleday, 1972) was supposedly pulped before publication (almost certainly untrue).

We associate Doubleday with very short print-runs, quickie pulpings, and fabulously high collector’s prices. Many of the most expensive books in our field are Doubledays. (Specifically, early Heinlein, early Zelazny, early King.)

What Entropy Means to Me is not a rare book, even in non-ex-library copies. I have one. It may be that the price is still low because the demand is low, but this is not a hard book to obtain.

What I have always heard is that it was Zelazny’s Creatures of Light and Darkness which was mistakenly pulped prematurely. Apparently they planned to pulp something else, most likely Nine Princes in Amber, and pulped the wrong one, which resulted in Creatures only being in print a few months.

Meanwhile, most copies of Nine Princes were sold to libraries and were either defaced or destroyed. In retrospect this became a very sought-after title, and thus one of the great collector’s items of SF. There is one on Abebooks right now for $8,500. 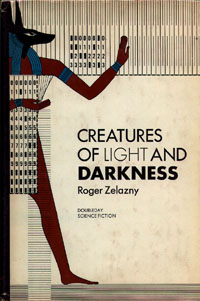 Creatures of Light and Darkness and the Doubleday first edition of Lord of Light are actually scarcer. Lord of Light is also a multi-thousand dollar book these days. Creatures you sometimes can find in the medium hundreds. Less demand.

Add to this the known fact that the entire print-run of J.G. Ballard’s The Atrocity Exhibition in its Doubleday edition was pulped (except for a very few review and author copies). Now mix and stir and you can see how the “legend” has attached itself to the not-very-scarce Effinger book. (I don’t know who has the surviving copies of The Atrocity Exhibition. One was offered in a Fantasy Centre catalogue some years back for about 3,000 pounds. This might have been Ballard’s copy.)

There is a signed first edition of What Entropy Means to Me on eBay right now at a Buy It Now price of $30.00, which puts things in perspective.

The other thing rumor has it about the Effinger book, which might have caused it to enter the folklore of our field, is that allegedly Effinger sold it for the then shockingly-low advance of $1,000.

This was cited at the time as a sorry example of an eager young writer taking a too-low offer for a first novel. Nowadays, of course, as many first-novelists are in the small press, a thousand dollar advance might be looked on with envy, and would not be a cautionary tale at all. 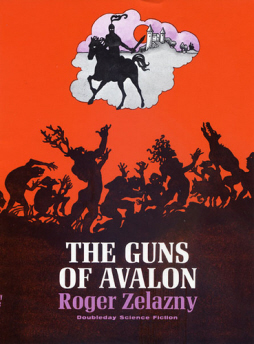 By the way, not all Doubledays of that period got pulped. The second Amber book, The Guns of Avalon, actually had a second printing. There are some others of the period which have later printings. I have seen non-firsts of some of the Gordon Dickson titles. Doubledays of this period always clearly say “first edition” on the copyright page when they are.

How much spending power would $1,000 have in today’s money? Well, if we use the price of the book itself as an indicator, I note that the cover price on the Doubleday 1st edition of Entropy is $4.95. The cover price on a novel I just got for review from Tor the other day is $24.99.

I realize that all prices do not inflate at the same rate, but that still seems about right. Therefore we conclude (not very scientifically) that a 1970 dollar was worth five times what a 2010 dollar is, and this would be a $5,000 advance today, which would be pretty good for a first novel.

But today one hears of $1,000 advances, $750 advances, and I know of any number of small-press books published for $200 advances or no advances at all.

Now if we adjust in the other direction, and divide the contemporary figures by five, we see how much better off writers were in 1970.

The real good old days were in early 20th century, in the Great Depression and before. In the late ’20s The Saturday Evening Post paid at least some people $5,000 for a short story. That is probably the equivalent of $50,000 today. (They may well have paid F. Scott Fitzgerald considerably more.) 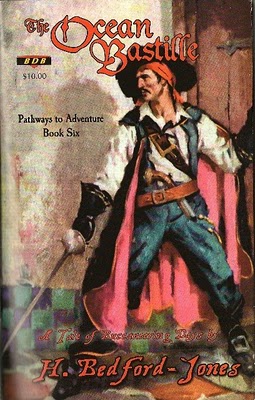 If you moved up a notch and made 2 cents a word, it got easier. If you wrote for the Spicy pulps and earned 6 cents a word, you were on easy street. If you were a successful superhack like H. Bedford Jones, you could become fabulously rich. Bedford-Jones was making $75,000 a year in the mid-’30s. When Liberty offered him an exclusive contract to write only for him at $25,000 a year, he just laughed at them, so the story goes.

Writers have not done as well since. Of course magazine circulations are not what they once were, and the equivalent of Bedford-Jones today works for Hollywood.

Of course not all writers got rich in the old days. In the winter of 1933, I believe it was, Edmond Hamilton and Jack Williamson rented a bungalow in Key West for two dollars a month. They split the expenses. Then they could afford to write science fiction…

Darrell Schweitzer’s last story for us was “A Dark Miracle” in Black Gate 3. His most recent blog post was The Collecting Game: The Windup Girl for $950?

Darrell, you’ve got the stories about CREATURES OF LIGHT AND DARKNESS and NINE PRINCES IN AMBER mixed up. It was NINE PRINCES that was mistakenly pulped shortly after its release. The order had gone out to pulp any Zelazny title still in print that might compete with NINE PRINCES, but the wrong title got pulped. So CREATURES remained in print, with a typical small Doubleday print run and slow sales, while NINE PRINCES had just been distributed mostly to libraries when the bulk of its print run was destroyed.

Others have blamed the disappearance of NINE PRINCES on a warehouse fire but that is an urban legend. It was the clerical error that lead to the destruction of the print run.

I verified this by viewing correspondence from that era between Zelazny, his agent, and Doubleday. I also wrote about it in the biography “…AND CALL ME ROGER”: THE LITERARY LIFE OF ROGER ZELAZNY. The relevant section is “Mythical Warehouse Fire and Nine Princes in Amber” and it is contained within part 3 of the biography, on p 516 of THIS MORTAL MOUNTAIN: VOLUME 3: THE COLLECTED STORIES OF ROGER ZELAZNY.

Oh, and dollar values of earlier years can be converted more accurately with tools such as the one at http://oregonstate.edu/cla/polisci/sahr/sahr . I used that one to convert the value of Zelazny’s advances etc. into modern equivalents. But roughly speaking the 1970 dollar was worth about five times what the 2010 dollar is worth. And a 1930 dollar was worth almost 13 times a 2010 dollar.