“Imagine if Frodo had died during his journey and the One Ring had returned to Sauron.”

That was how it was described to me the first time I picked up the Midnight Campaign Setting book, once again from Fantasy Flight Games. A very apt description, and if it doesn’t get your d20-shaped heart pumping, nothing will.

Midnight is a world where an evil god has triumphed in his war for power, and the characters are fighting a seemingly hopeless battle against the forces of darkness. The races of Eredane, the main continent, are besieged on all sides by orcs, demons and the Night Kings.

In flavor and description, Midnight borrows heavily from Tolkien’s Middle-Earth. But where his story is that of the light of hope sparking in the midst of descending darkness, Midnight is one of the fading glimmer of hope in the midst of near-total darkness. The rulebook does quite a good job of creating this sense of doom, and strife.

There are two editions of the main rulebook. The first edition is large enough, with a complete set of rules to run a campaign. However, the 2nd edition rulebook is a massive 400+ pages, and includes all of the relevant information from the 1st edition book, plus the content found in the first player’s guide, Against the Shadow.

The history of the world is rich and well-developed. The layout is intuitive and clearly divided into sections, allowing DMs to parcel out information to players on a need to know basis. The artwork is top notch, and the overall design supports the feel of the world nicely. 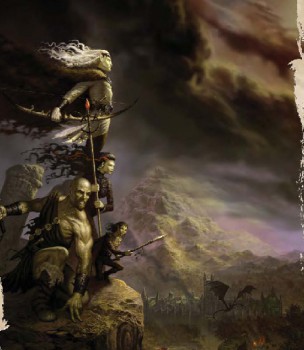 The rules are standard d20/D&D, but with added feats, prestige classes and, most notably, new races and new core classes. The magic system is revamped from traditional Dungeons & Dragons, so some of the magic-using core classes have been changed or even eliminated (as with the Paladin and Ranger). The wealth and money system is unique, and incorporates the idea of bartering, rather than just straight up shopping sprees.

When you combine the core rulebook with the multiple additions and supplements available, you end up with a setting that would literally take years, and probably many characters to fully explore.

The main downside with this setting is the same as it is with all of Fantasy Flight’s RPG materials. It is out of print. Like Dragonstar, Midnight has been abandoned to the used book stores and online retailers, with no official support forthcoming.

But really, with the sheer volume of product produced for this setting, not much more needs to be added to have a fully realized campaign in a world where darkness reigns, and hope is fleeting.

Tom Doolan has fought hordes of zombies, infiltrated Imperial strongholds, and is raising three children. Clearly he laughs in the face of danger. To read more about his inane, yet socially responsible thoughts and adventures, visit his blog at http://tomdoolan.blogspot.com