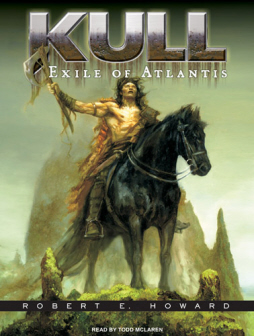 Even with the weakest Robert E. Howard stories, the imagery he employs in crafting the tale redeems any failings. Howard waxes eloquent when Kull and his men visit neighboring kingdoms and the king stands upon a mountaintop overlooking the valley below and ponders the difference of the topography from his native Atlantis. Kull draws parallels on how the lay of the land is reflective of the endurance of its people.

Howard continues this introspective spell in having the king measure himself against the commander of his troops. Surprisingly, Howard has his hero find his own character lacking in a strict departure from the norms of the heroic genre. 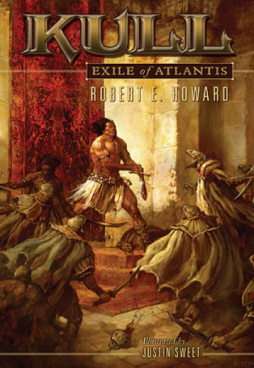 Kull subsequently reflects on the unfairness that his commander can rise no higher in the ranks because he is of foreign birth. Kull, himself a barbarian usurper to the throne, is also a foreigner and an illegitimate monarch to boot.

That Howard has drawn a deliberate parallel with the inequality of arranged marriages in the plight of the fugitive Lala-ah to the inequality of the rules limiting his commander’s station is beyond Kull’s understanding, but certainly not the reader.

The Valusians arrive at the gates of a foreign city and Kull easily bribes the guard to assist him by dangling a gift of a gold bracelet before his greedy eyes. Kull is disgusted that the civilized man is so willing to compromise his principles. Once more, the king lacks the self-awareness to perceive that in resorting to bribery, he is guilty of the same moral compromise.

There is an effective scene in the tavern where the old crone leads Kull to Lala-ah’s love nest in the city slums and the two fugitive lovers narrowly escape the king’s wrath. The reader may experience an immediate sense of déjà-vu in recognizing that Howard will later re-work the scene for the classic “Rogues in the House” when Conan confronts his unfaithful paramour and her new lover in a nearly identical setting.

Howard excels in giving life to these medieval cesspools and makes good use of familiar imagery from westerns. Successfully grafting Old West fixtures onto a sword & sorcery setting helps engender a subconscious sense of comfort for the reader to accept the reality of the fantasy world.

From there the chase resumes leading to an unresolved climax on the River Stagus with Karon the skeletal ferryman. Howard recycles Charon at the River Styx from Greek mythology and mixes in bits of Arthurian legend. 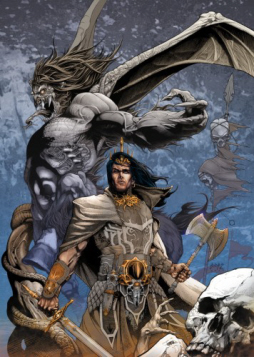 Howard was a writer usually able to produce original results with familiar material. As “Beyond the Sunrise” builds toward its unresolved climax, Howard’s confidence suddenly failed him and he was lost in how to resolve the story with multiple influences competing for dominance in his mind.

As he tended to do, Howard abandoned the story only to rework it, cannibalizing ideas wherever possible with wildly differing results. “Beyond the Sunrise” metamorphosed into “The Cat and the Skull.” This latter story made it into print forty-three years ago in the first collection of Kull stories published (where it appeared under its original title, “Delcardes’ Cat”).

Sadly, the opening paragraph must rank as one of Howard’s poorest and never fails to make me wince.

“King Kull went with Tu, chief councilor of the throne, to see the talking cat of Delcardes, for though a cat may look at a king, it is not given every king to look at a cat like Delcardes’. So Kull forgot the death-threat of Thulsa Doom the necromancer and went to Delcardes.”

Though quite different from the opening of “Beyond the Sunrise,” it is no better for the change. Howard was clearly struggling creatively, but was determined to overcome the problem.

Interestingly, Lala-ah’s desire to wed a man of her own choosing becomes the plot device that carries over into the new story with the bewitching noblewoman, Delcardes desiring the king’s permission to wed a foreigner. This time Kull does not merely hear of the situation, but has an audience with the noblewoman. This is a considerable narrative improvement over its predecessor.

Delcardes’ cat is said to be oracular. Howard telegraphs the punch-line almost immediately by giving the cat an ever-present veiled servant who is obviously practicing ventriloquism and taking advantage of the gullible barbarian. Amazingly, Howard waits until the end of the story to tip off the reader who likely figured it out straight away.

Howard was apparently taken with the idea for he repeats the veiled ventriloquist concept in the later Conan story, “Jewels of Gwahlur.” The concept works much better there where Howard does not underestimate the reader’s intelligence and has his barbarian hero quickly expose the ruse. 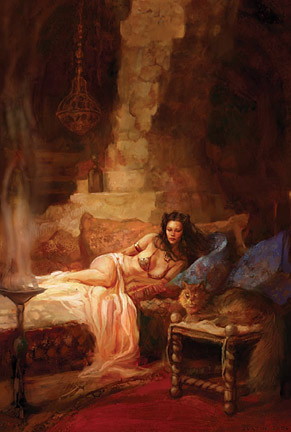 Instead of the pale insults hurled by Lala-ah’s foreign lover in “Beyond the Sunrise,” Kull here must contend with the death-threat of the sorcerer Thulsa Doom. As an aside, I’ve always wondered if Howard intended the “Th-” to be pronounced Viking-style as a simple “T-“ (i.e. “Thor” as “Tor”). This would render the character’s name phonetically as “Tulsa” Doom. Given the Texan’s proximity to Oklahoma and love for the western genre, the name always struck me as possibly derived in this fashion.

In giving Kull an arch-enemy in the skull-faced Thulsa Doom, Howard was attempting to link this story to the first published Kull story, “The Shadow Kingdom” which concluded with Kull vowing to rid the world of the Serpent-Men. Howard establishes Thulsa Doom as seeking vengeance on Kull for his war with the Serpent-Men.

Unfortunately, the sub-plot with Thulsa Doom never quite works and despite the merit of the idea; Howard needed further rewrites to perfect the concept. He would never take the time to do so leaving it to the various continuation-writers to flesh out the character in ways Howard never intended.

Kuthulos, the veiled servant of the allegedly oracular cat, is revealed to be a great scholar at the story’s conclusion. The story reaches farcical proportions with the scholar Kuthulos posing as a servant providing the voice of a false oracle only to reveal the servant to be a disguised Thulsa Doom posing as Kuthulos providing the voice of a false oracle. It is hardly surprising that Howard slips and at one point has the underwater inhabitants of the Forbidden Lake claim to know the oracular cat only to have it proved false mere pages later.

The entire visit to the Forbidden Lake (a ruse of Thulsa Doom’s to lead Kull to his death) is very sketchily written. Howard intends the sequence to be a series of labors for Kull to prove his heroism, but the poorly written wrestling matches with an octopus-human hybrid, giant water spiders, and shark men prove both repetitive and ineffective.

Howard does make good use of the Lake Men for a further philosophical discourse. Much like his conversations with the false oracle, gives Kull an opportunity to argue Free Will vs. Predestination. 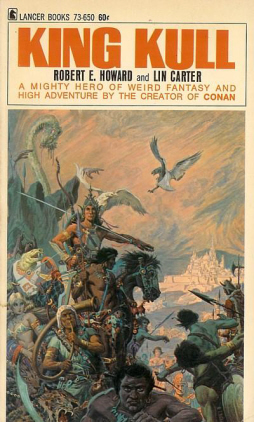 Kuthulos and Thulsa Doom were combined shortly thereafter into one character, Kathulos of Atlantis, the titular “Skull-Face” of Howard’s variation on Sax Rohmer’s Fu Manchu series which placed the character in contemporary Chinatown. Howard wasn’t done with the scholarly Kuthulos as he gave him a pivotal role in his third attempt to continue the Kull series.

“The Screaming Skull of Silence” stays closer to the mystically-themed “The Mirrors of Tuzun Thune” by having Kuthulos tell Kull of the mythical Raama who conquered Silence. The concept of Silence as an entity that threatens Existence is, along with the idea of fixed points in time that may not be altered, familiar to viewers of recent seasons of the BBC’s Doctor Who. Howard’s approach is much the same with a very effective climax of Kull striking a gong that gradually builds in sound to vanquish Silence.

Unsurprisingly perhaps, Howard’s fourth and final variation on the theme was entitled “The Striking of the Gong” and sees Kull briefly crossing over to the Afterlife when he is set upon by an assassin. The titular action is the sound he hears upon his entrance to and exit from this metaphysical limbo.

The story shares more than continuing strands with its predecessors, it also shows Howard’s perhaps subconscious building of stories on themes rather than action-filled plots. This is what separates him from most of the sword & sorcery writers who followed in his wake.

The introspection of these ongoing explorations of the nature of reality, the existence of an Afterlife, and the concept that time and space are merely products of the limitations of mortal minds leaves the knowing reader with a bitter aftertaste for Howard would give himself only seven more years before, like Kull, he peered behind the veil to glimpse the world beyond the sunrise.

It’s worth noting that Lin Carter wrote a satisfying conclusion to “Beyond the Sunrise” in his 1980 collection LOST WORLDS (which was one of the best books Carter ever produced). The Howard/Carter combination was retitled “Riders Beyond the Sunrise” and is one the strongest stories in this collection of very strong sword-and-sorcery.