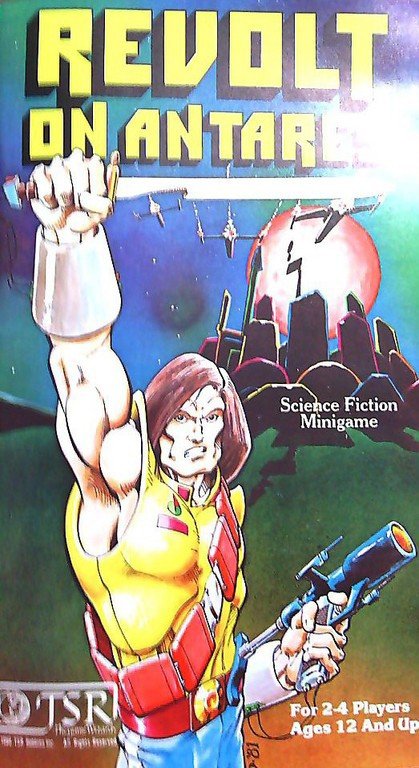 The rulebook for Revolt on Antares

A couple of weeks ago here at Black Gate, I wrote about the 1983 tabletop roleplaying game Lords of Creation, created by the late Tom Moldvay. Unfortunately, while listing some of Mr. Moldvay’s works, I left out a small but important game, Revolt on Antares.

Published in 1981 by TSR, the producers of Dungeons & Dragons at that time, Revolt on Antares was a minigame, sometimes referred to as a microgame, which were popular at the time. Other minigames of the period included Vampyre and Viking Gods, both from TSR, and such games as Ogre and Car Wars, each produced by Steve Jackson Games. These were just a few of the minigames available back then, and for a time in the early ’80s minigames brought a fair amount of business for game publishers.

As for Revolt on Antares, it was a simple war game made for two to four players. The game took place on the planet of Imirrhos, also known by the name of Antares 9, the ninth planet in the Antares solar system. All that was needed for play was the short, simple rule book, the included map, and two six-sided dice, also included. Oh, and I can’t forget the cardboard playing pieces, referred to in the rule book as counters, especially as there were three types: troops, leaders, and artifacts.