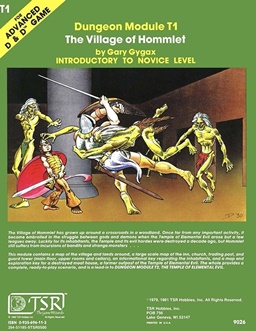 You might have noticed the name ‘Modular’ being tagged onto the front of some gaming-related posts over the past several months. Well, being the savvy folks we are we here at Black Gate, we know that Role Playing Games (RPGs), whether tabletop or electronic (Pc/video game/MMO) are immensely popular. And we periodically post about RPGs, in addition to other types of games: such as this one I did on the Dungeons and Dragons Board Game line. And because we’re an on-the-ball kind of website, we’ve noticed that those posts do pretty well.

So, beginning in January, we’re kicking off a regular gaming column called…. you guessed it, ‘Modular.’ The primary focus will be on Role Playing Games, but we want to write about all kinds of fun games and gaming-related topics such as movies, television shows, books, etc. Posts will be written by various Black Gate contributors, and we’re also going to invite some industry folks to come visit, like we did with our popular ‘Discovering Robert E. Howard’ series.

I’m really excited about ‘Modular,’ as I think we’re going to be presenting you with some great stuff – both contemporary and nostalgic. From pen and paper Kickstarters to Dungeons and Dragons history. To give you a taste of what’s coming, the following was intended to be one of the first posts in the series next year. It’s a look at just about my favorite module, T1 – The Village of Hommlet. And as I mention at the end, there’s going to be a follow up post with my thoughts on why The Temple of Elemental Evil was delayed for several years.  If you’ve got a topic you’d like us to cover, or even something you’d like to write a post about, email me at upabob@yahoo.com. The latter is how I ended up with my own column, ‘The Public Life of Sherlock Holmes,’ here at Black Gate. So….

The golden era of my RPG life is Advanced Dungeons and Dragons (AD&D).  To prepare for this post, I sat down and read my favorite AD&D module. Now, there are quite a few which I’m still fond of and would like to play again. But T1 – The Village of Hommlet is the leader of the pack. Surprisingly, I’m not particularly crazy about T1-4, The Temple of Elemental Evil (ToEE), the much-delayed sequel, which is usually listed near the top of every “All-Time Greats” list. For me, Hommlet is a completely self-contained adventure in and of itself.