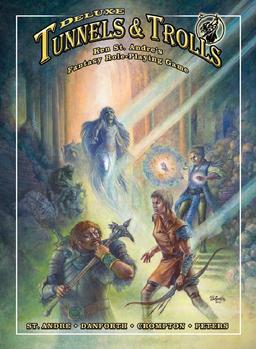 Back in 1980, on my last day of my first year at secondary school in the UK, an 11-year old me saw a kid with a copy of the paperback Advanced Dungeons & Dragons Players Handbook. I’d discovered Tolkien a year or two earlier, and, leafing through the book, the pictures of dragons and swords and — most particularly — the dungeon map and diagram of the Planes of Existence at the back both enchanted and fascinated me. But as an 11-year-old I hadn’t much pocket money, and on the first day of my summer holidays and clutching a single sheet pricelist catalog from Games of Liverpool, I spent £1.75 on the only thing I could afford which looked even remotely similar — a slim booklet called Buffalo Castle.

I had no idea what I was doing. When the booklet turned up at my house a few days later I realized it wasn’t even a complete game, but part of another game called Tunnels & Trolls — something called a “solo adventure.” Undaunted, I made up my own rules, played the hell out of Buffalo Castle, and made up several solo adventures of my own — and saved my pocket money for the rule book for Tunnels & Trolls.

Completely accidentally, I’d stumbled onto a path which would shape my whole life.

Fast forward 35 years (and try to say “35” quickly so you don’t feel it…). A couple of months ago I bought the newest and greatest ever edition of the Tunnels & Trolls roleplaying game, funded by Kickstarter over the past couple of years and only now hitting games stores and general release. Designed and written by Ken St. Andre, Liz Danforth, and James “Bear” Peters, and dubbed Deluxe Tunnels & Trolls, it’s effectively the 8th edition of the rules — but unlike many other RPGs, even this 8th edition isn’t too far removed from earlier editions, and if (like me) you grew up on the 5th edition rules, you won’t find yourself in too foreign territory. It’s very much the same game — just better.