By David B. Coe 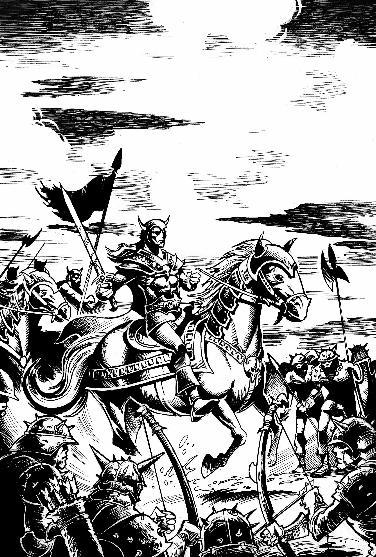 When Ilias was directly overhead, his red glow mingling with Panya’s white to give a rose cast to the grasses and stones, Carthach climbed to his feet and started toward the southern edge of the camp.

Apart from the sentries, few were awake. Yet the camp was alive with sound. Horses snorted and nickered. Some of the soldiers cried out in their sleep. Others murmured, as if engaged in conversation. The breathing of the sleeping warriors made the entire plain hum, until it seemed the earth itself was whispering to him.

Carthach had to keep himself from looking around to see if he was followed. The sentries would have noticed him, but he was a battle group commander. None would question him unless he acted as though he expected to be questioned. So he just walked, his eyes trained on the small cluster of trees before him.

“Do you need something, Commander?”

He stopped, his heart abruptly racing like a warhorse. After a moment he made himself turn slowly and smile. It was a young woman, her battle armor seeming to glow with Ilias’s red and the golden light from her torch. Her white hair was pulled back from her long, thin face, and the yellow of her eyes was so pale it was hard to tell where the whites ended and the irises began. She couldn’t have been more than a year or two past her Fating.

Are we really meant to be warriors?

“Thank you, no,” Carthach said, trying to keep his tone light. “I can’t sleep. I thought I’d take a walk.”

She hadn’t drawn her sword, but her stance and the expression on her face made him feel as though the point of her blade was pressed against his chest.

“Yes,” he said, allowing a note of impatience to creep into his voice. “Is that a problem?”

She shook her head, her retreat apparent in the widening of her eyes. “No, Commander. Of course not. I just — ”

“Good. Carry on.” Before she could say anything more, Carthach turned away and continued toward the trees. He could feel her watching him, but he didn’t turn again. Slowly, his pulse began to slow.

He found Braedor waiting for him on the far side of the coppice. He could hear the river gurgling in the distance, and beyond it, the singing of Braedor’s army. The Forelander looked annoyed, as though he had been waiting for some time. He wore no helm or armor, and, as the northmen went, he was not particularly large. Still, he was taller than Carthach and far more powerfully built. His dark face appeared ruddy in the moonlight. His short black beard seemed to bristle like quills on a hedgehog.

This is a warrior, Carthach thought, measuring Braedor against the young guard he had just left. A man like this had no need of magic. Two swordsmen stood on either side of the northman, and three archers stood a few paces behind, eyeing the trees warily, arrows nocked.

Abruptly, the Qirsi felt small and vulnerable, like an innocent caught between two advancing armies. The traitor walks a lonely path. Carthach had heard the saying before, but until that moment he had never truly understood it.

“One last day before the Night of Two Moons,” Braedor said, his voice cutting through the dark like torchlight. “Everything is ready for tomorrow?”

“Yes. It’s just as we discussed. I’ll be leading the advance. Hanan, my Weaver, will be to the west. He rides under a yellow and black banner, and like all our Weavers, he wears his colors over his armor. Amara and Wazir are Weavers as well. They ride to the east, Amara under a banner of red and white, Wazir under silver and blue. The others –”

Braedor cut him off with a gesture. “The others can wait. With these three dead, we should control the south by nightfall, correct?”

Carthach swallowed, then nodded. “By nightfall.”

“Your people are powerless without the Weavers?”

He stared at the Eandi. Hadn’t the man been listening at all the past few nights? “No, not powerless. Not in the least. The Weavers allow us to combine our powers, to draw on each other’s strength. Even without the Weavers, we still have magic. But fighting on our own, we’ll tire more quickly, and our magic will be far less effective.”

Braedor nodded. “Good.” He hesitated, nodded again. “That’s good.” He rubbed his large hands together, though even here, closer to the river, the night wasn’t particularly cold. “Is there anything else?”

Yes, you fool. A good deal. My gold, your promise of asylum, your guarantee of safety for my men. Carthach took a long breath. “Your men know not to hack us to pieces when we ride forward?”

“And my battle group?”

“We’ll do everything we can, Commander. But please remember, war is not a precise endeavor. Your warriors know nothing of your… choice?”

Carthach regarded the man closely, looking for some sign that he was being mocked. Seeing none, he shook his head. “No. I’ve told them nothing.”

“I thought as much,” Braedor said with a nod. “Then they’ll be fighting us. We must protect ourselves. You understand that. But we’ll try to kill as few of your men as possible.”

Carthach’s eyes strayed to one of Braedor’s swordsmen, a hulking man with a thick moustache and deep-set dark eyes. The warrior was glowering at him, one hand resting on the hilt of his blade and the other flexing repeatedly, as if it was all he could do to keep himself from killing Carthach right there.

I’m leading them to a slaughter, he thought. Yet, what could he do? Braedor was right. The Forelanders could offer no guarantees. And even if they could, he was in no position to demand them.

“You’ll have my gold?” he asked after several moments.

Braedor grinned, although Carthach could see the contempt in his eyes. “All of it.”

“What will happen to the other –?”

The northman raised a hand abruptly, silencing him. His gaze was fixed on the trees behind Carthach. “You’re certain you weren’t followed?” he asked in a whisper.

Carthach spun and scanned the coppice. “I don’t think I was.”

“You don’t think you were?” Braedor repeated, his voice rising.

Before Carthach could answer, he heard a light footfall.

“Is that you, Commander?” a woman’s voice called.

The guard, he had time to think. Then a bow thrummed and Carthach heard her topple to the ground. He and Braedor rushed forward and found the woman lying face up, an arrow through her throat, her blood glistening in Ilias’s glow.

“You idiot!” Braedor said in a harsh whisper.

Carthach could say nothing. He just stared at the woman. He wanted to bend down and close her eyes, but he couldn’t even bring himself to do that.

Braedor spat a curse. “What are we supposed to do now?”

“Nothing,” Carthach heard himself say, his eyes still on the woman. “Nothing at all.”

“If someone finds her, they’ll just assume she strayed too close to one of your patrols.” He looked up, meeting the northman’s gaze. “This changes nothing.”

Braedor eyed him for several moments. “Very well. Until tomorrow then.” He turned away and started back toward his camp, gesturing for his archers and swordsmen to follow.

Carthach watched them go before turning himself and making his way back to where his warriors slept. He didn’t look at the woman again, but he felt as though her eyes were on him once more, watching him walk away.

He returned to where he had been lying before his meeting with the Forelander, taking care not to be seen by the few Qirsi who were still awake. Sitting among his warriors, he watched the morning dawn, warm and clear. The sentry had been on the night’s final shift. No one came to relieve her, and no one noted her absence.

As the Qirsi warriors began to stir around him, Carthach stood, stretching the night from his legs. Jerel caught his eye from where he sat, a short distance away.

“Did you sleep at all?” he called.

Jerel nodded, as if satisfied. A moment later he barked a command at the men and women sleeping around him, and they began to rouse themselves as well. Carthach’s warriors checked their weapons and readied their horses.

To the south, the armies of the Forelands resumed their singing, their voices sounding far closer than they had the night before. Carthach heard a horse approaching, and turning to the west, he saw Hanan riding toward him, white hair flying behind him, his yellow eyes glimmering like gold in the early morning light. A man rode beside him bearing a yellow and black banner that snapped loudly in the wind.

“You lead us today, Carthach jal Terad,” the Weaver said, reining his white mount to a halt just in front of him. “Orlagh smile upon you and guide your blade.”

The ritual words. Carthach heard one of his men vomit behind him. The Weaver frowned.

“We fight for the glory of Qirsar,” Carthach replied, the words coming to him as an oft-repeated lesson might come to a child. “Our magic is yours, Weaver. Use us well.”

A smile stretched across Hanan’s face and then was gone. “Your warriors are ready?”

Hanan wheeled his horse away almost before Carthach got the words out. He’ll be dead by sunset, Carthach told himself, watching the Weaver go. The thought gave him some comfort.

The complete version of “Night of Two Moons” appears in Black Gate 4.