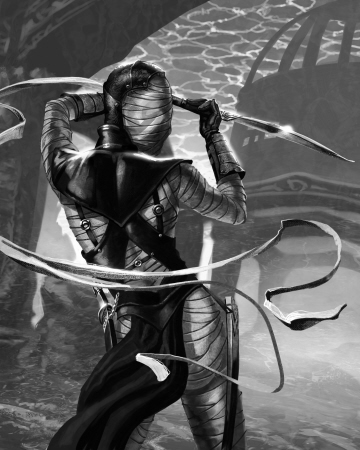 It was all about lohan and death. Newyn, like all assassins, wore more than one protective amulet; the deathbed curse of the most mundane merchant could reverberate for generations. The amulets themselves were created in blood — goat’s blood, Newyn hoped. The village witch who rowed Newyn to the tainted place was likely limited to easing arthritis and blessing boats, but at one time in her life, she had evidently needed lohan badly enough to sever two of her fingers. And the ocean cove the locals called ya sangra liu — the bloody harbor — no one knew what had happened there, except that once it had not been filled by the sea.

“There.” It was a toothlike stone structure that stuck out of the water to roughly waist-height, and it stood alone in the middle of the miniature bay. “They find his boat tied up there. That’s the stair. Everyone knows, you walk down that way, you can breathe.”

Newyn studied the protrusion. It was manmade, circular, perhaps the ruined top of a tower. Despite the irksome rocking of the rowboat, this place was shielded from the worst waves, and brown ugly seashells of some sort had wedded themselves thoroughly to the stones. “Do you breathe water, like a fish, or is there air?”

“You’re not floating, if that’s what you mean.” Unlike most of the villagers, the witch looked straight at Newyn when she wasn’t managing the oars. “You can walk, run, speak if you find anyone to speak to. Near enough to air, even if the fish swim in it.”

“And others have gone down, and come back.”

The witch half nodded, half shrugged. “Come back, yes. But not always whole.”

“Some folks come back ranting about gold.”

Newyn let out a single high, harsh note of laughter. The witch didn’t actually jump, as many had in the past, but she swiveled to regard Newyn warily. “I’d think you might like gold.”

At least she said what she thought, unlike the rest of these fools. “Oh, I do,” Newyn said, so softly it was almost a hiss. “I do.”

It was time for a change of subject. “You’ll check for me before sunset, and again after sunrise.”

“For a week,” the witch agreed. “Someone stays down there that long, they’re down for good.”

“Ah. Yes. And how long has this boy been down?” The witch didn’t bother to repeat the answer — ten days — and Newyn realized the barb came from her nerves. Even she understood a mother’s need to try again, and again. “Well enough. Get us there.”

The witch maneuvered the oars.

The little craft drew alongside the tower. Newyn grasped the stones, tested her grip, and prepared to heave herself out of the rockable boat without actually rising above a crouch. The witch put out a hand to stop her.

Newyn looked at it. The rural hag hadn’t actually touched her, but the urge to do something precipitous was strong. At the very least, a salt water dunking…

“Assassin.” The witch pulled something from her skirt pocket. “Take this with you.” It was a fragment of old rope, probably worn out fishing line, strung with a few feathers and a sharp black stone tooth. “For protection.”

There are children in Altirn who make better amulets, woman. But hell’s knew, she got little enough well-wishing. “Thank you.”

Newyn knotted the ridiculous thing around her neck and got out of the boat.

“Stair” was an overly optimistic description.

The stair of ya sangra liu was a rough stone tower with the shattered lip just above the waves. Inside the walls, the surface of the water appeared calm, ruffled only minutely in comparison to the waves outside.

It did not soak through Newyn’s clothing. And when she ducked her head beneath the apparent surface, she felt no difference in the atmosphere beyond a faint coolness. Either the water was a film as thin as a soap bubble, or Newyn was now breathing water and finding it as natural as air. Which is it, I wonder?

Wizards tended to smile at such questions, a sort of smile that Newyn especially disliked, and say, “Thus, lohan.” How could one thing be two things and neither? Thus, lohan. How could it be eternal night in Ashralien while the sun still rose and set? Thus, lohan. Does it matter, as long as I can breathe?

It matters a great deal if it stops doing it. Still, even tainted lohan rarely killed outright. It waited for a person to break the rules. The trouble is, it never tells you what the rules are.

A stone staircase had once spiraled up inside the tower, presumably to a lookout post at the top. Now, the stairs were frequently broken and missing. Newyn sometimes had to leap more than the length of her body. She found herself wishing for rappelling equipment underneath the ocean, and the incongruity made the face beneath her mask twitch with amusement.

The shaft boomed and hissed with the waters. It was like climbing inside a drum. Small, cone-shaped snails grazed on the scummy walls. On one step, there was a squat, leafless flower-thing with disturbingly prehensile petals. As Newyn descended, some of the wall’s seaweed looked more purple than green.

Newyn made her way through greenish shadowlight. Something like a lobster, more brown than red and more insectile than appetizing, shot violently backwards from Newyn’s groping foot. Clumsy, she thought calmly even as she rocked for balance. You should have seen him first.

The stuff on the walls was going to leave a nasty stain on her gloves. Beyond her fingers, the slime floated, smokelike; it, at least, definitely behaved as if it were underwater. Yet Newyn felt normal, breathed and moved without trouble, and her vision was not fogged or distorted, only troubled by the dimness.

By the next jump, the light was even worse. Newyn considered briefly and then pulled out her package of sulfur flares. If they didn’t work, after all, she wanted to know. And she did have a sufficient supply. Lythan had taught her not to skimp.

A moment later, annoyed but unsurprised, Newyn poked two well-scraped, useless flares into another fat flower and got a nasty shock when the thing grabbed for her fingers.

Only the supreme unwisdom of random violence near lohan-taint saved the thing from a messy knifing. It was not, Newyn decided, several fast heartbeats later, a major threat to her; the hideous growth was small and firmly rooted. All the same… I hate plants that move, Newyn thought. I truly hate plants that move.

The green and purplish seaweed was joined by small patches of faintly glowing material. Evidently the lohan wanted Newyn to see what was coming for her.

In blithe disregard to the lohan-taint and the air-breathing creature regarding it, a shrimplike thing bobbed beside the wall, groping with giant antennae. It could even be a true shrimp for all Newyn knew. She had seen them raw, in the market, but never alive. She poked another sulfur flare at it to find out if shrimp, too, had a hostile side.

Shrimp looked ridiculous when trying to move fast, but that was all.

There was a gap of perhaps six steps, a jut of stone that might have been a landing, and an open doorway in the side of the tower. Newyn was not yet at ground level, or the sea floor, depending on how one looked at it. As far as she could see in the gloom, the shaft kept descending. Below the door, however, the stairs had been shattered and eroded to the point that even she could not make much use of them.

She measured the space with her eyes, like a cat, and jumped. She landed in the doorway, crouching, hands on her knives out of habit.

Other than the blatant presence of the ocean, the walled walkway was innocuous. The hiss of the water was softer, but even more pervasive. There was no roof, and the path curved in the distance. I am on the city wall. Guardsmen patrolled here, once. Or, given the city’s fate, perhaps soldiers instead.

The seaweed didn’t hang, here. It swayed, rippling in unison to the waters steady beat, as if Newyn were walking down a living artery. I truly hate plants that move. But at least this stuff gave no impression of purpose.

There were nasty little flowers here, as well. Newyn avoided them. Once, she saw one grab for a fish, which bolted out of reach like a startled sparrow.

A flat, undulating pancake of a fish, either stupid or curious, bumped against Newyn and goggled at her with froggish, top-set eyes. It fluttered on down the hallway and settled to the floor, doing a remarkable imitation of a rounded flagstone. Newyn shook her head silently; her clothes still felt as dry as they had been in the rowboat, although they, too, moved with the current.

There was a gap in the wall ahead. Newyn approached it warily. Then she looked out and had to stand still for a moment in admiration. If the lohan was going to kill her, it was certainly putting on a good show first.

The stair had been a watchtower. As Newyn had already guessed, this path lay along the top of a thick, protective wall. Within the wall, laid out at Newyn’s feet, was the city.

Ya sangra liu must have been a stately, prosperous trade port when she was alive. Beneath the pennons of trailing weed were high, arched roofs; underneath seashells that clung and seashells that crawled, white marble glinted. Small fish, large fish and some startlingly colorful fish replaced pigeons in the squares, and in the nearest street Newyn could see the decayed remains of a cart. The water was sunlit and as transparent as air, as if the lohan were boasting of the metropolis’ former glory. There was no horizon, though. City, sea, and rippling sky vanished into blue.

“Well enough,” Newyn murmured aloud. So. Enough gawping, woman. If you were a stupid little boy, where would you look for gold?

The voice of her own childhood said, steal it, hide it, kill to protect it, but Newyn suppressed that ruthlessly. An ordinary boy. Where?

The palace, of course.

It was an egg-shaped dome, half collapsed, with the slightest remnant of gilding visible even from this distance.

Newyn moved on, down into the streets of the sunken city.

The complete version of “The Wine-Dark Sea” appears in Black Gate 14.