Sterling Lanier occupies a unique and honored place in science fiction history. While he’s fondly remembered for his fiction, his greatest contribution came as a result of his keen eye, and his editorial daring.

In 1961 Lanier was hired as an editor at Chilton, a Boston publisher specializing in business magazines and automobile repair books. In 1965 he convinced Chilton to publish their first novel, an oversized science fiction epic that had been rejected by nearly twenty publishers due to its prodigious length. That novel, Frank Herbert’s Dune, eventually became a bestseller, launching one of the most respected literary franchises of the 20th Century, and completely remaking SF publishing. 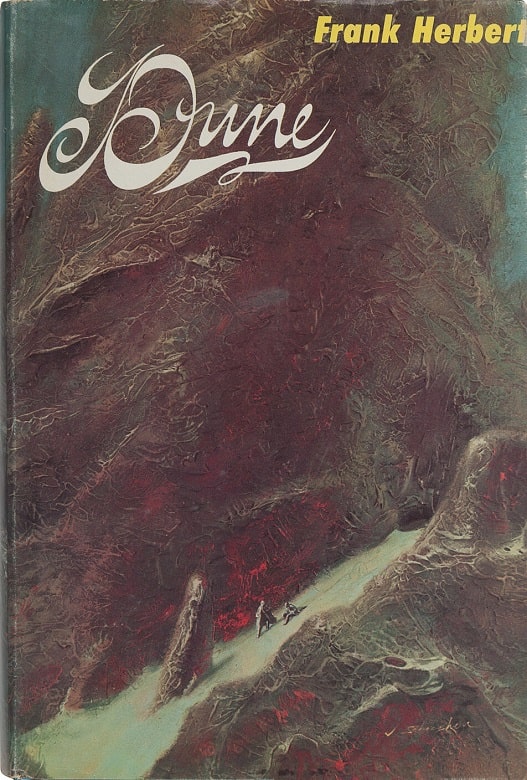 Unfortunately, though Dune eventually became a huge critical and commercial success, that success came too late for Lanier. Here an excerpt from the publication history of Dune at Wikipedia.

The serialized version was expanded, reworked, and submitted to more than twenty publishers, each of whom rejected it. The novel, Dune, was finally accepted and published in August 1965 by Chilton Books, a printing house better known for publishing auto repair manuals. Sterling Lanier, an editor at Chilton, had seen Herbert’s manuscript and had urged his company to take a risk in publishing the book. However, the first printing, priced at $5.95 (equivalent to $51.16 in 2021), did not sell well and was poorly received by critics as being atypical of science fiction at the time. Chilton considered the publication of Dune a write-off and Lanier was fired.

Horrible as that sounds, Chilton’s loss was our gain. By the early 70s Lanier had turned his attention to writing, and in 1974 Frederik Pohl took a chance on his second novel, a rousing adventure set in a post-apocalyptic United States, Hiero’s Journey.

Hiero’s Journey was originally published in hardcover by Lanier’s old publisher Chilton in 1973; that edition, like Dune before it, vanished with barely a ripple. When we hold up publishers as shining examples of how to promote a novel, let’s just say Chilton doesn’t often get a shout-out.

But Fred Pohl, like Lanier himself, knew a winner when he saw one. In 1974 Pohl was editor at Bantam Books, where he’d launched the Frederik Pohl Selection paperback imprint. The first two volumes, Commune 2000 A.D. by Mack Reynolds and Star Rider by Doris Piserchia, had done well enough, and in coming years Pohl was to cement his own reputation as an editor with volumes five and six, Dhalgren by Samuel R. Delany and The Female Man by Joanna Russ. In 1974 Pohl chose Hiero’s Journey as the third Frederik Pohl Selection, rescuing it from obscurity and turning it into a minor SF classic.

There were eleven Frederik Pohl Selections in total:

It’s a damned impressive roster, and makes a great list if your SF reading group is looking for a winter project.

Back covers of Hiero’s Journey and The Unforsaken Hiero

Hiero’s Journey is still read and enjoyed today — and frequently referenced as an inspirational source for a lot of science fiction that followed, including Dungeons and Dragons and (especially) Gamma World. It was listed as one of the key inspirations for Gary Gygax in Appendix N in the back of The Dungeon Masters Guide.

Over at Tor.com, Alan Brown offered a fond retrospective of the book 46 years after it was originally published.

I decided to give it a try, and was glad I did. It became an instant favorite: a fast-paced adventure built around a compelling character facing impossible odds… I think it was the cover blurb that sold me on the book when I first saw it (that, and its designation as “A Frederik Pohl Selection,” always a sign of a good story)…

Hiero’s Journey is also rooted in a world ravaged by nuclear exchange, with descriptions of radioactive wastelands and ruins called “First Strike” cities. There were also plagues… The small and scattered remnants of humanity compete with a wide range of animals that have become intelligent, with more than a few of them having grown to gigantic proportions. Moreover, there is an evil death cult that’s eager to finish the job and destroy all forms of life not under their control. The book is an example of what the Encyclopedia of Science Fiction, or SFE, calls “Ruined Earth” stories.,,

The novel opens with Per Hiero Desteen, Secondary Priest-Exorcist, Primary Rover and Senior Killman of the Church Universal, traveling through a swamp with his Bull Morse, Klootz (a morse being a moose bred to be ridden like a horse). Hiero has telepathic powers, which include telepathy and weak powers of precognition. He has a telepathic rapport with Klootz, who has a sardonic and delightfully non-anthropomorphic personality… Hiero and Klootz move deeper into the swamp to avoid a herd of buffer [and] then encounter a three-ton snapping turtle, an indication that the dangers of wildlife in forests have been dialed up to 11…

Hiero soon meets a young bear named Gorm, another delightful non-human character; Hiero eventually realizes that Gorm has been sent on a mission by his own elders that’s similar to Hiero’s assignment… This interesting party soon meets S’nerg, a repulsive bald man who is a representative of the Unclean, an evil order that controls evil animals… Thanks to Gorm, Hiero is able to break free of the evil man’s mind-control, and they escape with some of his foul devices… There are other encounters with the Unclean, each with increasingly high stakes…

A simple recap doesn’t begin to capture the charm of this book… The message that mankind should take care of the Earth runs throughout the story, but it is a sentiment that is hard to disagree with, and the moral never seems heavy-handed. Unlike many other science fiction stories, the story has withstood the test of time, and the environmental message is just as relevant today as it was when the book was written. If you are looking for a good old-fashioned, enjoyable adventure story in a creative setting, then this is the book for you.

Nearly a decade after publishing Hiero’s Journey Lanier produced a sequel, The Unforsaken Hiero, published in hardcover by Del Rey in 1983. The same year Del Rel also returned Hiero’s Journey to print, releasing both volumes with covers by Darrell K. Sweet (see above). 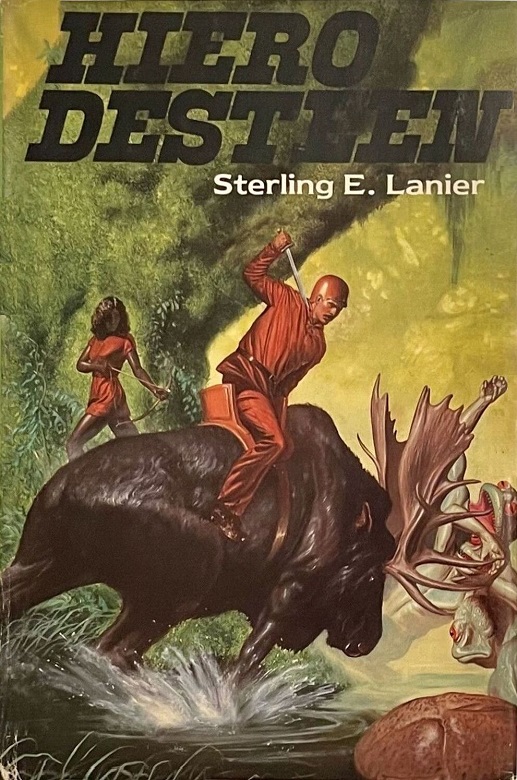 While Lanier clearly planned a third book to round out the trilogy, it was never published. In 1984 the Science Fiction Book Club released a one-volume omnibus edition of the first two, Hiero Desteen (see above).

What about The Unforsaken Hiero then? Joseph at Goodreads offer a fine synopsis:

Word of warning: This book ends with, well, not a cliffhanger per se but with major plot threads dangling — it’s obvious that Per Hiero Desteen’s story was supposed to run on for at least one more book. Ah, well.

Again Hiero is making his way across the war-scarred ruins of what used to be North America. He visits different areas this time, including our first glimpse of a relatively large & civilized realm; and the forces that schemed from the shadows in Hiero’s Journey march openly to war.

Old friends reappear (although they don’t have as much time onstage as might have been preferred) and new wonders & terrors await.

Here’s the publishing details for both Del Rey editions.

Sterling Lanier published one more novel, Menace Under Marswood, in 1983. He died in 2007.

I’ve had a copy of that original 1974 Bantam paperback edition on my shelf since the book was published…and of course I’ve never gotten around to it. But no more! I now vow I will read it…um…sometime soon. (“Soon” being loosely defined, of course!)

I was too young to buy that Bantam edition (I was nine when it came out), but even in the late 70s and early 80s, this book was still being discussed as a minor classic. Give this one a place of honor in your TBR pile Thomas, and let us know what you think.

I remember really enjoying this book as a teenager, but very little of what it was about. I got my brother the sequel for his birthday (I came across an old second-hand copy in Dublin) but never did discover what he thought of it. I did read something a few years back – based on a recommendation made here on Black Gate – which had the same kind of vibe about it: West of January by Dave Duncan.

You’re absolutely right. Violette Malan reviewed WEST OF JANUARY for us back in 2015, calling it “brilliant.” Like HIERO’S JOURNEY, it’s a solo odyssey across a dangerous and fantastic science fictional landscape. 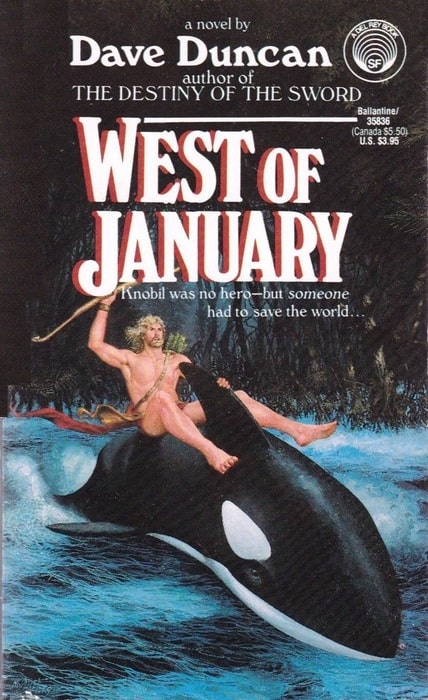 It’s been a while since I’ve talked about Duncan in my VINTAGE TREASURES columns. I should correct that.

Think the guy wrote fifty books – after a late start – so plenty to talk about!

Admission time. My penchant for buying a book by its cover has backfired. I came across the Panther Gino D’Achille cover and skipped, thinking it looked like a juvenile. Now I am kicking myself, especially as now that I inspect the cover in detail along with the backstop, the art is spot on.

I hadn’t seen the Panther UK cover before, but it didn’t take long to find it. And I see what you mean. It’s not something that could catch my eye right off the bat either…. but I think it’s a very appropriate cover for the book. 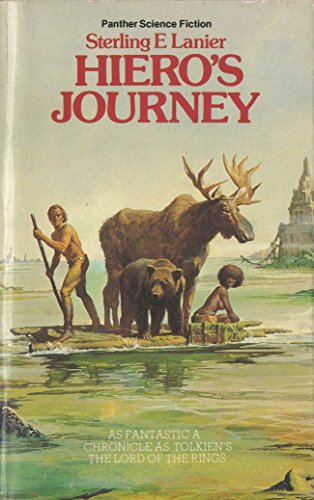 John, you did a post on this author several years ago and it immediately pushed me to track down a copy of Hiero’s Journey. I loved it! And it’s still on my shelf!

I almost forgot about that old Appendix N piece I wrote back in 2013! Your memory is clearly better than mine. 🙂

And for those too lazy to click that link, here’s what you said in the Comments way back then, an insight that I thought was right on point:

“Just finished Hiero’s Journey and loved it! I thought it was highly innovative, from my perspective, for a 40 year old book. I’ll have to track down the sequel.

As an aside, I think I like the 1980s Del Rey Darrell K. Sweet cover better than the original that John suggests. I think Sweet’s cover communicates something of the feel of the book that the original does not. The original cover makes me feel that the book would be something totally different from what it actually was. I found the Sweet cover to be suggestive, and correctly so, of the overall mood of the book.”

I never tracked down the sequel. 🤔

Weirdly, the title that jumps out at me from the Pohl Selections list is Tetrasomy Two by Oscar Rossiter, a book that I bought and read decades ago and still wonder if it really existed as I have not seen mention of it in the passing years since.

Oh, and yes, I have a copy of Hiero’s Journey, with the Darrell Sweet cover, sitting atop the TBR pile. Often wondered if I should wait to nab The Unforsaken Hiero, but it seems as though holding off is not the best strategy.

So happy to see these get some attention! Hiero’s Journey was in my dad’s bookcase and I first read it (covertly) when I was about 8. Didn’t quite understand the love interest parts at the time, but wow o wow, I loved that world. ‘Leemute’ was my favourite insult for a while. Wore out the original paperback and when looking to replace it, had the joyous revelation of there being a *second* book.