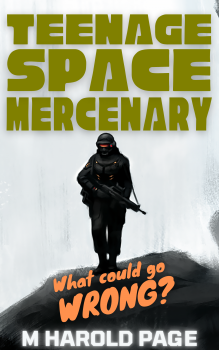 That is a slight oversimplification of M. Harold Page’s mission as a fiction writer. Let’s get the whole thing: “The exploration of complex human themes through the medium of interpersonal violence and blowing $%#! up in space.” If you threw “and magical worlds” on the end, you’d have a pretty good starting description of what most of us Black Gate readers look for in a book.

That may sound a bit flippant, but in fact Page can be deeply thoughtful and historically informed about interpersonal violence. I confess, I’m biased in his favor. Page and I have corresponded off and on over the years, often through comment threads on BG. I’ve reviewed a couple of his books, historicals with a light sprinkling of fantasy elements, both of them great fun.

So when I saw the announcement that he had a new book available for preorder, I had to see it. Now you can find it here.

Which brings us to the cover copy:

Jason is a NetShooter champion. Now he must do it for real.

The teen coding nerd escapes hi-tech slavery only to end up on a gloomy jungle moon guarding an archaeological expedition, literally light years in the wrong direction from the comfortable new life he planned.

And it’s all the fault of crazy Uncle Max, the aging mercenary with second-hand combat systems and an antiquated ship held together by duct tape. To make matters worse, Max has the “brilliant” idea of telling the clients that Jason is a 500-year-old genetically modified super soldier!

Now Jason must protect his identity while tramping the mud, battling out-of-date firmware, and surviving the local wildlife. But can he really hide his age from the hot older girl with a thing for lonely immortals, or her jealous tech bro boyfriend? To rub salt into the wound, the local aliens are exhibitionistic sex maniacs. Also, soldiering hurts.

At least nobody is shooting at him.

Jason is an absolutely believable 18-year-old, set loose by his author to make the kinds of mistakes and seek the kinds of experiences an 18-year-old would — which means that if you’re considering this book for your teen reader, you might want to read it first, yourself. You’ll laugh at the satire of dystopian tech, cheer for unsinkable Uncle Max, and fret for the naive archeologists who don’t know, as we do, that those murderous space Nazis are lurking among the ruins.

You’ll also laugh at the tech-bro boyfriend’s secret AI wingman that’s coaching him toward all the ickiness of future pickup-artist culture. You’ll sympathize with Jason’s recognition that the digital entertainments that were his only introduction to mate attraction and mate selection have left him completely unprepared for interacting with real live women, in any capacity. There’s a thread of sex farce running through this coming-of-age story. It’s cleverly executed, genuinely funny, and in the end, especially the book’s equivalent of an after-the-credits Easter egg scene, respects the humanness of all the characters it touches, something you can’t always count on sex farce to do. 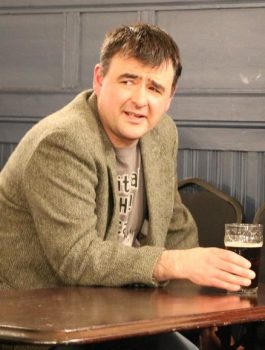 It did move me to email Page to make sure I understood who his intended audience was, because I had thought from his announcement that this would be a YA novel. He replied that it would be fair to describe Teenage Space Mercenary as “American Pie meets Firefly.” That sounds about right.

Ironically, the responsibility I feel as a reviewer to flag this novel’s “mature” content is more for the benefit of concerned adults than for curious teenage readers. In my opinion (which nobody is obligated to agree with), readers in their late teens, especially boys, might benefit from seeing a young man try to figure out worthy ways to interact romantically with young women — when the only thing he knows for sure is that the titillating examples he’s grown up with are wrong. The smarminess of that pickup-artist AI, and the fall-out-of-your-chair-laughing comeuppance it accidentally delivers to its user, add up to the kind of cautionary tale I’d actually want to put in the hands of my own teenage son.

I would add that the character who emerges most victorious from the story is the young woman Jason has a crush on. At various moments, the tropes we’ve seen in other pop culture lead us to worry that Dr. Clarissa Carmody might collapse into becoming a damsel in distress, a prize, a the apex of a YA love triangle, or any number of other things we’ve seen before. At the same time that I was wondering, along with the fun main plot, how Jason was going to fight his way out of the rising danger this time, the meta-level reader in me was wondering how M. Harold Page was going to accelerate beyond the gravity well of the tropes he was parodying this time. Never fear.

Jason’s a resourceful hero. His harrowing escape from the corporation that has kept him in a sort of code monkey labor camp for eight years reveals a young man who never accepted his captors’ efforts to define him. The promised interpersonal violence that attends his escape from indenture into an unwanted apprenticeship as a mercenary doesn’t define him, either, though he recognizes the dangers around him and commits to learning what Uncle Max has to teach. The fight scenes are a satisfying mix of freshly reinterpreted set pieces and truly original, truly weird encounters involving far-future tech and narrative interludes from the viewpoints of some very alien aliens.

When he has made his way through his ordeal with all its surprises, Jason has the biggest decisions of his life still ahead of him. If this book finds its people, we may see Jason in more adventures. I’ll be rooting for him.

Sarah Avery, winner of the 2015 Mythopoeic Fantasy Award for a book now out of print, was for many years a Black Gate regular, with columns on Teaching and Fantasy Literature and on Series Fantasy. You can find all those posts here. After years of having to settle for Twitter because of other time commitments, she’s making a return to long-form blogging at her new Patreon. Her short fiction has appeared in Beneath Ceaseless Skies, Space and Time, Fantasy Scroll, and Jim Baen’s Universe. Most of her short fiction backlist and an illustrated novella can be found at her Amazon Author Page.

Sounds a bit like a YA version of the first Murderbot novella, All Systems Red, especially with the main character being responsible for guarding some archeologists. I do not think that I need to say much more than that as a recommendation for reading it.