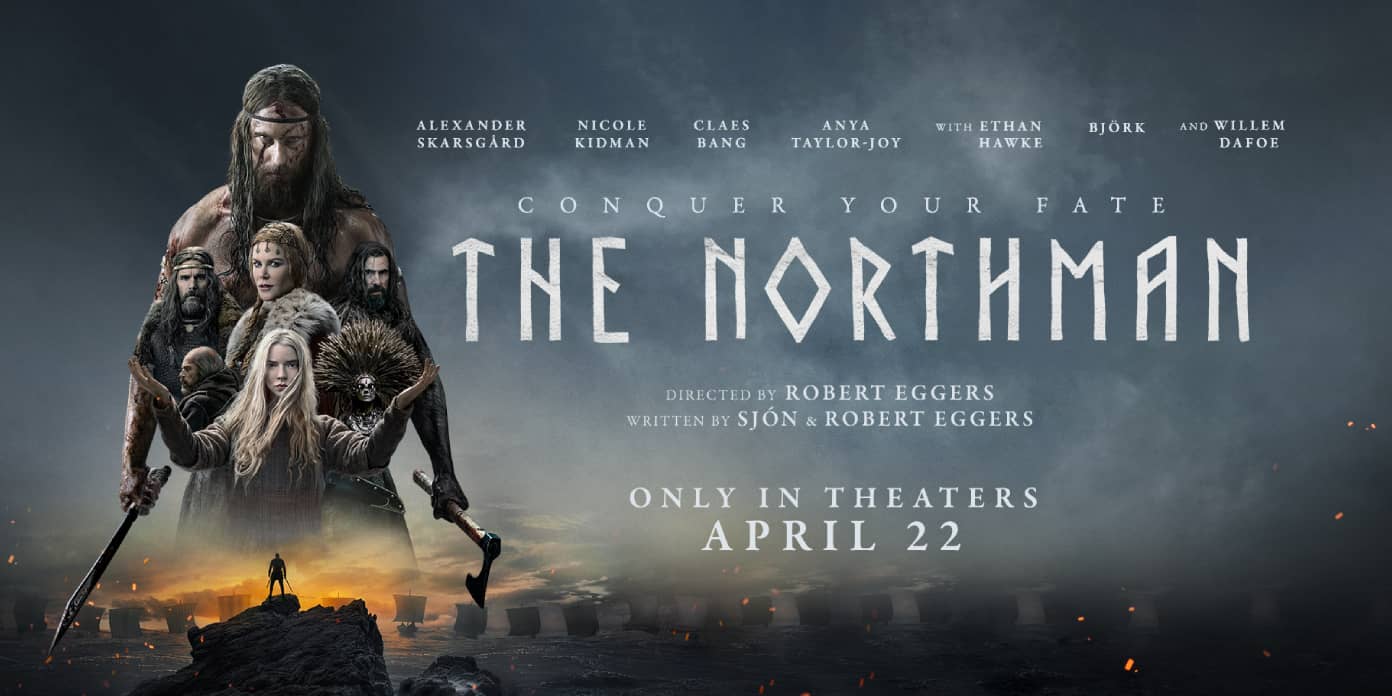 See The Northman if you can.

I went by myself. Mattie did not think it was what she needed just now. There are, I think, three other people in the theater. Price may have been an issue. I got in at a senior discount and it cost $12.09. I can prove I am a senior by remembering when kiddie matinees were 25 cents and regular movies were about a dollar.

In any case, it is superb for what it is. A grown-up Robert E. Howard movie, filled with hatred and vengeance and swordplay, but with real emotions and believable characters, as opposed to when we get in the typical cheapo sword & sorcery flick. (In which category I include the Schwarzenegger Conan movies.) It is of course heavily derived from Icelandic saga material, and also from the earlier, Danish version of the Hamlet story, which comes from Saxo Grammaticus. Prince Amleth, aged about ten, sees his father murdered by his uncle, then escapes, is thought dead, grows up to be a berserker, and is honor-bound to seek revenge. He makes dismaying discoveries about his mom. 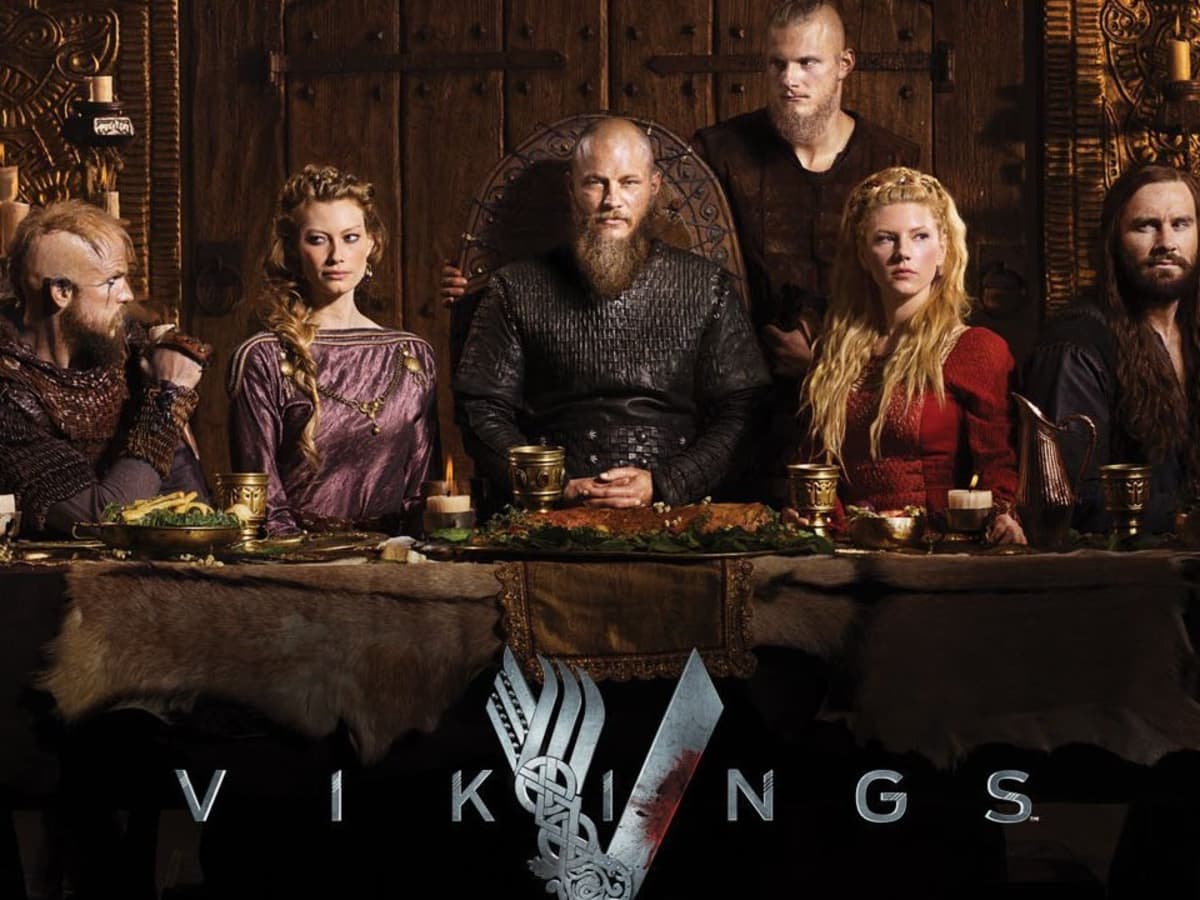 The History Channel’s The Vikings

The historical recreation is superb, avoiding the absurdities of the TV series Vikings, which featured punk hairdos and guys going into battle without their helmets. This is, as well as we can imaginatively reconstruct it, what medieval Iceland must have been like. (Pretty squalid, actually. But then it was a frontier society.)

There are fantasy elements, although most of them are visions or prophecies. When our hero goes into a narrow to high with a dead man for a magic sword, this is presented as actually happening, then as a kind of vision. The sword seems to have a magical property that it can only be drawn under the full moon. 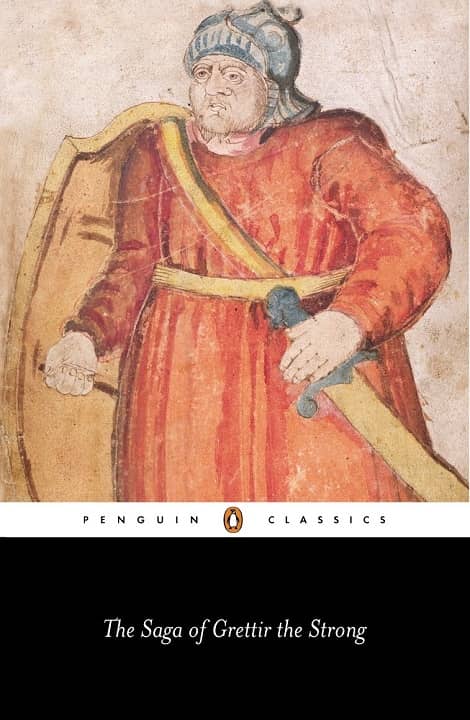 The Saga of Grettir the Strong (Penguin Classics, November 2005)

It occurred to me that for all I have read excerpts or otherwise briefly dipped into Viking Era literature, I had never actually read an Icelandic saga. I am now 82 pp. into The Saga Of Grettir The Strong, translated by G.A. Hight, Everyman’s Library circa 1913. It is hard to keep track of who’s who, with all the genealogies and people named Thor-something, but the story comes to life when it actually focuses on the title character.

The work is in three parts, first an account of the deeds of Grettir’s pagan ancestors, then his life, then the story of how he was avenged by a Christian half-brother. One gets the inevitable impression that Christianity, around the year 1000, was barely a veneer for these people, whose patterns of behavior had not changed at all since the old days, and whose chief occasions, other than a bit of farming, were homicide, arguing in court about the merits of same, and raiding and pillaging. 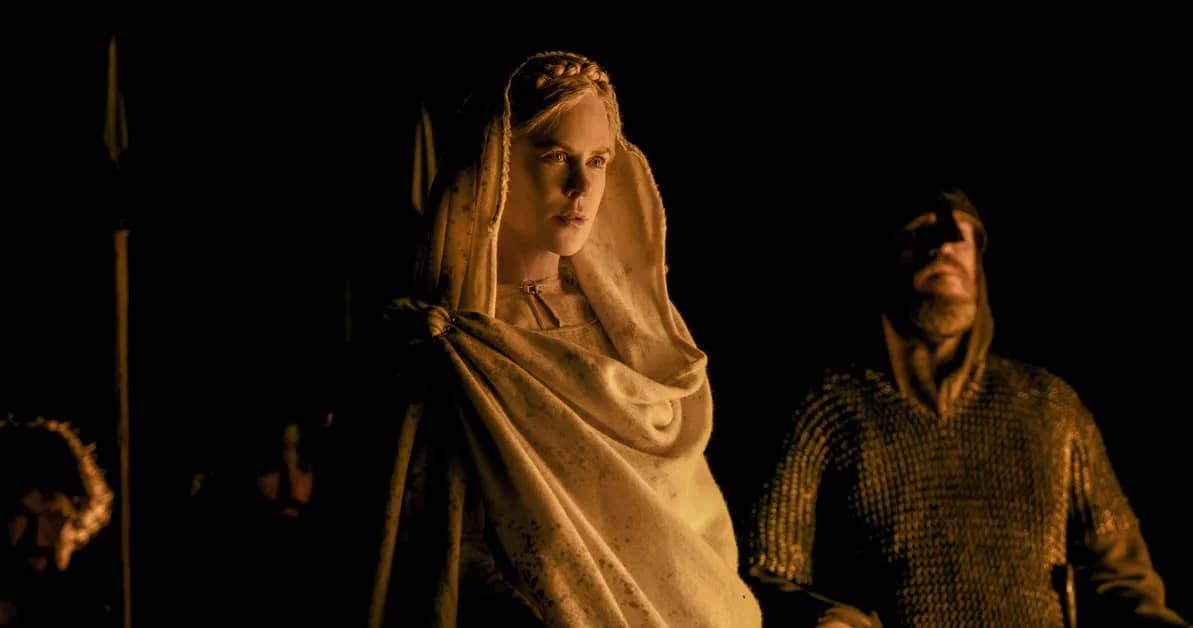 Nicole Kidman in The Northman

Grettir also encounters various spooks, complete with a sword-stealing scene that was replayed in the movie. Nordic ghosts seem to be more on the order of reanimated corpses. they are solid. One of the best ways to dispose of one (as we see in the film) was to chop off its head and lay it between the thighs. As this was supposed to be a work of history, we see that this was a world in which the supernatural was considered to be part of daily life.

The 19th century realistic novelist Frank Norris (author of MCTEAGUE) rewrote one of the supernatural episodes from this saga as “Grettir at Thorhall Stead,” which I read some years ago in Sam Moskowitz’s Horrors Unknown. Very vivid stuff.

Darrell Schweitzer’s last article for us was An Interview with D.G. Compton.

I’m not sure what to think about this one, short of actually seeing it, of course. Of Eggers’ previous movies, I thought The Witch was superb and I though The Lighthouse was a malodorous pile of offal.

The only thing about this movie that intrigues me to possibly see it is the director. I thought The Witch and The Lighthouse were both excellent (sorry TP). But the trailer looks like warmed over Vikings and Game of Thrones. I think Eggers missed that zeitgeist. Nevertheless, I’m sure I’ll still end up watching it once it streams.

My reaction against The Lighthouse was so strong that it makes me want to see it again for verification purposes; in retrospect it’s hard for me to believe that a movie can be as bad as I thought The Lighthouse was. Maybe it’s like hearing a joke and missing the one key word that made everything make sense. Or maybe I was right the first time!

I really liked the Northman . I go to matinees and usually only $5. $12.50 seems a bit steep. I liked The Lighthouse better than the Witch, although it looked good and was well acted. I liked the Lighthouse mainly for Willem Defoe’s performance.

I really liked ‘The Lighthouse’ – the setting, the decision to shoot it in black-and-white etc, plus there was a plot beneath all that arthouse posturing! Who’d have thunk it? The scene (real or imaginary) in which Pattinson discovers what at first appears to be a drowned woman will always stick in my mind. So while I haven’t seen ‘The Witch’, ‘The Lighthouse’ was enough to be persuade me that Eggers knows what he’s at.

Thanks for the review, Darren, btw. I misread one part of it – ‘I had never actually read an Icelandic saga. I am now 82’ – at which juncture, I thought: ‘Wow. This guy is even older than I thought!’

Another point worth noting: Eggers puts the lie to the contemporary directorial trend in portraying medieval material culture as this mish-mash of dark/gray/muddy, un-colorful, where everyone wears poet shirts, leather vests, and motorcycle boots. He cared about the research and accuracy of what he put on the screen, and it shows. So gratifying to see a director and costume designer care for a change!

The ghostly stuff in the GRETTIR SAGA is fascinating. The very solid “ghost” of the undead Glam likes to “ride” on the rooftops of houses, but also kills men and cattle. He is more powerful in the winter than in the summer, as if literally linked to the powers of darkness. Glam was a shepherd, who confronted an earlier “fiend” and apparently did enough damage to that spook that it was never seen again, but somehow he became such a fiend himself. It’s almost like the post-Romero zombie mythos. Grettir then must overcome Glam with sheet, Conan-esque strength. A Viking “ghostbuster” would use a spear or a sword, but mostly sheer muscle. Grettir, being the strongest man of his time, is up to the job.

First of all, I will be seeing this movie shortly, probably stream it a home. I’m a die-hard Viking fan, in both fiction and film. Secondly, thanks for drawing attention to the Norris yarn in Horrors Unknown. I have a copy on my shelf somewhere, so now I’m gonna dig it out and give Grettir at Thorhall Stead a read.