I didn’t discover Robert E. Howard through Conan. In fact, it was decades after I started reading fantasy before I read my first Conan story (“The Tower of the Elephant,” for the record.)

No, it was Howard’s rich fiction collections from Ace Books in the late 70s and early 80s that really introduced me to the master of 20th Century sword & sorcery. They were filled with enthralling tales of blood-stained history, dark adventure, and unexpected horror, like “Worms of the Earth,” “Pigeons From Hell,” and “The Gods of Bal-Sagoth.”

And those gorgeous Sanjulian covers!

The Gods of Bal-Sagoth, the first non-Conan work to be published by Ace Books since Almuric nearly a decade earlier, appeared in April 1979, and it was the start of what would become a lucrative and long-lasting relationship with Robert E. Howard’s broader catalog.

A diverse and eclectic collection, it contained the famous title novelette, plus a Cthulhu Mythos tale (“Usurp the Night”), the Kull short story “The Curse of the Golden Skull,” the early horror piece “The Shadow of the Beast,” a posthumous collaboration with Andrew J. Offutt that originally appeared in Swords Against Darkness, “Nekht Semerkeht,” and even an unpublished story, “The Isle of the Eons.” It also has a short Afterword by Glenn Lord, who curated most of Ace’s Howard collections, just as he’d previously done with Don Grant.

Ace eventually produced ten Howard non-Conan paperback collections between 1979-83, many of them reprints of Donald M. Grant’s original limited edition hardcovers. Taken together, they represent one of the finest libraries of Robert E. Howard’s short fiction from any publisher in the 20th Century, including the Cormac Mac Art collection Tigers of the Sea, the Bran Mak Morn title Worms of the Earth, the horror stories in Pigeons from Hell, the western tales of Heroes of Bear Creek, the historical adventures of The Sowers of the Thunder, the El Borak novella Three-Bladed Doom, and much more.

Here’s the rest of the set, in chronological order.

If you’re new to Robert E. Howard The Gods of Bal-Sagoth makes a good volume to start with. DMR Books publisher Dave Ritzlin hosts The DMR Blog, a great resource for anyone with the slightest interest in classic fantasy, and in 2020 he presented his choice for the Ten Greatest Sword-and-Sorcery Stories by Robert E. Howard, including the title story.

The heroes of “The Gods of Bal-Sagoth” are two renegades: Irishman Turlogh O’Brien, outlawed from his clan, and the Saxon Athelstane, who has thrown in with a group of Norse Vikings. The two have a history together, but they meet again when the Vikings attack a ship on which Turlogh is a passenger. The Saxon recognizes Turlogh in the stormy sea battle and takes him alive. Shortly thereafter the Vikings’ ship in blown off course and destroyed by a tempest. Athelstane is knocked unconscious, but Turlogh manages to save him. The two are the only survivors, and they wash up on a mysterious island (a classic sword and sorcery set-up!)…

Just before [their] duel is to begin, an unholy inhuman cry erupts from within the jungle. A scantily-clad blonde woman rushes into sight, pursued by a monstrous bird-like creature…

“The Gods of Bal-Sagoth” was ‘freely adapted’ by Roy Thomas as a Conan story for the 17th issue of Marvel’s Conan the Barbarian. 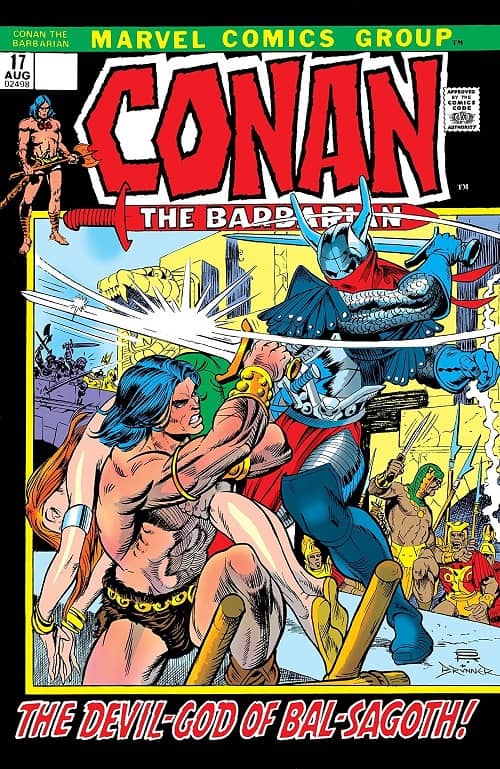 The Gods of Bal-Sagoth was published by Ace Books in April 1979. It is 235 pages, priced at $1.95 in paperback. The cover is by Sanjulian. It has never been reprinted, and there is no digital edition. Other than the Robert E. Howard Foundation Press limited edition Pictures in the Fire (2018, limited to 20 copies), it is the only English-language source of the story “The Isle of the Eons.”

When it comes to REH, I’m an amateur. He’s been extensively covered by numerous other writers here at BG.

But I hadn’t seen any recent articles about these marvelous old paperbacks, THE GODS OF BAL-SAGOTH, TIGERS OF THE SEA, and the rest, and I thought they deserved a few pixels. 🙂

Roy Thomas adapted The Gods of Bal Sagoth for issues 17 and 18 of Marvel’s Conan comic. They had rights to the character, but not the stories. Thomas was working with Glen Lord to get rights to some non-Conans, (here and there, as it were), and this was an early one.

Thanks Bob. I was curious how that came about!

I haven’t read the Marvel comics (1972 was just before my time as a Marvel reader), but I’d love to see them. I’m sure they’re in one of the Barry WIndsor Smith Conan reprints I’ve got…

Absolutely agree about the Sanjulian art on the covers, worth tracking down for those alone, never mind the quality of the stories. And alongside Mr. Lindberg, I’m also very much enjoying your recent focus on Sword and Sorcery inside the Black Gate…

Glad to hear it Bill! Sanjulian is a truly fabulous artist. Good to see he’s still working, even in his 80s. He’s done some recent covers for Goodman Games, including for the magazine TALES FROM THE MAGICIAN’S SKULL.

A great post! I discovered three of my favorite authors together with many other fine writers when, at a young age, I found a copy of The Macabre Reader. That old Ace introduced me to Clark Ashton Smith, H. P. Lovecraft, Robert E Howard, Donald Wandrei, etc. The REH story was The Cairn on the Headland. I had read Savage Sword of Conan at an even earlier age, but was so young I didn’t notice anything about REH. I didn’t read the actual REH Conan stories for years after reading the comics, at which point everything started making sense and coming together.

The Macabre Reader! I haven’t thought about that great old paperback in YEARS. It was published by Ace in the far-distant year of 1959 — even before my time — with a great Ed Emshwiller cover. I found a copy at a convention decades later. Thanks for the memories! 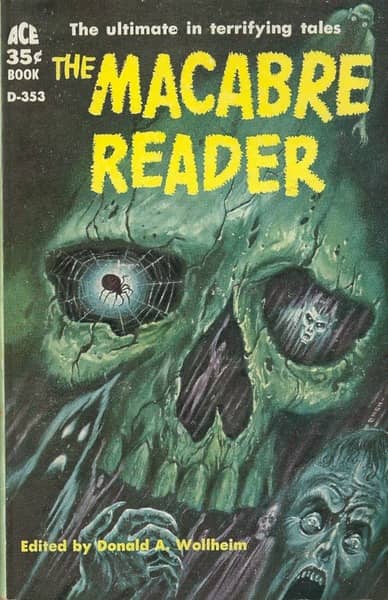