When you started the Tarot Sequence, did you have certain Major Arcana in mind for the protagonists? Why did you start with the ones that you did?

KD: The Sun Card was always the protagonist. Always. And I also knew the Tower would serve as the shadowy, powerful type. My biggest surprise was Death. I created Zurah with reader input about showing a better balance of races and ethnicities. And then I fell in love with her. She has many more scenes in Book 3. I could see her as close to Rune and his family as Lord Tower in the future… 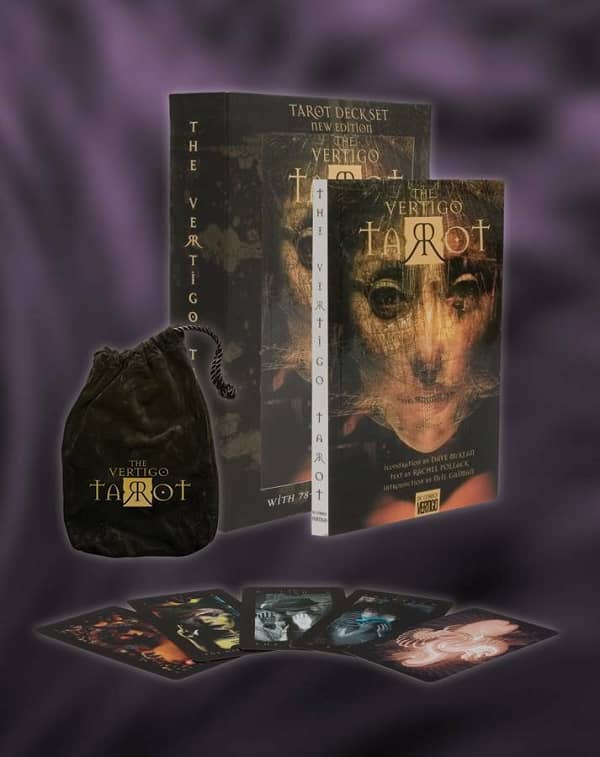 Do you have a favorite Tarot deck, and how has that influenced your depiction of the Arcanum (in look or in character?)

I do. For decades I exclusively used the Vertigo tarot deck. It was from the heyday of the adult DC imprint, when they were publishing essential editions of Sandman and Constantine. Characters from Neil Gaiman’s brilliance made it into the images, and he’s one of my major heroes from my 20s.

It’s a much darker deck, but the imagery is just gorgeous. If I’m in the mood for less brutal possibilities, I use Maggie Stiefvater’s Raven deck.

Talk a bit about your magic system, and how did it influence your New Atlantis in exile? Do you have a rule system that you are abiding by (and will we be seeing a future RPG or RPG supplement?) or is it more fluid, depending on the needs of the story?

I hope to one day have an open world tabletop role playing game [TTRPG} or RPG! I try to be very, very honest to the rules of writing I have. Especially with regards to sigil use. I find that it actually increases story immersion when you’re honest about that.

For instance, in Book 1, Rune was out of sigil spells and needed to find a sanctum while the mansion was under attack. Those ended up being some of my favorite scenes — and it was completely driven by the rules of magic I’d set up. I try very hard not to break those rules just for the sake of convenience.

Now that we know Time magic is possible, if verboten, will we be getting any peeks at the fall of Atlantis in future stories or books?

I’ll be honest: I’m not a big “prequel” lover. But never say never.

As for Atlantis itself? It’s still there, so I’d expect to see more of it in future stories….

Front and back covers for The Last Sun (Pyr, 2018). Cover by Micah Epstein

The Arcanum adopted Saint names at some point in the past. Other than delineating Arcanum lines, are the Saints chosen important?

Yes – I research saint names that had an affinity with the traditional nature of the major Arcana card. I talk a little more about why they used Saint names in Book 3 (The Hourglass Throne), too. It was when they began to have more business interests in the world (even before the Reveal). The saint names helped create a cover story for their presence outside Atlantis.

It’s also a throwback to my Catholicism. We freaking love our Saints.

Are there any Easter eggs in your work that are super important, but that your reader base hasn’t picked up on? Do you cackle to yourself in glee at what is coming in future works?

Yes. 🙂 Some of them I refuse to even breathe a hint of, for fear that the exceptionally insightful Discord crowd will hunt the secret down.

How much have your readers influenced the future direction of The Tarot Sequence?

Oh abso-freaking-lutely. It’s not an exaggeration to say that readers have saved the lives of characters.

I pay close attention to readers and what they say, including written reviews. They let me know when characters are working well, and where I need improvement. There are some elements of the story that simply won’t change from my original perspective, but I also try to keep the outline flexible.

Kellum Greenwater is a good example of that. His tiny scene in Book 2 got so many positive comments that I brought him back for a short story, and have plans to bring him back into the series in the future.

Have you plotted out any future novellas and short stories, and can you share any tidbits of what your readers can look forward to?

…I can’t. There are two novella ideas I have that are Highly Secret. (There’s also a third novella in the works — The Eidolon – but that’s an official expansion to the third book, more like a main novel than a side story.)

But there is one secret revealed near the start of Book 3 that is just begging to be retold as a novella. I don’t often write “prequel” stories, but I do want to write that one, even though I’ll need to do at least nine months of research before I’m even READY to try. 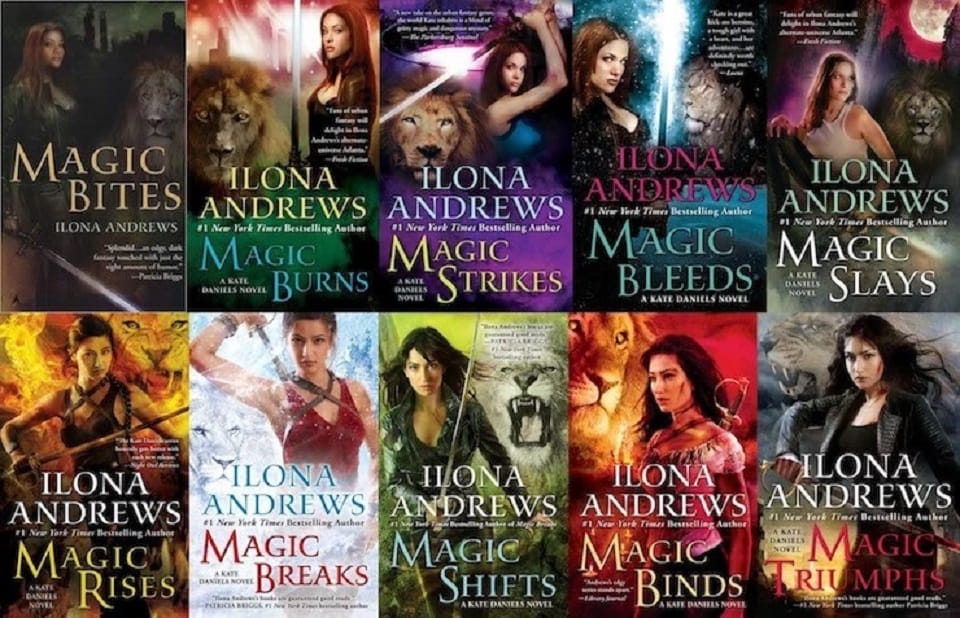 Are there any other authors that you would consider to be formative influences for your writing?

Neil Gaiman. I learned about him in my 20s, and his influence on my world-building was massive. To this day, I still put a very brief homage to one of his Sandman characters in each book or story.

I also adored what Ilona Andrews did with the Kate Daniels series – it was massive, deep, complicated world-building, and you got thrown right in the middle of it from the first page.

There were many other authors who were important to me in my youth, but my relationship with those authors is more fraught. Many of them simply didn’t age well, and elements of the stories, through the perspective of my 50-year-old self, are highly problematic.

Front and back covers for The Hanged Man (Pyr, 2019). Cover by Micah Epstein

For fans of your work, what other authors and their works would you recommend? For contemporary authors, and for authors of the past?

I’ll be honest, though – for the most part, when the pandemic hit, I switched from reading books to watching international TV. I don’t regret it, because it opened my eyes to so many more global styles; but I really need to get back into a strong reading routine. 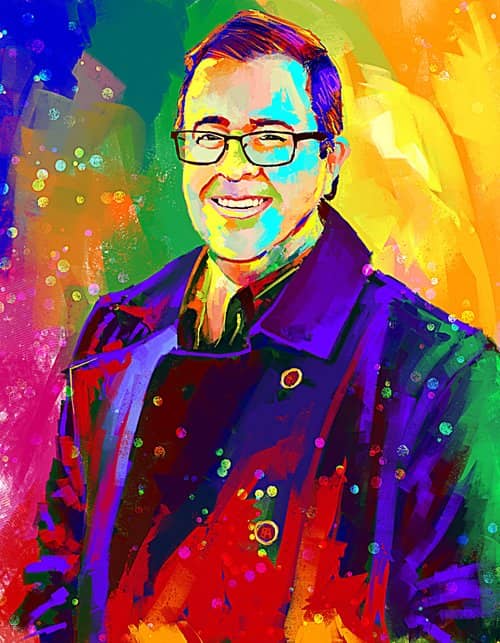 K.D. lives and writes in North Carolina but has spent time in Massachusetts, Maine, Colorado, New Hampshire, Montana, and Washington. (Common theme until NC: Snow. So, so much snow.)

The first book in his urban fantasy series The Tarot Sequence, called The Last Sun was published by Pyr in June 2018. The third installment, The Hourglass Throne, is expected May 17, 2022.

Want a synopsis of The Hourglass Throne?

As Rune Saint John grapples with the challenges of assuming the Sun Throne, a powerful barrier appears around New Atlantis’s famed rejuvenation center. But who could have created such formidable magic…what do they want from the immortality clinic…and what remains of the dozens trapped inside?

Though Rune and his lifelong bodyguard Brand are tasked with investigating the mysterious barrier, Rune is also busy settling into his new life at court. Claiming his father’s throne has irrevocably thrown him into the precarious world of political deception, and he must secure relationships with newfound allies in time to keep his growing found family safe. His relationship with his lover, Addam Saint Nicholas, raises additional political complications they must navigate. But he and Brand soon discover that the power behind the barrier holds a much more insidious, far-reaching threat to his family, to his people, and to the world.

Now, the rulers of New Atlantis must confront an enemy both new and ancient as the flow of time itself is drawn into the conflict. And as Rune finds himself inexorably drawn back to the fall of his father’s court and his own torture at the hands of masked conspirators, the secrets that he has long guarded will be dragged into the light—changing the Sun Throne, and New Atlantis, forever.

The climax of the first trilogy in the nine-book The Tarot Sequence, The Hourglass Throne delivers epic urban fantasy that blends humor, fast-paced action, and political intrigue.

Purchase The Hourglass Throne at your favorite retailer or e-tailer.  Direct links for some popular ones: