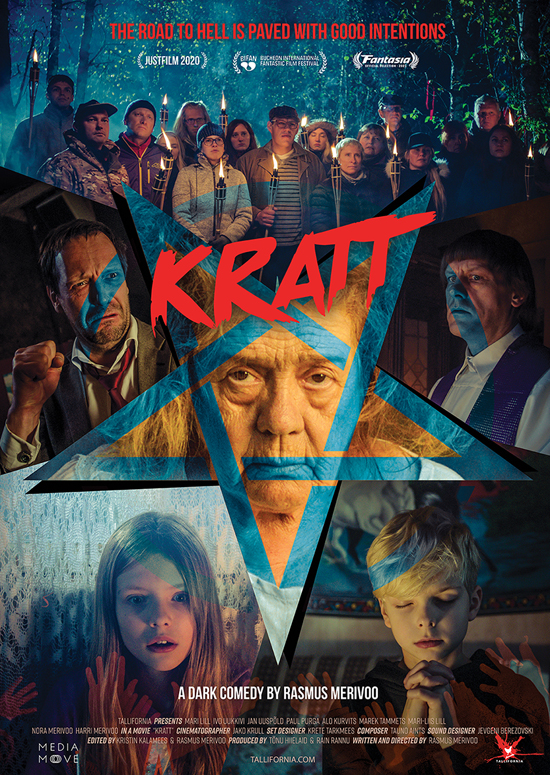 “Cuckoo!” is a 7-minute short film from the Netherlands directed by Jörgen Scholtens, who co-wrote with Jörgen Van Weeren. It’s a surreal piece about a tiny man (Frank Lammers) who lives in a cuckoo clock with his even tinier cat. He’s responsible for popping out on the hour, but one day things go wrong and lead to a cascade failure. It’s an absurd piece about routine, and it has a good production design involving old technologies. It’s a bittersweet story that works.

With it was bundled Kratt, an Estonian feature written and directed by Rasmus Merivoo. In 2017 I loved November, a film about the superstitions of a small Estonian village in the 18th century; one of those superstitions was the Kratt, a monstrous servant you could get the Devil to bring to life to do your will. The Kratt needs to always be doing work, or it’ll turn violently against its masters. To be clear, this film is nothing like November, which was a downbeat arthouse fantasy; this Kratt is an oddball comedy-satire, mixing straight-faced gags with moments of outright gore. Still, I was interested in seeing another spin on the Kratt story, not least because of the different tone this movie promised.

Kratt takes place in the present day, when a couple of young kids, Mia and Kevin (Nora and Harri Merivoo, the director’s real-life children) are left with their grandmother (Mari Lill) in a small village somewhere in Estonia. The kids are unimpressed with farm life, and when they find out about the legend of the Kratt they think they have a solution. Things, of course, go wrong. Their quest to build the Kratt and the consequences of their actions unfold against the background of village life and its controversies, which include protestors trying to prevent deforestation and a middle-aged politician (Ivo Uukkivi) caught up in corruption and playing both sides.

It’s a funny movie, and self-consciously aims at a broad humour that mostly works. There are odd moments and touches in the comedy, though, notably including the sub-plot about the corrupt governor, whose character goes through a real metaphysical struggle. And especially including surreal moments toward the end of the film, as foreign governments get interested in the Kratt and its applications in the field of AI research.

The tonal shifts in the film make it a little hard to see a natural audience for it. If I said this was a movie about a group of children who through a certain amount of ingenuity are able to briefly live the high life before their plans threaten to ruin everything, you might well think it’s a kids’ movie. And that kids’ movie is in here somewhere, or at least 90 percent of it. But also there are some scenes with gore and disquieting violence. And then those scenes with a depressed middle-aged politician who wonders if he can really make a difference in the world — nothing disquieting, but scenes with an emotional tone that’s not really native to childhood.

There’s an interesting interview with Merivoo, though, where he talks about Kratt as a children’s movie. His argument’s that children are exposed to gore to a greater extent today than in the past, which is true. And it’s also true that many children’s films have dark and disturbing elements in them. I am not sure how many other kids’ movies have men chopped up to be made into pizza, which is discovered when one unlucky soul eats said pizza. Some kids will enjoy that sort of thing, of course, but I still suspect it’d be a good idea for adults to be sure about who they show this to.

The flip side of the violence, though, is that the folkloric menace of the Kratt is established very well. One of the points of the Kratt story is that the demon servant has to be constantly given work or else they’ll turn on their master, and since the Kratt’s bestowed by Satan that won’t end well. Another point is that the Kratt does literally what you tell it to, so again the odds are that sooner or later the master will give the thing a sloppily-worded command and end up regretting it. This sort of thing’s reflected well in the movie, and the folkloric tropes align well with knockabout comedy.

The idea of a servant that understands its orders but carries them out literally has an echo beyond folklore: it’s also the fear some futurists have of artificial intelligence, that an unwary command could end up having disastrous consequences. I note that in Estonia Kratts are a common metaphor for AIs, even referred to as such in the country’s legislation and government documents. That’s reflected in some late plot developments here, but I was a little surprised to see that media-savvy kids didn’t use the similarity; one thinks of the old Star Trek episodes where a computer’s distracted by, say, being made to work out the final digit of pi. Kratts are traditionally just told to make a ladder out of bread, which sounds disturbingly possible to me.

In any case, it’s a similarity that sets up the thematic backbone of the film, the conflict of old and new. The kids and their grandmother baffle each other; watching them on their phones the grandmother observes “it’s like they’re under a spell,” and that parallel of the modern and the traditional gives their clash an interesting spin. You see the kids working out how to cast a Latin spell without the help of Google Translate, while Satan’s equated to eBay: he exchanges goods (the Kratt) for a very specific currency. 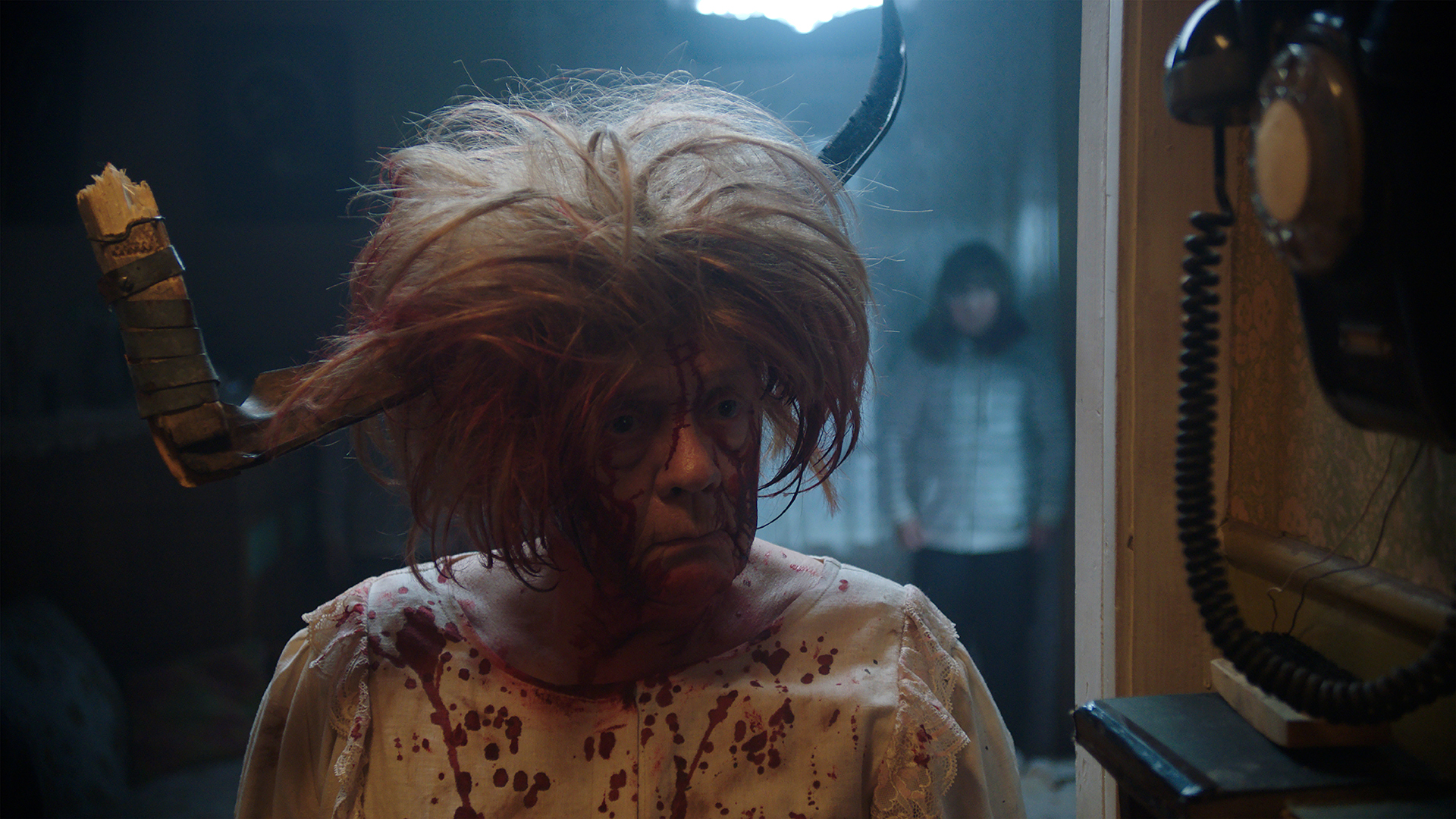 This plays out effectively because the village and its inhabitants are sketched in effectively. We see the locals relating to each other, we see the local controversies, we see people reacting to each other and to their environment. But also we find there’s a history here with the Kratt, involving the governor’s mansion and extending back to the 19th century. The setting and background is brought to life, and that helps sell the film overall.

Kratt is still a very odd film. It’s far from a bad movie, but it’s a movie that hares off in odd directions at unexpected times, chasing unexpected subplots. In some ways that makes it more interesting than a perfectly-machined tale that focusses on one or two main characters. But then there are some ways in which you wonder if the story’s been entirely thought through. I incline toward finding the individuality of the film one of its real graces. It’s a fascinating watch, often funny, and certainly unpredictable. Which sounds like it should be enough.