The Villeneuve Dune is breathtaking. I was literally having trouble breathing during the closing scenes. While I watched, I kept mulling over why this version works so well and Lynch’s fails so badly. Lynch is a genius; he had a strong cast; he had enormous financial resources to deploy.

Villeneuve might just be more in touch with this kind of story. (Despite the POV drifting in and out of consensus reality, Dune is not Eraserhead.) But a more important factor is time.

Lynch’s Dune was 137 minutes long in its theatrical cut. Villeneuve’s Dune is nearly 20 minutes longer and it only takes the audience near (but not quite all the way) to the end of the novel’s Book One, covering less than half the story. The completed version could easily run to more than 6 hours. Lynch simply wouldn’t have been allowed to create a movie that massive in the mid-80s. 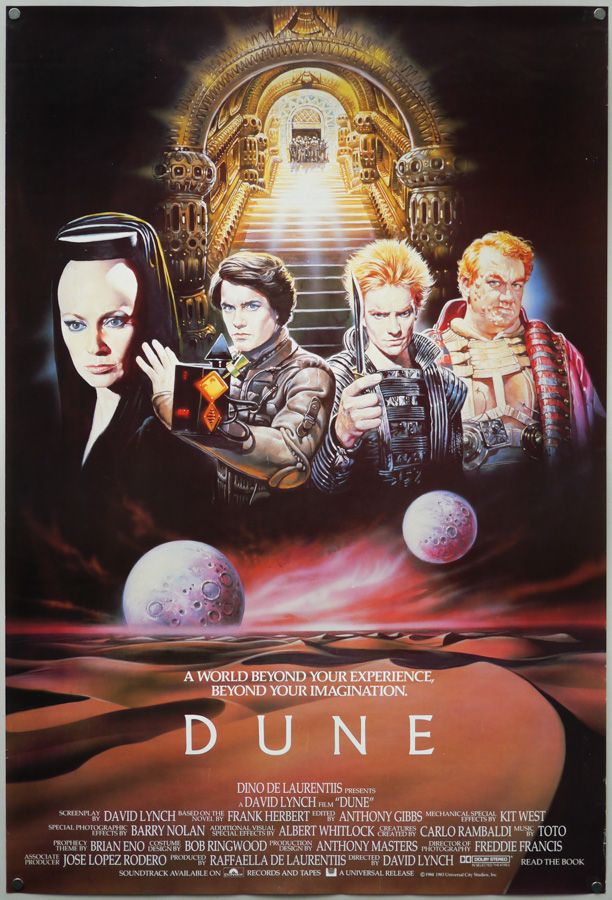 All that time creates space: space for Villeneuve to sketch in the essential details of story, character, and exposition so that the beats of the plot can drop with the appropriate impact. (Even so, things seem a little rushed at times, and I wouldn’t be surprised if Villeneuve shot a lot more usable scenes than could actually be used.)

This movie is not a slavish adaptation of the novel, and that’s exactly why it works. So much of the novel takes place in people’s heads. If the filmmaker is not to use a corny voiceover to suggest the characters’ inner monologues (and he doesn’t), he’s got to find a way to represent those inner struggles cinematically. Villeneuve does this brilliantly. I ache to give at least one specific example of this general observation, but since the movie was just released yesterday, I’ll refrain. 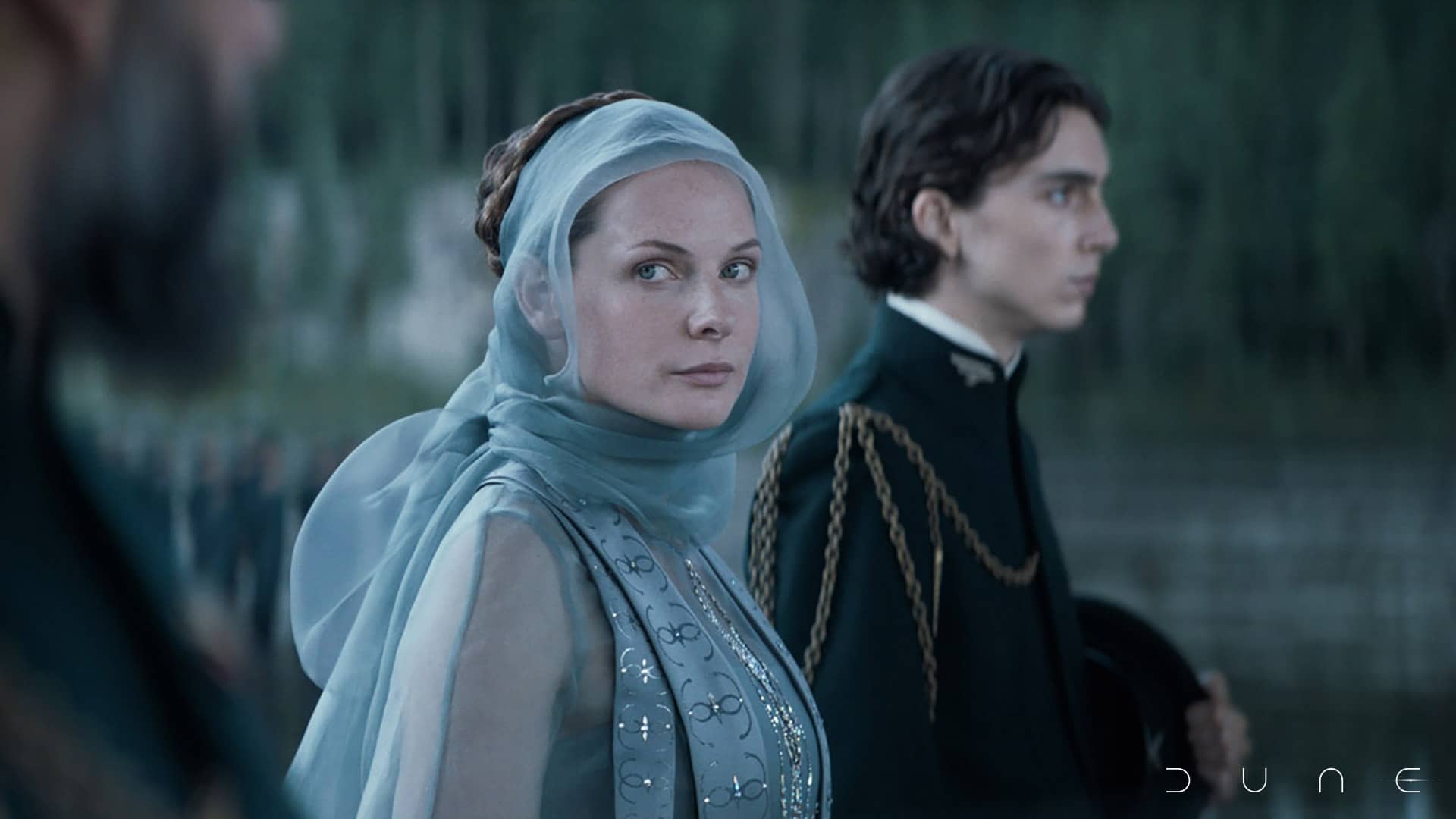 Some people hate Dune’s sandy guts. This movie won’t change their minds. But it’s a movie you could enjoy without reading the book, and it’s a movie that readers of the book will almost certainly enjoy.

It’s a relatively trivial detail compared to the story, but the spaceships in this movie are amazing. It’s the most glorious depiction of space travel since 2001.

I never read the book or saw the first movie, but I knew the premise –being as old as I am. Anyway, this movie was very accessible and engaging. Loved it and can’t wait for part II. The Hans Zimmer soundtrack rocked. Loved all the dragonfly ships, sandworms, cool energy armor effects….acting and story arc were spot on too. It’s interesting how much topical things are played in an entertaining way; it is not heavy-handed about politics at all…. but it clearly echoes (a) climate change/environmental issues and (b) religious zealotry. That is scifi bread and butter.

i will watchy aything this guy does, love his style and he didnt fuck up blade runner, so i am loyal… till i’m not

my only gripe is, i feel like they only slipped in the fact it was part 1 in the last couple months and the ending was not satisfying at all. other then that, i missed the pilot group whatever they are called, but otherwise liked it enough. no where near my favorite sci-fi, but also was never a favorite in sci-fi books either. just a solid story though.

Yeah, good movie. But no guarantee that it will ever be finished. Like the GoT books, why invest any time in the movie version knowing Part 2 might never happen? Seems to happen a lot these days.

I absolutely loved Dune. And I highly recommend seeing it in an IMAX theater if you’re able to do so.

I had the complete opposite impression. Of the two films, it seems clear to me that Lynch’s film is the better adaptation and the more interesting film, even though it has a lot of well known issues. I just found the new version to be dull, bland, and lazy. Too bland and forgettable to hate though, so there’s that.

The entire film’s design screams lack of ambition and timid artistry. Where are the colors, the textures, the interesting shapes? Are these not the most powerful noble families of this far-future feudal society — over 10000 years into the future supposedly? Why the dour styles? Why were the stillsuits clearly assembled from bits of motorbike gear? Why is it that, on a purely graphic level, the TV adaptation of Foundation is more fun and interesting to look at than this 165 million+ quasi-monochrome flick?
The issue rests squarely with Villeneuve, of course, who in the course of three Fantasy films, has proved that he is out of his depths when it comes to visualizing and giving weight to fantastical worlds – not everyone is a Scott, or a Lynch, or a Lucas for that matter. He will invariably opt for the least ambitious, most derivative, expected approach: the simplest of lines and textures, and the dimmest of colors (when there’s any at all). He’s the film-making equivalent of the persons who think they’re stylish and/or who claim they are interested in design, but who will invariably wear black and grey no matter what and no matter where. What a disaster that this man got to re-make Dune.

The rest of the film is the same: dour and dull, when the film-making doesn’t become vulgar and obvious.

A few of my personal favorite failings:

The film has really poor dialogue. It can be expository in the crudest way, with the scene between the Duke and his son chatting in the middle of their ancestors’ graveyard (no better place for ancestral graves than a cliff’s edge, eh?) being the worst example of this unfortunate tendency. Or the dialogue is used in a throw away manner, by film-makers who have zero interest in using it help us understand the world and the characters better: how about this moment, when after donning their stillsuits in the deep desert, the young Duke asks his mother, Lady Jessica, “R’you good?” Can we even imagine the son of, say, the Emperor of Japan asking his grieving imperial mother after some hair-raising event: “R’you good?” Same when the evil what-a-bad-bad-man-oh-he’s-so-evil Baron says, talking about Arrakis, “my Dune”. Who speaks like that, but a child … or an adult in a dumb-ed-down Hollywood film made by corporate film-makers obsessed with the idea of removing every single morsel of whimsy, uncertainly, and personality from their machine-like films?

Why milk unimportant scenes and cut the ones that could have helped us feel something about any of these characters? Why spend so much time on the unimportant plane crash in the desert, for instance, and not see or hear more about the Fu-Manchu-like (real bad this) Dr. Huey’s motivations for killing the Duke, his friend!? Isn’t the Duke’s death the most pivotal moment in the film? Similarly, it may have been a good idea to see the Duke and his wife in love, no?, instead of seeing those shots of Shani in the desert, with Paul reminding us that he’s having visions of this girl, in case we didn’t get it the third time around.
And how about the sublte-as-a-brick-I’ll-crush-all-thought music (reminded me of the soundtrack for Prince of Persia, with that embarrassing world-music orientalist choir) and the vulgar use the filmmakers make of it throughout the film, in a futile attempt to elicit some emotion in their “pump that volume up to let these idiots know this moment is important/scary/sad” audience?
And we even have a bagpipe, 10 000 years into the future, on some alien world. Thanks for the burst of laughter, Dennis, which had the unintended effect of deflating that arrival scene’s self-righteous pomp completely.

Yet, hear ye, hear ye! It’s not all bad. The “There’s no need to fight over me, gents”-scene is cool – tickled my power-fantasying adolescent-self the right way.

I’m dreading the thought that there’s another one just like it on the way. And a TV show about the space witches too! Maybe this time we’ll get to see Charlotte Rampling act without having to hide her glorious face and eyes behind a thick net though.