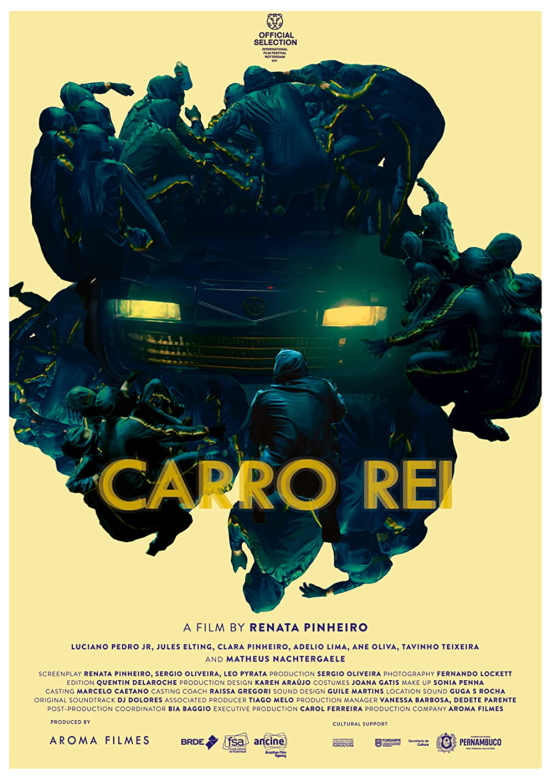 King Car (Carro Rei) is a peculiar and beguiling piece of science-fictional magical realism from Brazil’s Renata Pinheiro, who directed and co-wrote with Sérgio Oliveira and Leo Pyrata. The least that can be said is that the film certainly has a distinctive voice. It’s not filled with splashy special effects, but it manages to tell a large-scale story with an inventive structure and a daring approach.

It follows Uno (Luciano Pedro Jr.), the son of a taxi magnate who turns against the supremacy of the car in order to study ecological agriculture. And yet when a new law promises to ban cars more than 15 years old, Uno and his eccentric mechanic uncle Zé (Matheus Nachtergaele) upgrade old cars into a new fleet of sentient automobiles of the future. For Uno has the ability to speak to cars, and to one car in particular. This car, King Car, becomes the prototype of the new fleet despite the misgivings of Uno’s friends. But when things spiral out of control and a disturbing popular movement forms, who else can Uno turn to for help in setting things right?

The basic idea of this film sounds familiar: like Knight Rider, like the Love Bug movies. The idea of old cars being banned maybe sounds a little like Richard S. Foster’s story “A Nice Morning Drive” (or its prog-rock adaptation, Red Barchetta). And the basic idea of young activist students taking on a dystopic power structure — which develops as the movie goes on — is familiar from any number of narratives. But in fact King Car isn’t like any of these earlier tales. It’s not much like any other story, for better or worse or both.

There are a lot of different ideas in this film, a lot of narrative elements — I didn’t mention Zé’s performance-artist girlfriend (Jules Elting), for example, whose art is directly about challenging patriarchal power structures (by using a specially-made set of panties to stamp statues of dictators with the word ‘dead’). And a lot of thematic material, ranging from the contrast of nature and technology, to how machines and sexuality combine, to the nature of mass political movements, and even including the evolution of humanity. You might expect it to be a bit scrambly.

In fact this a movie whose pieces, in addition to being odd in themselves, fit together in odd configurations. Information is doled out at surprising times in surprising ways. And all those themes develop in directions you don’t expect. It’s hard to keep track of everything that’s going on in this film; some plot strands and ideas get lost for long stretches. And there’s a staccato rhythm to the film overall. There are sequences that feel as though they’re aiming at a kind of Tarkovsky-like slow cinema, but then again the movie’s also not afraid of quick dialogue. There will be sequences that seem almost plotless, and then it will turn out that many things have happened very quickly.

There is I think a valid argument that the film’s trying to fit two or three different plots into one. But then that’s part of what makes it fascinating: seeing the way different elements bounce off each other. A story about a populist political movement challenged by plucky teens gains in individuality when the strongman populist leader is a sentient car. A story about a sentient car and the youth who communicates with it takes a weird new shape when the car has sex with the kid’s uncle’s girlfriend. And so on.

The car is central to most of the plots, and so is one of the most important characters in the film. It speaks to Pinheiro’s visual sense that she’s able to give King Car an individual character without giving him any human shape. The car does get a voice, but none of the usual visual signifiers of the human — eyes, a mouth that can frown or smile, gesturing hands, and so forth. King Car as a character has not just depth but ambiguity, now an ally to Uno, now a tyrant in waiting. The movie needs the car to be able to sustain a central narrative role, and King Car does that.

Meanwhile, uncle Zé proceeds along an opposite trajectory, devolving as the film goes along. Matheus Nachtergaele’s primal performance is one of the highlights of the film, and he makes Zé both sympathetic at the start and something very different by the end. If the movie often recalls dystopian YA fiction, one of the more intriguingly YA aspects is the way the young characters have to work out who to trust. And with that, particularly for Uno, a question of which loyalties and which ideals to follow. That’s the stuff of good drama, and carries King Car.

Notwithstanding which, the film’s primary concern doesn’t seem to be the drama. I came away from the movie thinking it was more interested in moments; and the odd rhythm of its storytelling makes sense if you think of the movie as being about specific scenes or even montages within the overall saga of Uno and the intelligent car. The movie has a centrifugal pressure constantly at work, all those moments and scenes pulling away from the narrative spine of the movie. The scenes that are most startling and powerful are not usually the scenes that move the drama and characters forward.

This means that the character arcs take on an odd shape. Mostly they still work, as Uno’s relationship with the girl he has a crush on and the activists he allies with are clear and even familiar — we’re so used to the shape of this story the movie only has to nod towards it for us to see what’s happening. I do feel that Uno’s relationship to his father was inconsistently explored; generally the father’s overshadowed by Zé, who functions like a more sympathetic if ambiguous father-figure. There’s an overabundance of male role models for Uno, then, and his situation between them is underexplored.

Overall, though, I liked this movie, if with reservations. It’s a film about activism, which (according to a question-and-answer with the filmmakers) speaks especially to the current situation in Brazil. But it also has a lot more to say about humanity and technology and patriarchy and maturity. It’s a scattershot film, but that adds to the surreal magic-realist tone. It’s not going to be for everyone, but for people people who enjoy that oddity, and especially for people who want to see a remixed dystopian story about direct social activism, it’s worth watching.