In the mid-70s A.E. van Vogt was one of the most prolific and respected SF authors on the shelves. His books Slan, The Voyage of the Space Beagle, and The World of Null-A were required reading for any serious science fiction fan, and half a dozen publishers — including DAW, Ace, Berkley and Pocket Books — were competing to keep his large and lucrative back catalog in print.

Today he’s essentially forgotten. And unlike a lot of popular authors of the era — Heinlein, Asimov, Philip K. Dick, just as a few examples — there isn’t a highly visible group of fans fighting to keep his memory alive, or bring his most popular work to the attention of Hollywood. Van Vogt first emerged in the pulps, and he mastered the art of writing for a pulp audience. Of the writers I still read read today, his voice most vividly reminds me of the pulp era of science fiction, with all its strengths and weaknesses — including, unfortunately, a simple and unadorned writing style that’s largely unappealing to modern readers.

There aren’t a lot of Van Vogt books I would recommend to a curious modern reader. I tried to reread Slan a few years ago, a book that mesmerized me when I first encountered it in 1977, and I found that to my adult eyes it read very much like a middle grade chapter book.

That doesn’t mean that there aren’t still Van Vogt titles that interest me, and stubbornly refuse to leave my TBR pile. Tops on that list at the moment is Supermind, a 1977 fix-up novel composed of three acclaimed novellas originally published between 1942-68, all dealing with humanity’s struggle against a sinister race of alien vampires:

Prospero’s Isle currently has my favorite one-sentence review of the retro-Hugo nominee “Asylum”:

In “Asylum” we followed the adventures of an (apparently) average-Joe kind of space pilot, Steve Hanardy, who gets inadvertently tangled up in the battle between a galactic observers who are trying to protect mankind and the solar system from deadly, and superiorly-intelligent, vampire-like aliens, the Dreeghs, from overrunning the solar system and destroying mankind. 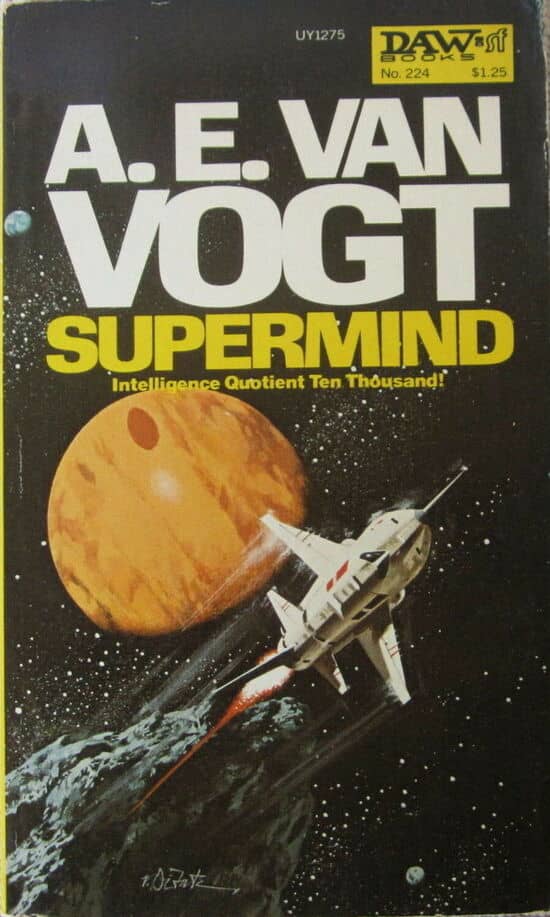 Wikipedia has a handy (though spoiler-filled) summary of all three tales. Here’s the start of the summary for “Research Alpha.”

The third section takes place at Research Alpha, where one of the researchers is experimenting with a serum to rewrite human genetic code to create superminds. It follows a secretary as she undergoes two treatments, eventually reaching IQ 10,000….

Supermind has a 3.53 rating at Goodreads; here’s an excerpt from Brian Schwartz’s 3-star rating, focusing on “Research Alpha”:

RESEARCH ALPHA – even in this fix up book – is a great stand alone story and reveals what a great teller of short stories A.E. Van Vogt was. The characters are interesting and complex. In most stories of this sort, we see illustrated the old maxim of how absolute power corrupts absolutely. In the case of the young typist, it does corrupt her to some degree because she enjoys her omniscience. However, she retains her essential humanity and makes conscious decisions not to harm anyone.

Most of the modern critiques I’ve read of Supermind complain about the way the stories were rewritten to shoehorn them into a single coherent narrative. I can’t comment without having read the original tales on how accurate that is, but it’s probably a valid critique.

Supermind was published in paperback by DAW Books in January 1977. It is 176 pages in paperback, priced at $1.25. The cover was by Vincent Di Fate. It was republished many times by DAW, including a 1979 reprint with a new cover by Attila Hejja. An ebook version was released in 2015 by Agency Editions.

I read ‘Slaughterhouse 5’ years ago and as a result have fond memories of Kurt Vonnegut, but started ‘The Sirens of Titan’ last year and never finished it.

In fairness to both him and Heinlein, I think the problem may be genre-specific as well. Science Fiction is about possible futures. As a result it tends to age badly. The more topical, the more quickly it starts to look like old-hat – e.g. reading ‘Neuromancer’ a few years ago was a pretty weird experience for me. I found it difficult to buy into Gibson’s world because it was such an odd mix of the futuristic and the anachronistic. Somebody could jack into the Net, but there were still phone boxes everywhere.

Compare this with fantasy. Good fantasy will improve with age because it’s already backward-looking: the fact that it’s often very much of its time works to its advantage – ie, it adds an extra patina of age to something that’s already trying to look old

OTOH, Fantasy is so much more formulaic. 99% of it can be summed up as “there is a war in some ancient or medieval world”, while SF can take place anywhere, any time. Open a random Fantasy book and chances are you will not be surprised, while anything can happen in a SF book.

For sure – I think that’s going to be a problem as long as people keep producing endless iterations of LOTR (which has had a largely negative influence on the evolution of American fantasy, imo) – but I was thinking more of how a good fantasy work will age better than a good SF work. It would be interesting, say, to compare Poul Anderson’s ‘The Broken Sword’ with his SF work to see which has aged better. I’ve actually only ever read ‘The Broken Sword’, so have no idea (although I’m guess this is telling in itself).

“It would be interesting, say, to compare Poul Anderson’s ‘The Broken Sword’ with his SF work to see which has aged better.”

Funny you should mention that, since I’ve read four if his old novels in the last 2.5 years, and I rated them thus on a score from 0-5:
Three Hearts and Three Lions: 3.5
Brain Wave: 3
The Broken Sword: 4
The High Crusade: 2.5
So the two Fantasy books score higher.

OTOH I rated another book you mentioned – The Sirens of Titan – 4.5. I thought it was very witty and clever, and a definite influence on Douglas Adams. I liked it better than Slaughterhouse 5, and to me it didn’t feel aged. But then I’m in a retro mode, so it’s hard to be entirely objective.

That’s interesting, Knut – maybe I should give ‘Sirens of Titan’ another go?

The fact is, a lot of work of this vintage – even by much more well-regarded writers – creaks quite a bit. I just finished Asimov’s Foundation and Foundation and Empire, neither of which I have ever read before, and I’m appalled at how bad they are, a badness that’s a function of mostly being cobbled together from stories written before the work’s overall structure was conceived, and of the young Asimov’s godawful clumsiness as a prose writer. It’s impossible to believe that the trilogy would still be read today on its own merits if it hadn’t been anointed as sf’s greatest series in a long-ago poll. (Myself, if I have to have an old-time sf saga to warm my nights, give me the Lensman books over the Foundation Trilogy any day. I can’t tell you with what dread I’m approaching Second Foundation.)

And yet Apple is sinking zillions into a huge prestige television production of Foundation and Van Vogt is, as John says, almost forgotten. I’m sure some Hari Seldon of psycholiteraryhistory could have predicted the survival of some writers and the extinction of others, but it’s often a head-scratcher to me.

Yeah, Foundation is rather overrated.
I read the whole series for the first time right after reading A Song of Ice and Fire, and the older books were rather crude in comparison. The newer books were quite different in tone, which was quite jarring (but then there was about 40 years between the older and newer books).

A few years later I started reading SF chronologically, and like The Space Merchantss who I thought was very dated (especially the advertising slogans) the first time I read it, I liked the Foundation series better when in retro mode, but I liked Van Vogt’s Slan and World of Null-A better. When I was a kid my imagination went wild with the covers of the SF books in my father’s library. But when I got older I realized the stories were more mundane. Van Vogt is not well regarded today, but to me he’s the one writer who came closest to capture in words the Sense of Wonder that the book covers promised.
I thought it was too bad he was seduced by Dianetics in 1950 and effectively ended his career, but he has also said in interviews that he had run out of ideas or words to that effect,