Terry Carr died 34 years ago, in 1987. A whole generation of fans has arrived since his death, discovered science fiction, argued over the Star War sequels, and settled comfortably into middle age to raise contentious young SF fans of their own.

So fans today could be forgiven for not understanding how thoroughly Carr dominated the field during his lifetime. Before he died in 2018, Gardner Dozois was seen as the preeminent editor and taste-maker in 21st Century science fiction, winning the Hugo Award for Best Professional Editor a record-shattering 15 times, and editing 35 volumes of the perennially popular The Year’s Best Science Fiction. But in 1979, the year Best Science Fiction of the Year #8 appeared, that crown belonged to Carr, and he had no less than four books — including three Year’s Best — place ahead of Dozois’ own Year’s Best installment in the annual Locus Poll for Best Anthology.

Here’s a selection of Best Anthology winners in 1979, according to Locus.

Four of Carr’s anthologies — Universe 9, The Best Science Fiction of the Year #8, The Best Science Science Fiction Novellas of the Year, and The Year’s Finest Fantasy — placed on the list, including two in the top three. Carr’s Year’s Best SF volumes beat all the other handily, including the Saha/Wollheim 1979 Annual World’s Best SF, which came in at #8, and Dozois, who came in at #18.

Looking it over, there are some very significant titles buried in that list — including the first volume in Jessica Amanda Salmonson Amazons, and the opening book in one of the most consequential anthology series in 20th Century fantasy, Robert Asprin’s Thieves World.

Dozois took over the Best Science Fiction Stories of the Year anthology series from Lester del Rey in 1977, and edited a total of five volumes (only three of which appeared in paperback, from Ace and Dell). When the series came to and end in 1981, Dozois of course found a new publisher — Bluejay Books’ James Frenkel, ex-editor of Dell’s SF line — and launched the much more successful The Year’s Best Science Fiction annual series in 1984.

1979 was a monumental year for science fiction. Star Wars had been released in 1977, ushering in the era of big-budget SF blockbusters, and suddenly science fiction writers who’d been toiling in the word mines with limited success found the doors to bestseller lists kicked open for the first time. Here’s Terry Carr from his introduction to The Year’s Best Science Fiction #8.

Science fiction is in the midst of an era of unprecedented popularity, a situation that’s making fascinating changes in the field. First. it means much more money for the established name writers of science fiction — and because so many publishers have inaugurated new SF programs or greatly expanded existing ones, it also means that new writers are able to sell many more stories and novels than ever before, thus accelerating their development as authors and making it possible for them to become established names themselves in just a year or two.

Some science-fiction writers today have found themselves able to sell their first or second novels for sums like fifty thousand dollars. As recently as five years ago, even the most famous of SF writers would probably have been astonished at having such a sum offered for a novel.

The change in the monetary climate of science-fiction writing is bringing profoundly favorable results. We can ignore the doom-criers who grumble that a plethora of money must inevitably harm the esthetic achievements of Serious Writers. Not at all: a lack of money is what usually limits the quality of writing in any field for if a writer can make no more than two or three thousand dollars for a novel, it’s impractical for that writer to devote more than a month or two to the writing of a book.

As usual, Carr is right on the money. The economic boom in SF in the late 70s brought enduring changes to the field, including a lot more money for writers, and a major boom in written in SF that lasted well into the 80s.

Sadly, novel advances haven’t changed much since the golden days of the late 70s. A $2,000 – $3,000 advance for a debut SF novel isn’t unusual even today, and those $50,000 advances Carr talks about are few and far between. When I sold my debut novel The Robots of Gotham to Harcourt Mifflin Harcourt in 2016, I felt lucky to get a $20,000 advance. 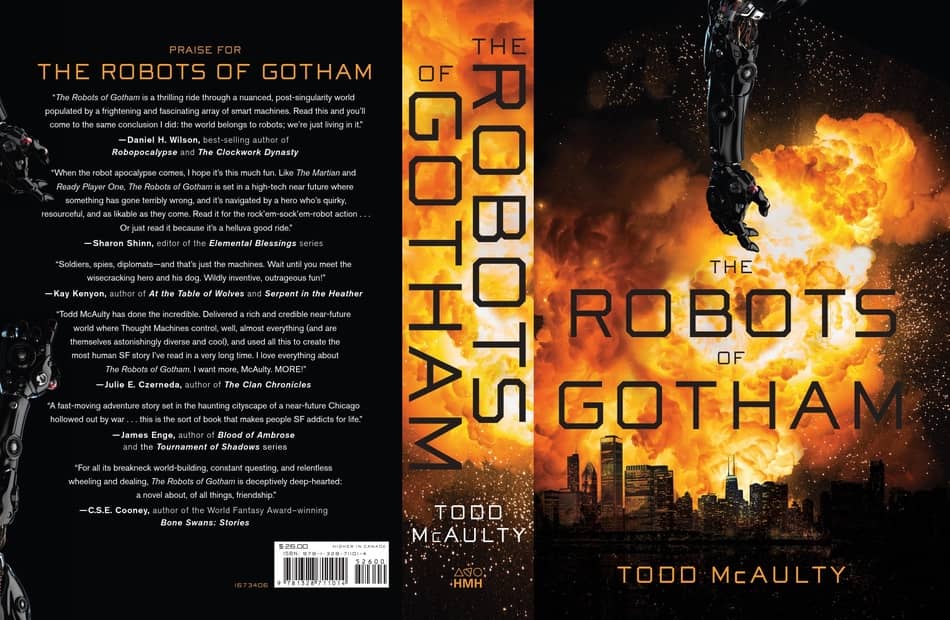 Here’s the complete Table of Contents for The Best Science Fiction of the Year #8, which included six Hugo Award nominees, five Locus nominees, and one Nebula nominee.

Although Best SF 8 is packed with Hugo and Nebula nominees, it doesn’t contain any winners — which instantly made me curious to see what did win the major awards that year. Here’s the Hugo winners: 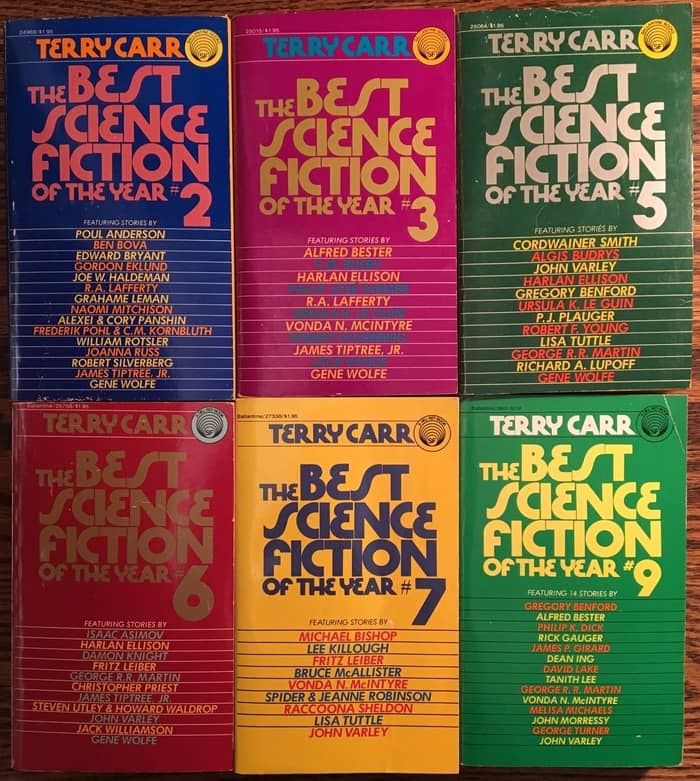 We’ve covered many volumes of Terry’s Carr Year’s Best over the years; here’s a sample.

I’ve got all (I think) of Carr’s Best of Anthologies for science fiction, as well as most of the fantasy volumes. In fact, I’ve got most of the titles in that list. An excellent editor and anthologist. He is missed, even if most younger readers don’t realize they miss him.

Like all the best editors, Carr was a champion for top-quality fiction, and especially the writers he admired. By the late 70s, showing up in a Carr anthology was a significant boost to your career, and greatly increased your chances of major awards recognition. He could catapult a new writer to the top of the field with just a few words in his introductions.

I’m so happy to see this book! It was the first Best of Year volume that I ever bought, and I still have it (Hugo and Nebula Award anthologies not counted.) I bought the Terry Carr annual every year and I’m still sad about #11, which I left behind on a plane. Terry Carr’s annual consistently beat its rivals in the Locus Poll every year—the one in this article didn’t win the poll, but it’s still ahead of its rivals.

Guilty secret: I STILL haven’t finished reading the thing! Been meaning to read the unread stories, but life is short and bookshelves are overflowing!

Such a wonderful memory! This is the book that changed my writing life. I’d earned several hundred rejection slips before Ed Ferman at F&SF took “Death Therapy.” It was my second published story, the first being a miserable joke story in a magazine. that immediately failed. When Terry Carr picked it, I started believing that I ought to stick with this writing thing.