Avalon Hill has long been a company known for its war gaming roots, though it has also dabbled in roleplaying games. Then there are other games. Like Gunslinger. Gunslinger is a bit different. It’s not a war game. It’s not a roleplaying game. It’s sort of both. And neither. I suppose Gunslinger could be called an Old West gunfight simulation game. So, while not exactly a war game, it is a combat game, and while not really a rpg, it does have rpg elements and something of a rpg feel to it.

Designed by Richard Hamblen and released by Avalon Hill in 1982, Gunslinger is a board game (sort of) for up to seven players, with each acting as a character in a gunfight. The game includes stiff cardboard maps, tons of cardboard cutouts, cards upon cards for character actions and results, charts and charts and more charts, and more rules than names in a telephone book (they still make those, right?). It’s already starting to sound like a tabletop rpg. Except there are no dice.

The rules are simple.

Okay, who am I fooling? This is a gunfight combat game designed by war gamers. The rules are not simple.

Character pieces are placed upon a game board, one of the supplied maps. Then are placed aiming markers, and sometimes markers for a character’s head. And then sometimes markers for guns and other items, though most often these markers are actually placed upon a character’s Legend Sheet (kind of like a rpg character sheet). Unlike a rpg, you don’t create a character but choose your character from a list, so you might only be a simple banker or you might be Billy the Kid.

From there … geez, I don’t think there’s enough bandwidth to get into the rules of Gunslinger, at least not deeply, but I’ll try to sum things up.

Each turn is made up of five segments, with each turn consisting of two seconds of time. At the start of their turn, players secretly play their action cards, then they must follow through on those actions. Everything from running to cocking a gun to shooting and more can consist of an action. Numbers on the action cards determine the order of players’ actions. Another number on an action card shows how many segments it will take to perform an action. For example, cocking a gun might only take “1” segment of action but running might take “2” segments; this also means the character’s gun would be cocked on segment “1” while they would run on segment “2.” And yes, different characters can act at the same time. Oh, lest I forget, there are also Delay Points that can come into play, and those can (obviously) delay one’s actions.

Once a shot has been fired, the results of that shot are determined before any other actions in that particular segment. Effects of a shot (wounds, death, etc) are placed upon a character at the end of a segment. How effective a particular shot happens to be is determined by a Result Card drawn by the player whose character fired their gun. Gun Malfunctions are even possible. But the Result Cards don’t tell everything. Oh, no. The Impact Table must be consulted. Results can vary depending upon the skill of the shooter, the type of firearm used, the quality of the ammunition, and a few dozen other factors like time of day, cover, wind, and how many bugs were crawling around on the ground nearby. Okay, maybe I made up that last part about the bugs.

A particular game, or showdown, comes to an end when its Game Length runs out. Victory points are then tallied and a winner or winners is decided from that.

Those are the basics, the bare basics, of Gunslinger. You might get the impression from some of my snippiness above that I don’t not enjoy this game, but you would be wrong. I actually love Gunslinger, but trying to describe it in a fashion that gives the game any justice is not the easiest of tasks. I will say I’ve barely touched upon the game at this point, for there are a lot more rules and charts that could be mentioned, but I also want to add that despite all these rules and charts, gameplay is actually pretty fast once you’ve got a feel for the Gunslinger system. On a related note, the meticulous rules of this game make it one of the more realistic small-scale combat systems I’ve run across, far surpassing any rpg and bringing a strong dose of realism.

The game itself offers numerous scenarios for play, and there are even rules for a limited form of roleplay. Campaigns of a sort do exist, allowing for a series of showdowns, and even historical gunfights can take place. There are also rules for brawling and fighting with melee weapons, and there are rules for horses, terrain, and for fighting when combatants can’t see one another. There are even optional rules for roofwork, dynamite, wagons, smoke, and much more.

While not specifically a roleplaying game, I could see how a group could take the rules for Gunslinger and make their own rpg system or longterm campaign. Any referee or game master would have to do a fair amount of fudging, at least when it came to actions and abilities not covered by the rules, but still there could be intense action and fun to be found.

Should you give Gunslinger a try? Well, it’s out of print, though the original in the great big box Avalon Hill games of an earlier age were known for can sometimes be found for sale online. The price won’t be cheap, but the thrills might be worth it. If you are a fan of all things Old West or if you’re an experienced war gamer, you might love Gunslinger. Experienced rpgers will also likely find a lot of love for Gunslinger. Beginners will probably be somewhat overwhelmed. But hey, everybody’s got to learn sometime, right?

Hallelujah! BG is back!

I noticed that too! For a while I thought the problem was just my browser.

Right? Withdrawal was pretty rough – I was starting to get the shakes! 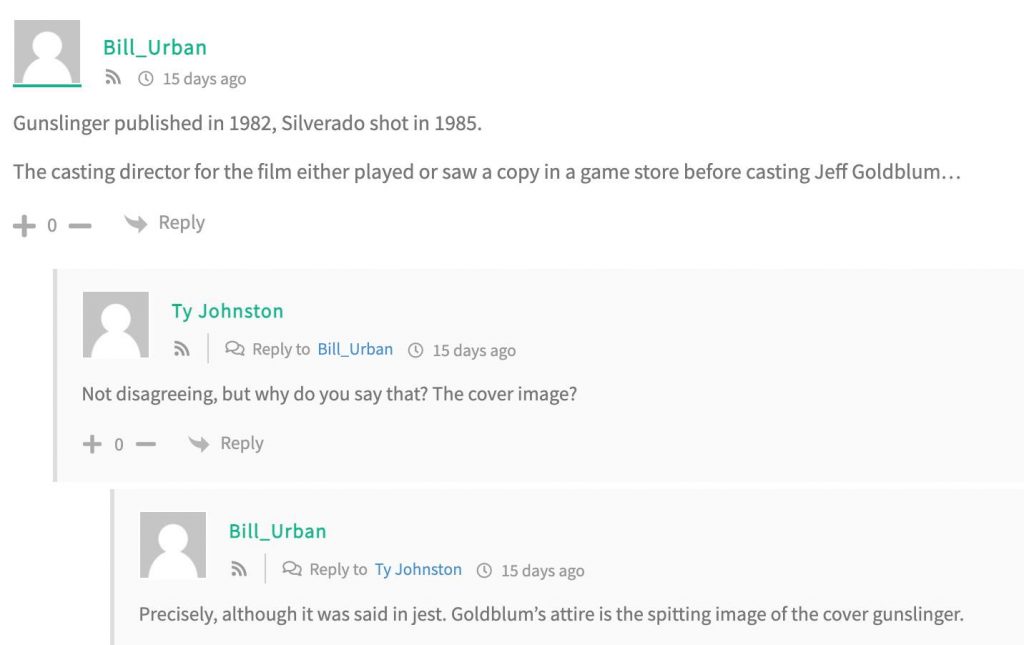 > The rules are simple.
> Okay, who am I fooling? This is a gunfight combat game designed by war gamers. The rules are not simple.
Ha! Okay, that made me LOL.
Maybe the rules weren’t simple. But you sure got a lot for your money.