In 1993, Bruce Campbell starred in an excellent television show set during the nineteenth century in which he went on adventure after adventure, often in the company of a beautiful woman, and always seeking “the next big thing,” which led to steam-punkish versions of modern inventions. The show was clever, fun, entertaining, thoughtful, and lasted one single season for 27 episodes.

In 2000, Bruce Campbell starred in a television show set during the nineteenth century in which he went on adventure after adventure, often in the company of a beautiful woman, many episodes features steam-punkish versions of modern inventions. The show was juvenile, intermittently fun, and lasted two seasons for 22 episodes.

The first show was The Adventures of Brisco County, Jr. The second was Jack of All Trades. In the latter show, Campbell portrayed Jack Stiles, an American spy sent by Thomas Jefferson to the fictional island of Palau-Palau in 1801. Stiles was teamed up with British aristocrat and spy Emilia Rothschild (Angela Dotchin) and they tried to bedevil the French authorities on the island, represented by Napoleon’s brother, Governor Croque (Stuart Devenie) and his guard captain, Brogard (Stephen Papps). 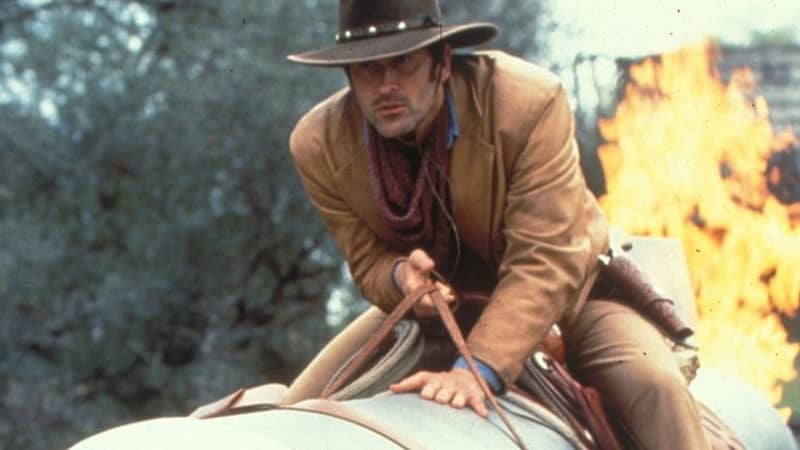 Bruce Campbell in The Adventures of Brisco County, Jr.

One of the problems with the show is that while Campbell had demonstrated excellent chemistry with his co-stars on Brisco County (Julius Carry, Jr., Christian Clemenson, and Kelly Rutherford), on Jack of All Trades, his chemistry with his co-stars (Dotchin, Devenie, and Papps) was never able to develop. This was further damaged by Campbell’s character’s clear misogyny. His constant references to Dotchin’s Emilia Rothschild as “sister” or “babe” is both out of place and belittling. While Emilia was perhaps the strongest character, the strongest caricature was produced by Devenie’s Governor Croque. 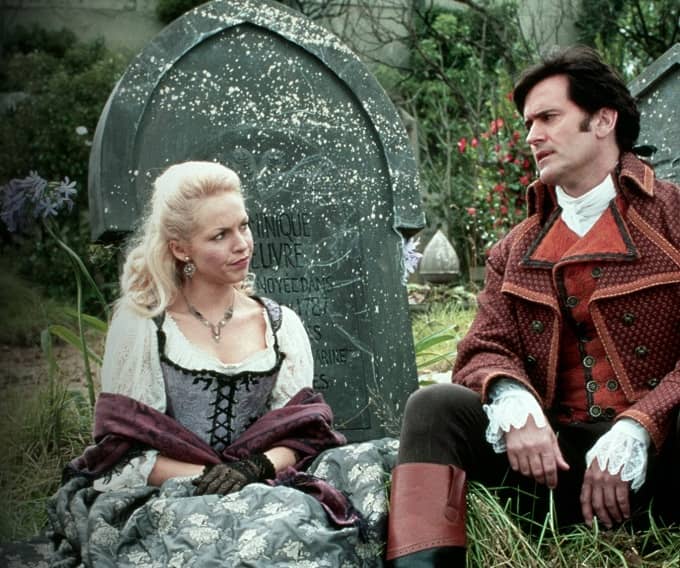 Angela Dotchin and Bruce Campbell in Jack of all Trades

Although Jack of All Trades was an action show, the first half-hour action show produced in the US since the 1970s, it was also a sitcom, with the comedic elements infiltrating all aspects of the action. Unfortunately, the humor was not well integrated. Action sequences had a tendency towards live action representations of cartoon violence. Characters could fly through the air and fall on their heads with no discernable penalties. There was a level of camp that nearly achieved the level of the 60s-era Batman, and missed out only because the producers provided actual sound effects, rather than the words “Splat” or “Bam” on the screen. 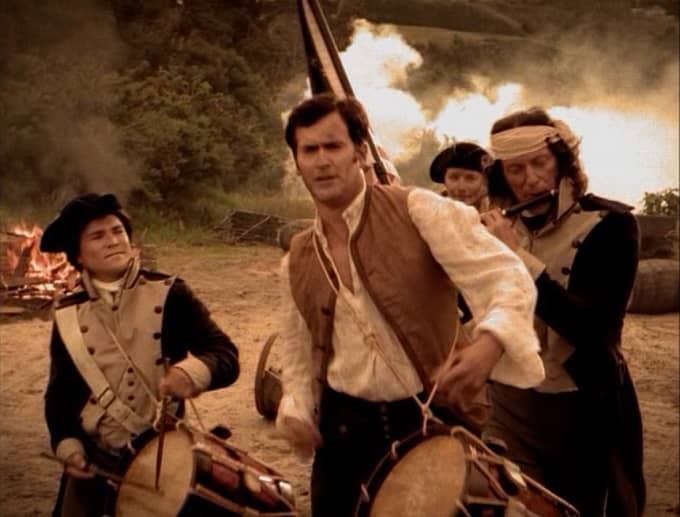 Bruce Campbell in Jack of all Trades

Much of the humor came from anachronisms, both in Emilia’s inventions and Jack’s references. Often these jokes failed to work and simply came across as the writers not caring about historical accuracy. Set in 1801, the show contains cameos from a veritable who’s who of eighteenth and nineteenth century history, including Benjamin Franklin (died 1790), Blackbeard (died 1718), George Washington (died 1799), Catherine the Great (died 1796), as well as Meriwether Lewis and George Clark (depicted as much older than the 27 and 31 they would have been historically). Needless to say, maintaining any link to the actual historicity of the period was optional for the show’s writers. The small island was also visited by France’s Emperor Napoleon (played by Verne Troyer) and England’s King George III (Mark Hadlow). 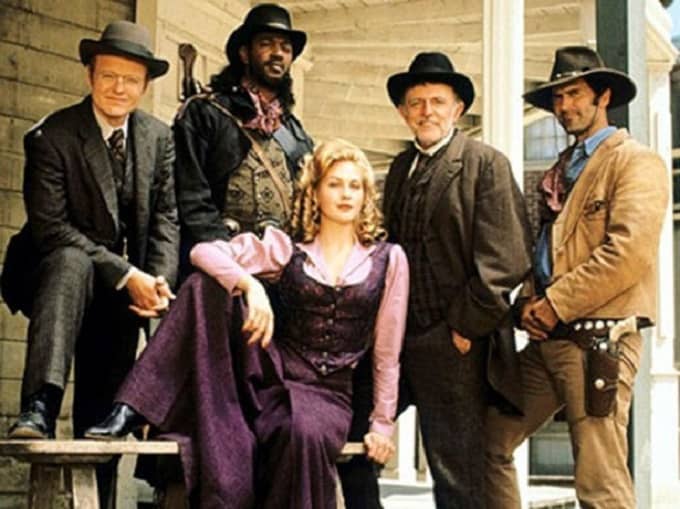 The cast of The Adventures of Brisco County, Jr.

While the opening of Brisco County indicated the sort of high stakes adventures the main character would experience, set to a rousing musical theme (frequently used since for NBC’s Olympic games coverage), the theme for Jack is sung over shots of pirates carousing in a tavern, and ends in a manner that suggests that the show not only doesn’t take itself seriously, but offers a commentary on traditional sitcoms. While the former may be true, there is no real attempt to subvert the tropes of the sitcom. Instead the show wallows in the insipidness of the most banal sitcoms. 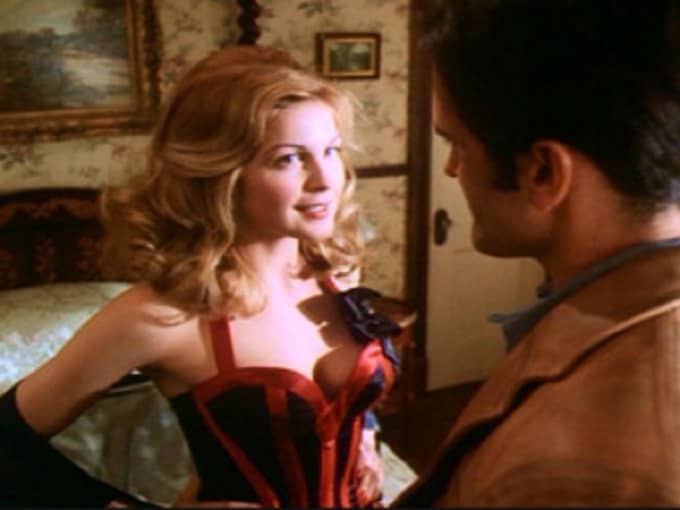 Kelly Rutherford in The Adventures of Brisco County, Jr.

Campbell has demonstrated that he can have a strong screen presence, not just in Brisco County, but in other television shows and films, and, in fact, he does have a strong screen presence in Jack of All Trades. The problem is that he doesn’t display the confident charisma and braggadocio the character seems to require. Similarly, Angela Dotchin’s character is presented as a strong and intelligent woman, except when the exigencies of the plot require her to be less than competent. The banter between her Emilia and Campbell’s Jack feels repetitive and far from the witty repartee that Campbell had with Rutherford on Brisco County. 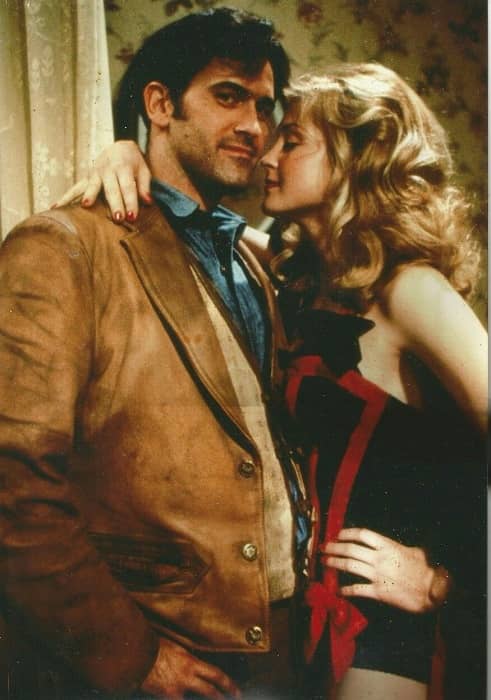 Campbell and Rutherford in The Adventures of Brisco County, Jr.

Historical adventure series can work and historical comedies can work.  The two can even be combined. However, Jack of All Trades failed to capture the lighting in a bottle that was The Adventures of Brisco County. The writing wasn’t of the same quality, the anachronisms felt as if they were the result of laziness rather than purposefull, and series lacked the budget, and the actors never developed the connections on screen, to fully vest the viewers in their adventures or relationships.

Steven H Silver is a seventeen-time Hugo Award nominee and was the publisher of the Hugo-nominated fanzine Argentus as well as the editor and publisher of ISFiC Press for 8 years. He has also edited books for DAW, NESFA Press, and ZNB. He began publishing short fiction in 2008 and his most recently published story is “Webinar: Web Sites” in The Tangled Web. His most recent anthology, Alternate Peace was published in June. His first novel, After Hastings, was published by Eric Flint’s Ring of Fire Press earlier this month. Steven has chaired the first Midwest Construction, Windycon three times, and the SFWA Nebula Conference 6 times, as well as serving as the Event Coordinator for SFWA. He was programming chair for Chicon 2000 and Vice Chair of Chicon 7. His last article for Black Gate was An Ignored 1894 Science Fiction Novel.

I picked up Jack of all Trades on DVD several years ago, having never seen the show. But I thought, Bruce Campbell, action/comedy, it’s got to be great, right? The first episode was so painfully bad I never watched the second, and the show has been gathering dust on the shelf ever since. Whenever I consider giving it another try, I usually watch a Blackadder instead.

Thomas – I chuckle, because you and I are opposites on some stuff, as we’ve discussed. Brisco County is definitely another. They dropped the ‘narrator character’ after the pilot, so that reporter guy is gone. They let the show tell itself, with Brisco in the center.

Only Justified surpassed Brisco County for me.

Bob, Brisco is another one I have on DVD but have never gotten around to. Unlike Jack, the opinion seems universally positive, so I definitely intend to get to it eventually.

Oh. I read your comment wrong. I thought you found Brisco painfully bad. My mistake.

I liked Jack of all Trades, though the second season felt like it was rushed. But then i would never try to compare those to series: totally different target group and genre (action can be tacked on just about any series…).
Brisco Country was trying to have a coherent story arc, JoaT was one-off (sometimes physical) comedy that worked heavily with stereotypes. And that is *fine*, not every show has to subvert the genre…
As such a stereotype, Jack did consider women inferior to men for his Job (and did get regularly his comeuppance for that, which was part of the joke).
Looking at the dictionary definition for mysonogy, i don’t think you chose the right word there to describe Jack’s character. Belittling, sure, but hate of women?

‘Brisco County’ is my second-favorite all time TV show. It’s brilliant. Jack of All Trades is worth watching through. It’s lowbrow, but I know a lot of folks who like lowbrow humor – I can’t abide Dumb and Dumber (a prominent one), but people love it. To each their own. I like Campbell being silly. It’s no Brisco County, but it’s goofy fun.

And I think the theme song is a classic

In his second autobiography, Campbell tells the story of the JoaT production group being unable to find horses for the show. Peter Jackson had literally bought up every available horse in New Zealand for LotR. Campbell tells people he has never seen the movies, because he was so annoyed they could only get broken down nags for his show, because of them.

I loved “Jack, ” and was sad when it ended. It had the most rousing theme song of its time, one I still pull up on YouTube now and then when I need to raise my spirits.

I wasn’t familiar with Brisco County, however. I do believe I see John Astin in the picture you posted.

Yes, John Astin had a recurring role throughout the series. He appeared in 7 of the 27 episodes.

I wrote about Brisco a bit in in one of my ‘What I’m Watching’ posts.

It’s a TERRIFIC show. And it hasn’t faltered with age.

Astin was great as an absent-minded inventor.

I’ll have to check it out.

While I admit to enjoying Jack of All Trade’s low-brow humor, Briscoe County just one of the best TV series I’ve ever seen. Lightning in a Bottle is an apt description; with the exception of Bruce Campbell, I have not seen the series regulars in anything that matched their work in this unique show.

Prior to Brisco County, I was familiar with Julius Carry from the amazing comedy Doctor, Doctor and John Astin from The Addams Family, of course.

Brisco County Jr has Comet. Jack of All Trades was inferior out of the gate!

That’s Comet the Wonder Horse to you.

“He’s not that amazing. It took him two tries.”