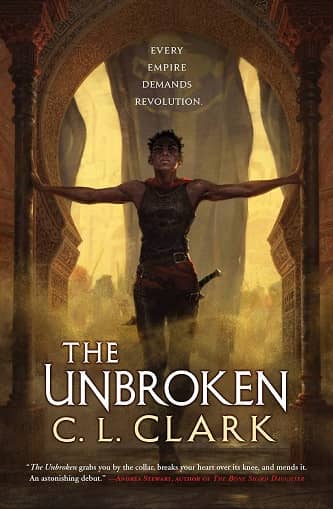 Typically when I read an ARC I’m definitely going to review, I take notes. Simple stuff like this is a cool moment to mention or I think the author is going for X that help frame my five hundred words when I sit down to write.

For The Unbroken, I wrote ABSOLUTELY NOTHING while reading because at no point did I want to break my journey through this narrative. Somehow I knew that as soon as I finished, I’d be at my computer typing. Which is what I’m doing right now.

One thing that sets an excellent fantasy novel apart for me these days is gut punches. You’re thrown into a world with a set of expectations for certain characters, and how quickly the author twists that around tells me the kind of ride I’m being taken on. In the first chapters of The Unbroken, Clark gives us a suite of amazing characters and a clear narrative trajectory – then suddenly one of those characters is gone, and another’s world is turned upside down, and the trajectory changes. And then halfway through it changes again, as the destination looming in the background turns out to be impossible, and you need to pivot alongside characters trying to navigate a changing, complex world.

There are no easy fixes or apologies between Clark’s characters, either. Decisions leave a permanent mark, much like in real life, and people need to navigate a new understanding of each other much like navigating the world. Touraine and Luca’s relationship is complex, and an example of what readers talk about when they say they want realistic, flawed, problematic women in their fiction. Wanting to root for them or keep shipping them almost feels wrong at times, as each makes decisions I can’t blame the other for not forgiving, no matter how badly they want to. Gut punches, like I said.

The way that Clark tackles colonialism is all about navigation, too, and by the end it’s impossible to imagine how anyone will escape Qazāl in one piece. Except no one does, really, and it’s the things they can heal from and the things they can’t that will make you ache for these characters, even as a possible future for Balladaire and Qazāl glimmers in the distance. It’s an imperfect one, but maybe the only one that’s achievable or deserved, after being mired in colonialism for so long.

Which is another brilliant aspect of The Unbroken: showing how colonialism is a trap for everyone involved, from the victims of colonial rule to those perpetuating its worst violence and subjugation, while thinking they’re doing the right thing. Because at its core this narrative is directed by characters’ choices, no matter how flawed they might be.

Pre-order this book. Read it. Recommend it to your friends. I know I am.

And unfortunately for every other book I read this year: The Unbroken is going to be a tough act to follow.

An Ottawa teacher by day, Brandon has been published in On Spec, Pulp Literature, THIS Magazine, and elsewhere. He just launched a Twitter account for ROARS AND RUST, an original D&D setting being developed with authors Marie Bilodeau and Evan May. Find it here! You can follow Brandon at brandoncrilly.wordpress.com or on Twitter: @B_Crilly.