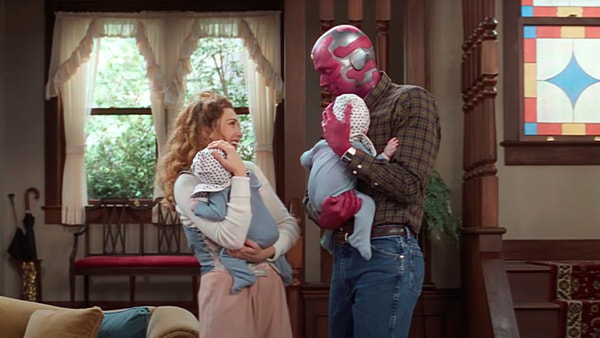 When the two first episodes of Marvel TV’s new WandaVision dropped six weeks ago, I blogged about my reaction to something that was at tonal right angles to everything else I’d seen from the MCU. I just finished watching the penultimate episode and now I think that the show is actually not even in the same ballpark as anything else produced by Kevin Feige.

It feels like the MCU and Vertigo Comics snuck off to have a weird love child. This series owes a lot more thematically and tonally to Tom King’s 12-issue Vision series (my blog thoughts here) than any of the regular Avengers comics. I’m going to go into why I would put this show in the same category as Westworld, but I might have to spoil one or two things. If that’s within your spoil tolerance, come onboard. If not, don’t hit the read more yet. I’ll wait. 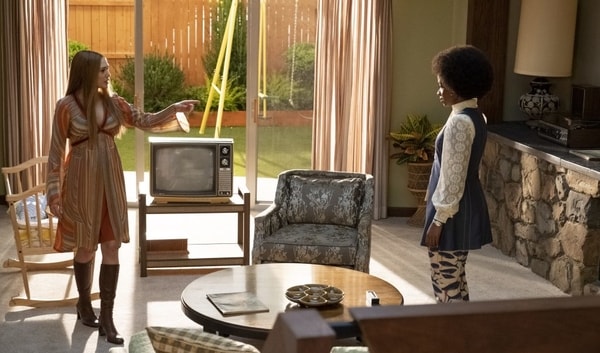 The reason I compared WandaVision to Westworld (which I blogged about here) is that like the HBO premium series, is that (1) there’s a central mystery about the nature of the situation itself, (2) there are multiple narrative layers woven together, (3) uncertainties about time, and (4) uncertain reliability about what the characters say and even see.

The creators of WandaVision are deliberately engaging with the audience in a different way. We’re given less information. We’re handed a mystery. And we’re required to interpret what’s going on in ways that few shows require us to do. It’s wonderful when a show does this and has these layers of symbolic, metaphorical and psychological clues. 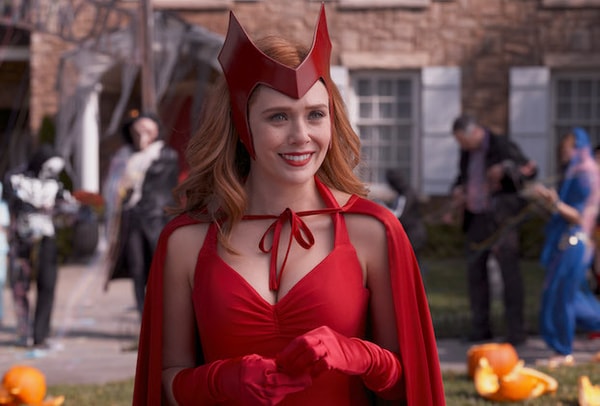 The reason these layers are there is because this is a story about a woman in grief, a woman who has lost everyone she loved in her life, and the way she copes with it. There is denial. There is depression. There is anger. There is fear.

And all of that emotion is woven into the narrative of Wanda and Vision living in a sitcom. We don’t know for most of the series who put her there, or if she put herself there. We don’t know who is in control, because sometimes the interior narrative bends to her will, and sometimes things escape her control. Does that mean an outside force is acting on her or that she’s not strong enough or stable enough to hold together this emotional nest, or does it mean that we can’t trust what she sees? 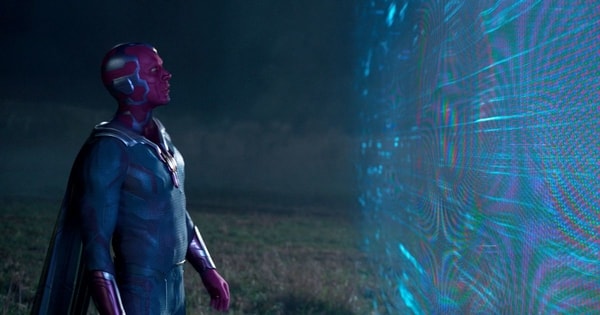 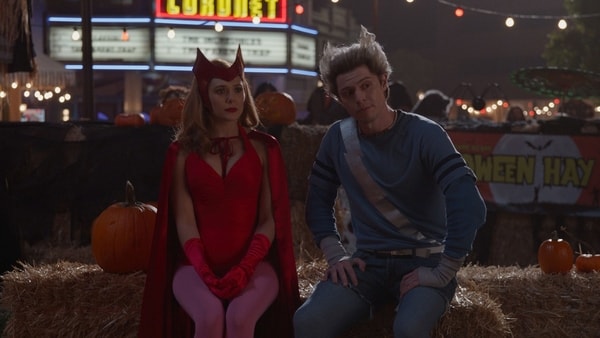 These two layers interact with each other in fascinating ways. Take for example the laugh track. The laugh track is a tried and true signal to the audience of the intended tone and even pacing and timing of a show. And yet when it overlays something the audience knows (from previous movies or just stellar acting) is actually very painful or a call for help, there’s a weird awkwardness that we ourselves begin to feel. Without the laugh track, the full darkness of the dialogue and its emotional context would be unsettling. But we experience this directly when the laugh track is turned off.

The other reason I think comparing it to Westworld is a useful thing is that both shows have repetitive, Groundhog Day-like structures. In Westworld the abused robots awoke every day, memories and torments wiped clean, but something was simmering and changing beneath the surface of many of them nonetheless. In Wandavision, each episode opens in a new decade of sitcoms. Episodes 1 and 2 were modelled off of sitcoms of the 1950s and 1960s. Episode 3 is a Brady Bunch-esque feel and Episode 4 in like Family Ties and so on. 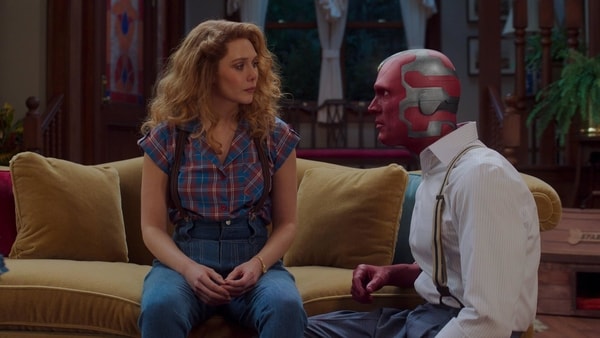 The reboots don’t happen in isolation. As sitcoms became more sophisticated and able to deal with more serious themes, so too do these episodes lose their innocence, while beneath the surface (a third narrative layer), we can see characters changing.

I don’t want to make anyone think that it’s all just sitcoms, by the way. The invasion of the toy helicopter in episode 2 was just the beginning. The intrusion in episode 3 is more disturbing and collides the narrative layers, setting up our first view of the outside world in episode 4. And episode 4 is an important, because for the first time, we’re seeing the world through the eyes of more reliable narrators, watch them set the stakes, even if they don’t understand the mystery either. 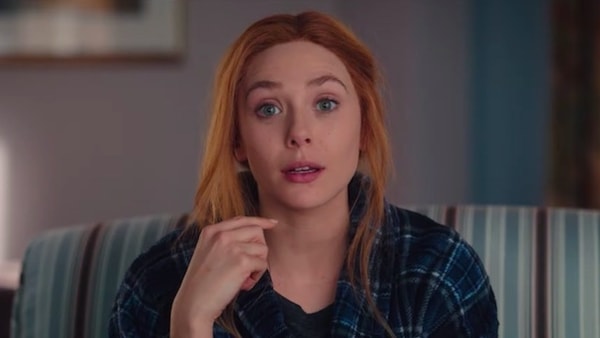 I can’t say enough good things about this show. I did read some criticisms online about people finding the first two episodes too slow. I found them just right, but your mileage may vary. The creators were setting the necessary stage, introducing us to the strange rules of the world Wanda and Vision inhabit. The pace from episode 3 accelerates a lot. I will note that a couple of weeks ago, a group that determines popularity from things like streaming subscriptions, social media posts, and pirating site activity found that WandaVision was the most popular TV show in the world.

I gave up on this at episode 7. I thought it was a massive disappointment. There wasn’t one episode in which I liked at least half of it. I couldn’t keep forcing myself to watch it.

I get trying something new. Galavant is a terrific example of that. But while I’ve discovered shows like The Mandalorian, Bosch, Cobra Khai, and The Expanse, the past couple years – and thought they ranged from good to superb – Wandavision is literally Marvel’s Cop Rock for me.

Nothing about it worked. And I’m a fan of I Love Lucy, and Bewitched, and Dick Van Dyke. The attempted homage fell totally flat.

The last time something dashed my hopes this greatly, it was the abysmal BBC remake of Dirk Gently.

Looking forward to The Falcon and The Winter Soldier to get things back on track.

Derek, I’ve got to admit, I’m of the same opinion as your article.
I put off watching this new series for some weeks as I was afraid it would be the ‘same old MCU formula’ churned out in a slightly different way. But after reading a number of comments on various sites, I thought, ‘What the heck!”
And then having seen the first 2 or 3 episodes, WTF? But there was ‘something’ about it that kept me watching. And I’m glad I did.
The sitcom scenarios; the mystery breadcrumbs provided by strange/colored articles; the measured introduction of ‘real-time/world’ snippets without rushing to give the game away; the gradual change in the characters themselves as the truth begins to emerge. Genius!
I, for one, am glad I stuck with it. Wandavision is a breath of fresh air in a franchise that has become a little staid of late. I wish the MCU could be as daring with all the works in the pipeline.

Hey Bob: I totally hear you. I have another friend for whom it didn’t land either. I think what I loved about it was that it was so different, that it was trying to achieve a different effect from everything else in the MCU. I told my son a while ago that I’m superhero’d out. Like I can’t after 25 movies. He loved WandaVision and is expecting me to love Falcon and Winter Soldier but I don’t think I can do another hour of fisticuffs, because in a way a lot of it just feels like watching the same story with different costumes. But I know I’m in the minority on that – Disney is making bank on their buy of Marvel. So that’s why WandaVision hit me in the right place – I think a Vertigo-style take on a situation.

Andrew: I’m really glad you liked it! My son and I were discussing the second Dr. Strange movie and I told him I hope it’s a lot more like WandaVision than Dr. Strange #1, but I’m not hopeful. I agree with the staid point you make, but the MCU is making money hand over fist on the formula. That being said, Captain Marvel and Black Panther had some interesting depths to them. I think if Marvel can wed personal stories I haven’t seen before to adventure, they will probably keep me. But WandaVision is something really unexpected and special that I’m not sure I’ll see again.

Derek, I’m about midway between you and Bob on Wandavision. I don’t hate it but I also don’t love it. I am intrigued as to where the story will end up, and I definitely applaud the creators for doing something different within the MCU (which has been much needed), but yeah, overall it’s been too slow for me, even beyond the first 2 episodes. I don’t mind a slow burn, even enjoy it quite often in literature, but I’ve felt the little hints dropped here and there have either been too subtle or one has to have watched every single MCU movie plus all the mutant movies and possibly read every single comic ever featuring Wanda and Vision in order to catch everything and enjoy the show. For me, there’s been too little payoff, though that might change by the end. I’ll watch, though, and I’ll remain hopeful. The one thing I don’t think will be done is a ruining of the show, such as the finales with Dexter and How I Met Your Mother; that’s unless they resort to, as you called it, fisticuffs.

My wife and I, and even our 10yo daughter—who is not normally into movies or TV with a lot of talking amongst adults, all love WandaVision. After the first episode, our daughter was a little wary of it, but I just told her that it’s basically a mystery that we have to solve, and she’s been into it ever since, going so far as to rewatch Avengers: Age of Ultron after we finished one of the episodes.

Unlike you and some of the other comments, I am not even close to over the MCU. And the reason why is basically where I’d disagree with you about WandaVision being not even in the same ballpark as anything else Feige has done: Throughout the MCU run, they have continuously done a series of different movies. Some “regular” superhero movies, yes, but even those better than most that had come before. But also, war movies, spy thrillers, outright comedies.

And now with WV, we finally get “the weird.” For me anyway, it’s probably not quite as great as the other recent weird examples, Legion and Doom Patrol. Doom Patrol is my current favorite TV series, and I believe the first season of Legion may be among the best of any TV season, ranking up there with, for example, Lost season 1. The scene late in season 1 of Legion that is set to Bolero while Oliver Bird spins musical notes out of air, David tries to escape a mental maze prison, and “the monster” torments Syd and company is among the most fantastic set pieces I have ever seen.