Tom Godwin is something of a tragic figure in SF. He’s remembered today for a single short story which remains hugely influential. Here’s the third and fourth sentence of his Wikipedia entry:

He is best known for his short story, “The Cold Equations.” Published in 1954… [its] controversial dark ending helped redefine the genre.

That’s not an exaggeration. “The Cold Equations” is still sparking conversations today, nearly 70 years after it was written. (I noticed Mark Kelly kicked off a lively discussion in Facebook’s Best Science Fiction and Fantasy Short Fiction group just last week by asking “Can anyone recall specific fictional responses to Tom Godwin’s “The Cold Equations”?” Last time I looked there were 35 responses from Rich Horton, Sheila Williams, Piet Niel, and many others).

Godwin wrote three novels, beginning with Space Prison (1958) and its sequel The Space Barbarians (1964). The former has a much better reputation with modern readers, although it’s the second book which interests me today.  Here’s another tidbit of history from Wikipedia:

Godwin had a spinal disorder known as Kyphosis, which results in a curvature of the spine, making him appear hunchbacked… In the early 1960s, Godwin was living in a remote area of northwestern Arizona with his father writing and making his own drywashers to sell. It was in the summer of 1961 that he met his future wife, Laureola Godwin, and then twelve-year-old step-daughter who he later adopted, Diane Godwin Sullivan, through the sale of one of his drywashers. He went on to base two of the main characters in his second novel, The Space Barbarians, after them.

After Laureola Godwin died, Tom Godwin lost his lifelong battle with alcohol. He died in a Las Vegas hospital in 1980 without any identification; Diane Godwin Sullivan eventually had to identify his body after it was held at a funeral home for a long period.

The Space Barbarians is the first book I remember buying by Tom Godwin. To be honest it was the John Schoenherr cover on the 1964 edition that captured my interest. Though the novel was released two years before it debuted on NBC, that cover fits the Star Trek esthetic perfectly, at least for me. That image would look perfectly at home on the front view screen of the Enterprise in some far corner of unexplored space, as Spock murmurs “fascinating” and Sulu’s hand hovers over the phaser button.

Of the two books, Space Prison seems to have a better rep these days. Here’s an excerpt from my favorite review at Goodreads, by Sara.

How much from scratch? It goes like this: The Gerns have attacked Earth. A shipload of humans flees in the direction of a planet called Athena, whose resources are humanity’s last hope for survival. In transit, they are intercepted by the Gerns. Those with skills useful to their new overlords are taken as slaves; four thousand men, women, and children deemed useless are dumped on a planet called Ragnarok with minimal supplies to sustain them… This is intended to be an execution.

It’s rough. It’s really rough. Four thousand dwindle to under a hundred in the space of a few years and the humans are reduced to near stone-age levels of civilization. But the scant handful of survivors are just that — survivors. And they hate the Gerns with a blazing passion that drives them to take the only practical view of their situation: the long term. They expect the Gerns to return, in fact actively work to lure them back, and the intervening time is not spent in idleness…

This is not a story about Irene, or Bill, or any of their descendants. It isn’t even really the story of a scrappy band of humans triumphing over cruel alien invaders. It’s about what happens when you dump a bunch of people on a planet with everything against them and no resources, and they have to be tough and innovative and yet also cooperative to survive. And most of all, they have to think not just of their own survival, but of how their actions can allow future generations to survive even longer, how they can ensure freedom for their great-great-grandchildren if they can’t get it for themselves…

Godwin has neglected everything that wasn’t directly relevant to the core concept of this group of people starting from the bottom and working their way back up through the layers of civilization… I’d certainly recommend it to anyone who’s looking for a good piece of broad-scope old-school sci-fi. The arc is very different from that of most fiction we’re used to, and that does take a little effort to assimilate, but it’s well worth it.

I still enjoy the blurbs on the back of both novels. We’re a long way from the days when paperback books would clumsily refer to people from Earth as “Earthenians.” I miss them.

Here’s the complete publishing details for both novels.

The Space Barbarians has been out of print since 1964. Space Prison was reprinted last year in hardcover and trade paperback by Bibliotech Press.

I believe I discussed the shorter version of “The Survivors” long ago in a post right here at Black Gate. It’s lots of fun! I’ve not read either of the novels …

I had no idea about Godwin’s Kyphosis. What a sad story!

Space prison looks like a perfect book for my summer vintage sf reading binge. Now to find a copy!

Back in 2003, Baen published an omnibus of Godwin’s fiction (entitled THE COLD EQUATIONS) that included “The Survivors”, which I read a couple of years ago. It was a good story, if a bit dated. I enjoyed it enough to be interested in reading THE SPACE BARBARIANS.

The label “Earthenians” caught my eye, too. I assume it is a portmanteau of “Earth” and “Athena” as it comes right after mention of the two worlds being freed from the Gern, and the inhabitants fearing those “Space barbarians” who freed them.

> I believe I discussed the shorter version of “The Survivors” long ago in a post
> right here at Black Gate. It’s lots of fun! I’ve not read either of the novels…

“To Soon to Die” is the story of a group of humans from a colony ship that was intercepted by a ship of the Gern Empire, aliens at war with humans. (Actually, the story portrays this incident as the precipitating factor in escalating the formerly “cold” war between Gerns and Humans into a “hot” war.) The Gerns took the most qualified humans prisoner, but marooned the “Rejects” on what they called an “Earth-Type” planet. The supposedly “Earth-Type” planet, of course, turns out to be a “hell-world”, called Ragnarok, with 1.5 g’s, long and fierce seasons, inimical local fauna, and a terrible disease that kills many of the humans.

The story follows several human generations as they struggle to survive, often failing, the population dropping to 200 or so, but then adapt and hatch a scheme to lure the Gerns back and take revenge. It’s all a bit preposterous, but kind of fun too. I didn’t believe most of it, but I did like reading it.

I haven’t read Godwin’s one novel, The Survivors, but I know enough about the book to recognize that it is an expansion of “To Soon to Die.” Can anyone say whether it adds much to the novelet?

> Space prison looks like a perfect book for my summer vintage sf reading binge. Now to find a copy!

Right?? According to ISFDB it’s been reprinted about a billion times. I found eight different editions at Amazon (my favorite is the one paired with Ray Cummings’s The War-Nymphs of Venus): 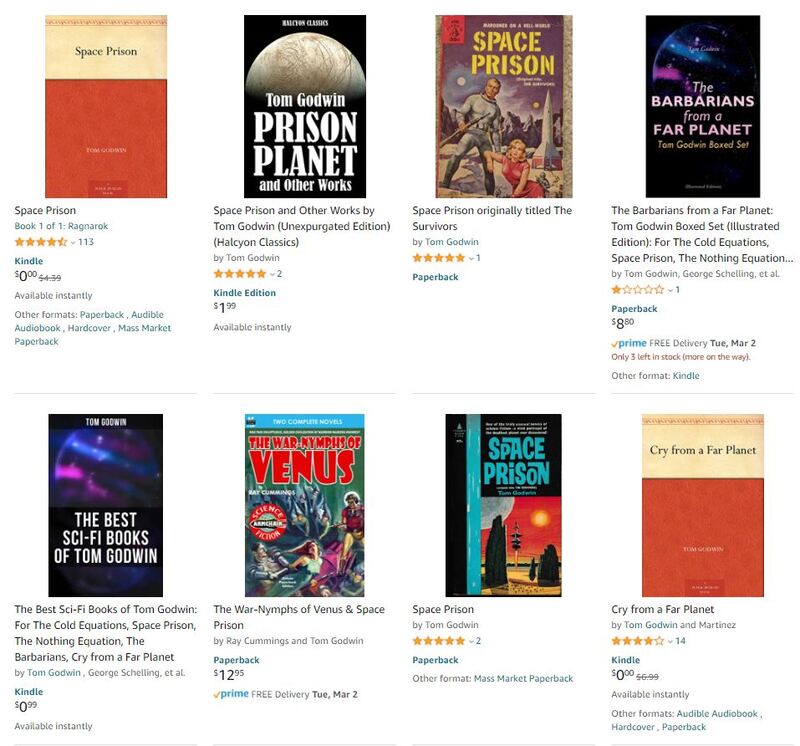 Those Armchair editions are fun. I have several. It’s a great way to get your Ziff-Davis fix.

> Back in 2003, Baen published an omnibus of Godwin’s fiction (entitled THE COLD EQUATIONS)
> that included “The Survivors”, which I read a couple of years ago. It was a good story…

Good memory! I bought a copy but never read it. (And I’m usually not a fan of Clyde Caldwell’s space-babe covers, but I admit I liked this one.)

This is a hard book to find these days. 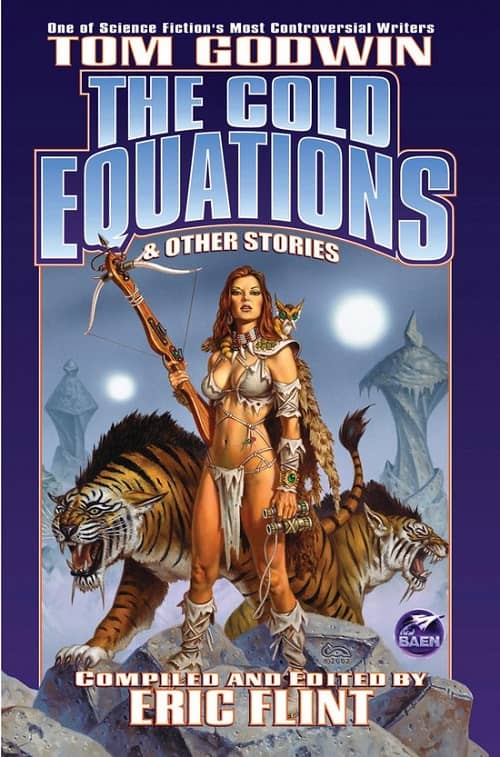 > The label “Earthenians” caught my eye, too. I assume it is a portmanteau of “Earth” and “Athena”…

I was always liked that 50s favorite, “Earthlings.” But maybe I’m just partial to the classics.

> Those Armchair editions are fun. I have several. It’s a great way to get your Ziff-Davis fix.

Are they still being published? I discovered them nine years ago and bought a few. They were a great, economical to get my hands on 40s and 50s era pulp classics, but I haven’t seen them for a while.

I wrote a brief article about them back in 2012:

John – I thought the Armchairs were still being published, but maybe not. Even if not, they put out so many of them that I’ll never be able to read them all. I especially loved that they put out a multi-volume set of the complete Shaver Mysteries stories.

John, the Armchairs are still being released. Their edition of Space Prison was published about three weeks ago.

> I thought the Armchairs were still being published… I especially loved that
> they put out a multi-volume set of the complete Shaver Mysteries stories.

I had no idea — but you’re absolutely right. Armchair has eight volumes of The Shaver Mystery (that I’ve found), all of which reprint contents and covers from 1945-48, during Ray Palmer’s editorial rein at Amazing Stories.

Wikipedia has a nice history of the Shaver Mystery:

Have you read any of them? I forgot that Ray Palmer re-wrote many (all?) of Shaver’s submissions, turning his paranoid schizophrenic ramblings into salable fantasy adventures. Palmer knew how to tell a story, and the one thing often overlooked about the Shaver Mystery was how much it boosted Amazing‘s circulation. Reportedly from 135,000 to 185,000/month, a huge jump.

My Vintage Treasures senses are tingling…. this would make a fun like future article.

> John, the Armchairs are still being released. Their edition of Space Prison
> was published about three weeks ago.

You are absolutely correct. I somehow managed to miss that the Armchair Press reprint (The War-Nymphs of Venus & Space Prison) appeared on February 5, 2021. You can order it direct from Amazon for $12.95:

Glad to see Armchair is still publishing! I just noticed their latest Weird Tales anthology, Masters of Horror, Volume Two which definitely should be on my short list:

I have the first Shaver volume set aside for a suitable moment, John. After the last four years I need at least a small break before I plunge back into madness, paranoia, and conspiracy.