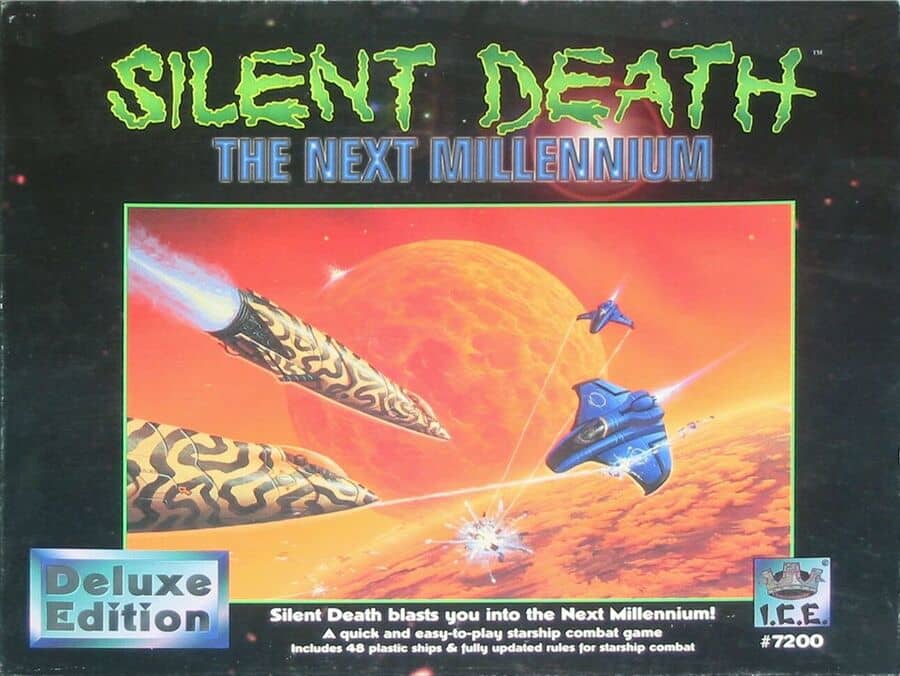 In Part I of this two-part series on the iconic space combat miniatures game Silent Death – Metal Express, published by Iron Crown Enterprises (I.C.E.) in 1990, I discussed the game’s history and basic mechanics. Due to various factors, I.C.E. ceased production of their original Silent Death – Metal Express game after the Night Brood expansion was released in 1992. Part 2 discusses what happened after that decision.

ICE took the bold move to reboot Silent Death rather than try and fix it through further expansions. In 1995 a new version, Silent Death: The Next Millennium (TNM), hit the shelves. By all accounts it was an immediate hit that saw a number of reprints over the next few years. The Deluxe Edition box set was impressive, including a huge rulebook that revised and expanded the original rules while providing the balance that the punters craved. It came with 48 plastic miniatures with revised ship designs as well as much of the same setup paraphernalia as the original game box.

On a personal level I found the whole reboot somewhat vexing. Having invested a lot in the original game, I was super upset that it and all it stood for had been swept aside. TNM had also become expensive beyond my reach. So for the next few years, apart from the occasional nostalgic game using the original rules, Silent Death took a back seat for me, until my finances improved and I discovered eBay some years later.

While ICE pursued a vigorous publication schedule, things were far different. The expansions they’d planned for the original game were revised and released in quick succession, while numerous additional supplements followed. Silent Death: The Next Millennium went from strength to strength. The last official expansion for their flagship science fiction RPG SpaceMaster was released in 1994, and Silent Death appears to have taken up the slack and continued to expand on what had come before. 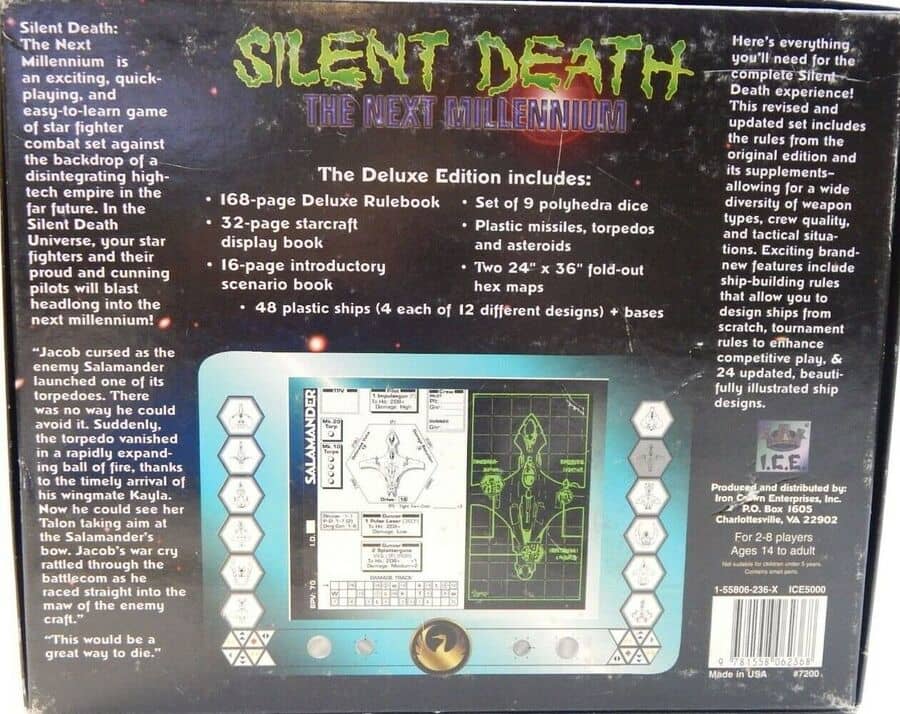 Silent Death: The Next Millennium Deluxe Edition (back cover)

A standalone rulebook was also released for TNM, which went some way to alleviate the financial burden on owners of the original set who wished to upgrade. ICE also release a slimmer and thus cheaper Rookie Rules book to entice new players.

The core rules came in a perfect bound 168-page book which provided revised space ship write ups and displays for all the ships in the original set. It also included: 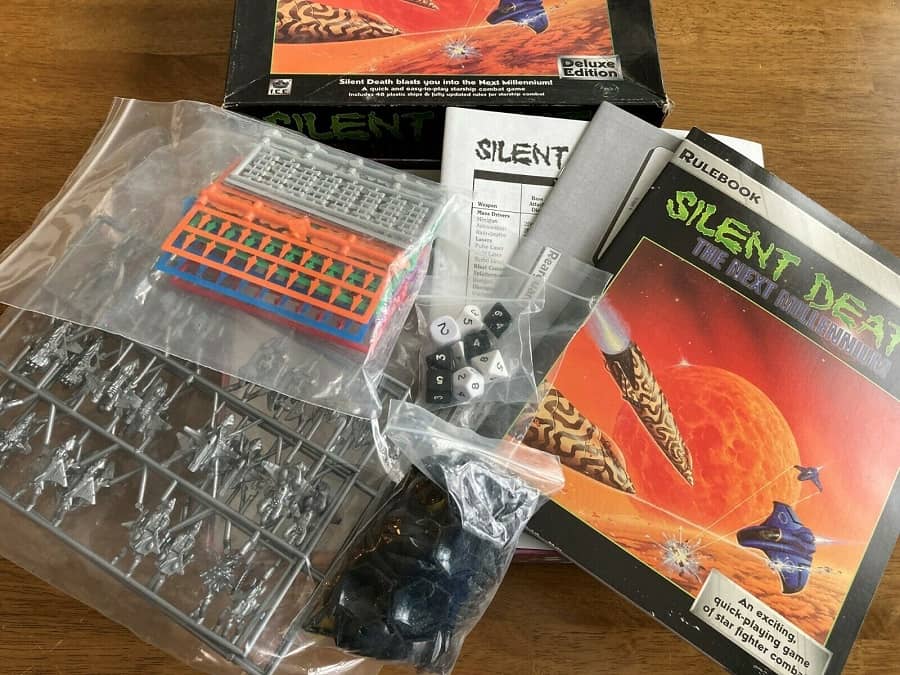 Box contents for Silent Death: The Next Millennium

One feature I particularly liked is a sidebar on each page that read like a short story, giving a personal account of a crew as they worked their way through various challenges, allowing one to visualize the rules. This endearing feature perpetuated through most of the supplements that followed.

What was nice about TNM is that ICE got the balance right. While the game play remained essentially unchanged in concept, ship costs were adjusted and players paid a premium for heavier fighters. In the unbalanced gameplay example I explored back in Part 1, for example, a Pit Viper now has a BPV of 12, while its arch nemesis, the Night Hawk, has a more respectable 47 BPV. 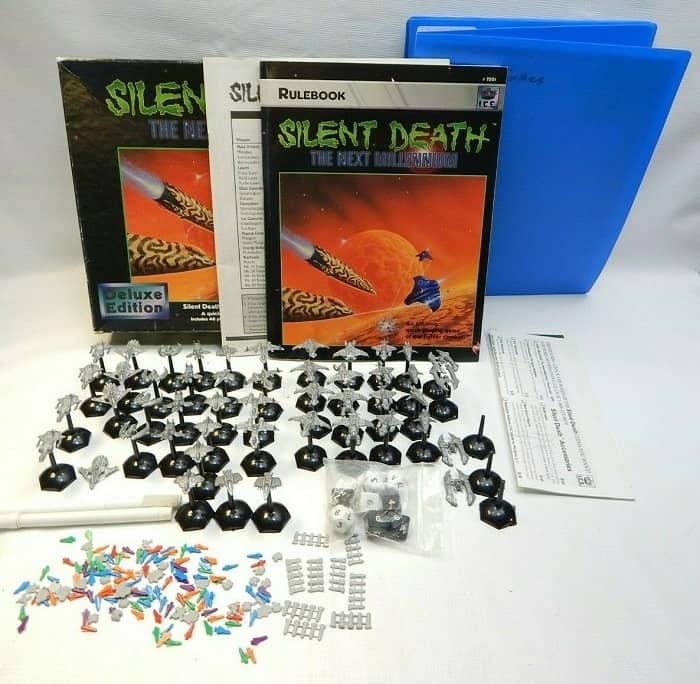 The Next Millennium (with mounted ships)

Another good example is the Betafortress gunboat. This main battle tank of any squadron was a mere 75 BPV in Black Guard, whereas its revised price in TNM is 216. TNM also went as far as to present two additional Betafortress variants, Alpha and Beta, which came in at 218 and 220 BPV respectively.

Supplements and expansions came out swiftly thereafter. Here’s a look at the catalog, in order of stock number. 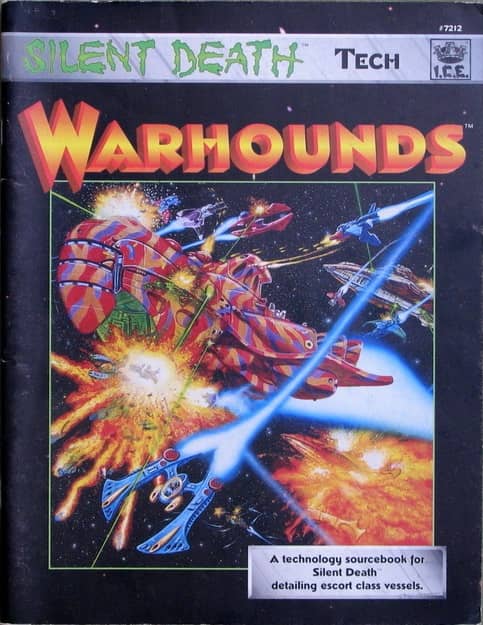 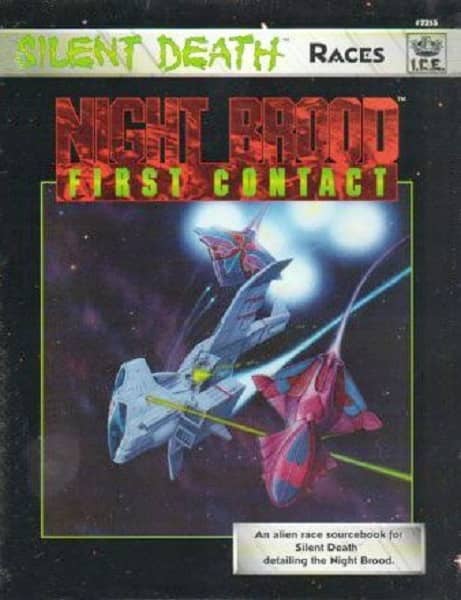 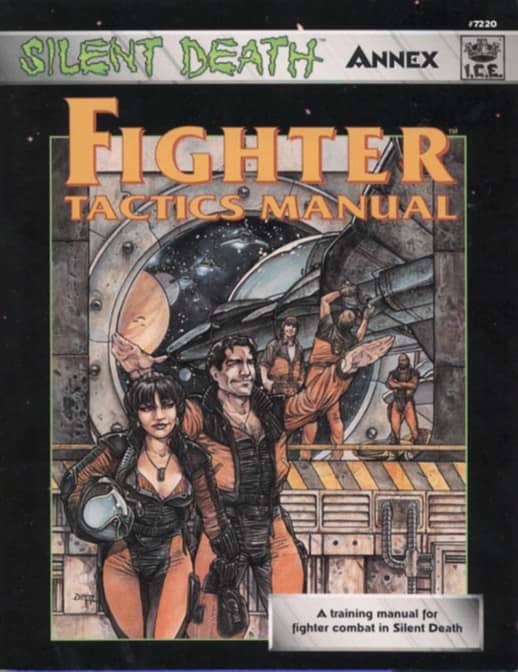 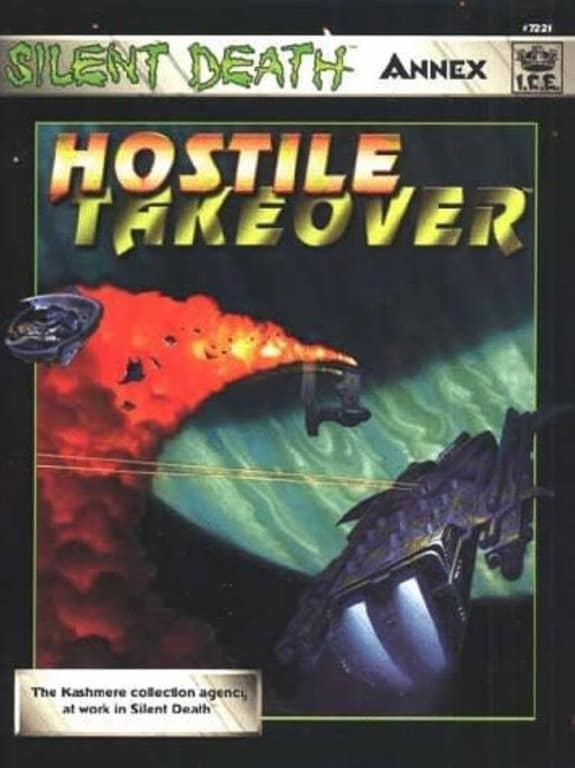 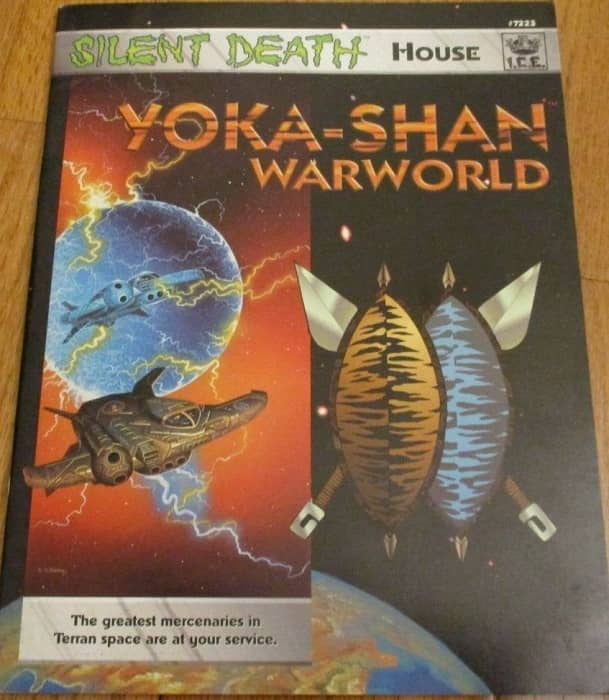 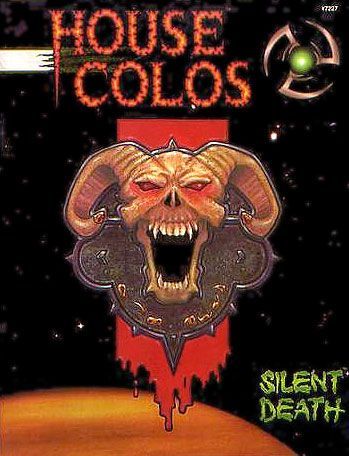 Sadly, House Colos was the last official Silent Death expansion released before ICE filed for bankruptcy in October 2000. Over and above these expansions, ICE did release a number of other supporting items such as plastic miniatures boxes (Wings of Death, Near Space Objects, Plastic Assortment Set), a bespoke huge battle map, ship builder software on 3.5” disk (later downloadable) and of course all the miniatures for ships described here, in blister packs. 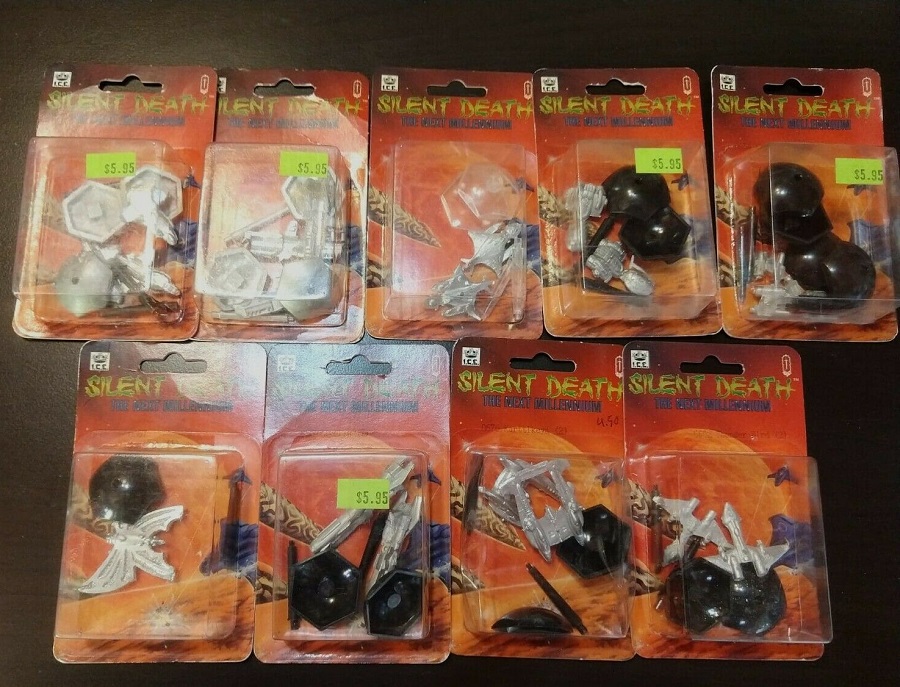 Assorted miniature packs for The Next Millennium

Several TNM items were marked as Combat Express, which is somewhat confusing. Was it a simple brand engineering exercise to differentiate TNM from the original Metal Express moniker, or was there some other meaning? Working from vague memory of teasers in mid-1990’s catalogs and release lists in the back pages of some manuals, ICE may have planned to expand into terrestrial miniatures gaming conversions (Steel Warriors, Space Rangers), although this remains mere speculation on my part.

ICE did a fantastic job with all their supplements. Well written and laid out with good cover and interior art, the items are as attractive today as when they were published. They were of a superior print quality that I can attest can stand up to multiple use, but from an editing standpoint were not all perfect, as a few had errors on space ship displays that should have been avoided.

It was sad when ICE ceased to be, but thankfully Silent Death has lived on, experiencing various changes in ownership. The game has not only continued to exist but has indeed expanded:

Silent Death remains alive and now lives at www.silent-death.mx where many extra miniatures are for sale, plus free downloadable campaign rules and additional refits. Download a copy of the rulebook and start your own battles.

You don’t even have to use the specific ships available, as it is possible come up with your own designs to suit your game needs. You want a crossover where a squadron of Original BSG Cylon Raiders take on a Federation ship, this is the system that will allow it to happen!

Tony Den is an occasional contributor at Black Gate. His coverage until now has concentrated on forgotten or overlooked book series, interspersed with the occasional classic Sci-Fi – often in Ace Double format – retro review. His website RuneQuest.orc has finally had all data moved to Word Press and awaits publication into a production version.