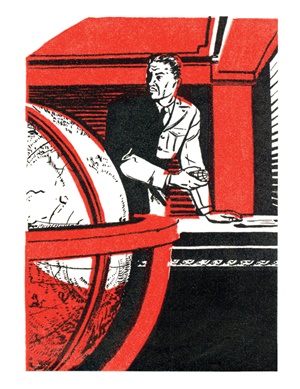 Welcome to another installment of 3 Reasons. With a goal of eventually tackling every tale of the Corpus, I’ll give three reasons why the particular story at hand is the best Nero Wolfe of them all. Since I’d be writing over seventy ‘Best Story’ essays, the point isn’t actually to pick one – just to point out some of what is good in every adventure featuring Wolfe and Archie. And I’ll toss in one reason it’s not the best story. Now – These essays will contain SPOILERS. You have been warned!

Today’s story is “Booby Trap,” from Not Quite Dead Enough. As in the title story, Archie is in the US Army, a major in uniform. He and Wolfe are assisting Military Intelligence in New York City. Archie had recovered some stolen experimental grenades, and Colonel Ryder let him keep one as a souvenir. Wolfe will not let it remain in his house, so Archie returns it to Ryder. Who is shortly thereafter, obliterated by said grenade. Wolfe and Archie solve two military murders and play a role in a third death.

I can’t immediately recall another story in which chapters end so strongly. In that regard, Stout was at his best in this one.

Chapter one ends with Wolfe telling a general, two colonels, a lieutenant, a major (Archie), and a US Congressman, that Colonel Cross had been murdered. The last line of the chapters sums it up well:

Wolfe wants nothing more, when he is out, than to return to the Brownstone. An explosion (we soon discover that the grenade Archie had returned went off, killing Colonel Ryder), however, ensures that Wolfe won’t be going anywhere in the immediate future. Chapter two ends as Wolfe leaves the floor where the explosion occurred, went straight into General Fife’s office and claimed his large, leather chair, instructing Archie to have some beer delivered. He’s hunkering in.

In chapter three, Wolfe tells Archie to retrieve a suitcase from Colonel Ryder’s office. Archie essentially tells him it would be easier to get the moon for Wolfe, and would he prefer that. Archie glibly works his way back into Military Intelligence HQ and into Ryder’s office; to discover that the suitcase is missing. End chapter.

Wolfe and Archie corner Sergeant Bruce in chapter four and she comes to the Brownstone. The chapter ends with her offering a bribe of millions of dollars to Wolfe.

In chapter five, Wolfe conclusively establishes how Colonel Ryder was murdered. It was a booby trap, using the grenade and the suitcase. The chapter ends with:

“It will be a busy day. We’re going to set a booby trap – somewhat more complicated than that one.”

In chapter six, the trap has been sprung and it’s obvious who the villain is. Wolfe informs the military personnel that it is out of their hands, and he is going to take the killer for a ride. Literally, as we learn. On to chapter seven.

Chapter seven is one of the most memorable in the entire Corpus. I’m not going to give it away. If you haven’t read the story, go do so. It’s worth it.

Everything is wrapped up and there’s much explanation at a dinner at Wolfe’s home, in chapter eight. An entertaining subplot involving Archie, is successfully concluded in the story’s final paragraphs, and so ends “Booby Trap.”

Shattuck is a US Congressman, and he’s present in the story almost from the beginning, to near the very end. And he’s a ‘large as life’ character for a novella. His role as Ryder’s friend, and godfather to his recently killed son; Deep voiced, public servant Congressman; Provider of the anonymous letter; Defender of Ryder’s character after he was dead; and murderer of Ryder. This is a robust character. He thinks he’s going to bluster his way past Wolfe in the final confrontation in Cortland Park. And the resignation as he carries out his final, defeated actions: Shattuck steals his scenes, all the way through the book.

He reminds me a bit of Con O’Malley from Murder by the Book.

THREE – The Female of the Species 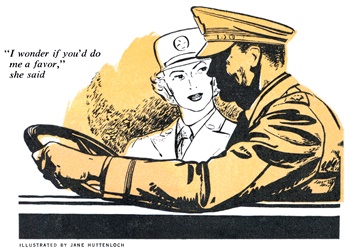 Misogynist – a person who dislikes, despises, or is strongly prejudiced against women. Wolfe, plain and simple, is a misogynist. His comments about women throughout the Corpus are denigrating, condescending, and imply a lack of respect for the gender.

Archie was walking on eggshells once when a, gasp, WOMAN, was part of the Brownstone’s rug cleaning crew. He tried to make sure that Wolfe didn’t even come across her.

In this story, Wolfe is confronted with a WAC: a member of the Women’s Army Corps. Upon seeing her, in uniform, sitting at a desk, typing, Wolfe demanded, “What in the name of heaven is this?”

Archie makes a crack, knowing that ‘what was eating him was the sight of a female, in uniform, in that job.’

Wolfe refers to her with, “By the way, what about that woman in his anteroom? That female in uniform.”

Not exactly dripping with admiration. But that’s nothing compared to what follows when she comes in to be interviewed.

“Sit down,” Wolfe told her. “Archie, if you’ll move that chair around? Excuse me, General, if I violate regulations, a major waiting on a sergeant, but I find it impossible to regard a woman as a soldier and don’t intend to try.”

Wolfe tells General Carpenter that sending out the letters was close to a streak of genius. Carpenter tells him it was Bruce’s idea. Wolfe grudgingly says that “She appears to have some intelligence.”

But for attempting to bribe him, he calls her a ‘jenny ass’ and says that she has a streak of imbecility. General Carpenter then tells Wolfe it was his idea. It’s like watching Wolfe try to spin plates, refusing to acknowledge how good she really is as an intelligence operative.

I think that Sergeant Bruce is a really good character, from her exchanges with Archie, to her uncertain role as the story progresses.

Read The Rubber Band for another example of a female (Clara Fox) who Wolfe seems to admire somewhat, but is still inappropriately rude to. He can’t think well of the species, except for limited purposes.

Cramer refers to Wolfe’s gatherings at the end of the case, where he exposes the villain, as ‘charades.’ This one feels awfully thin. First, there’s a non-absorbing sequence with, one by one, potential suspects being left alone in the office, while Archie watches through the secret panel. Then they’re all brought back into the office together.

Wolfe reveals that Sergeant Bruce had betrayed herself during her time in the office and fled, ‘proving’ that she is the killer.

At Wolfe’s insistence, Archie searches his desk, then Wolfe’s for a missing letter, supposedly from General Carpenter. Wolfe then tells Archie it’s in the suitcase on Archie’s desk. Archie goes to open it and Congressman John Bell Shattuck is visibly falling apart. Wolfe has made Shattuck think that Sergeant Bruce had set a booby trap in the office, just like the one the Congressman had used to kill Colonel Ryder the day before. That’s it. Now, I think that Stout more than makes up for this by having Wolfe and Archie ‘take him for a ride’ to the park. But as charades go, it’s not one of the best.

General Fife and Colonel Rider play prominent roles in this story, and both are mentioned in “Not Quite Dead Enough.” Colonel Cross is mentioned but not seen in both stories. We learn that Archie didn’t solve Cross’ (according to Wolfe) murder, but he did find the experimental grenades that Cross was hunting down.

Archie – “I’ve got something in my eye.”

I thought, ‘Good lord, where’s she been all these years, falling for that old gag.’ I bent over to stare into her eyes, not ten inches away. And she stared back into mine.

She sat down again and went on typing, completely deadpan. 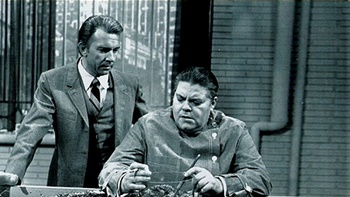 He and Fritz accomplished wonders within the limitations of coupon fodder, and right there in the middle of New York, with black markets tipping the wink like floozies out for breath of fresh air on a summer evening, Wolfe’s kitchen was as pure as cottage cheese.

(Archie is returning an experimental grenade which Colonel Ryder had given him).

Archie – “I know, but I have no place to keep it except my room at Mr. Wolfe’s house, and that won’t do. I caught him tinkering with it last night. I’m afraid he’ll hurt himself.”

Everybody looked at Wolfe. He said testily,

Wolfe – “You know Major Goodwin, don’t you? I wouldn’t touch the thing…”

(Colonel Tinkham makes a bunch of observations about the anonymous letter that was received, reminiscent of a Sherlock Holmes’ analysis)

Wolfe – I suggest, if the discussion is to be at kindergarten level, that we all sit on the floor.