But I was especially intrigued by his lengthy review of Robert Hoskins’ 1970 sword & sorcery anthology Swords Against Tomorrow, a long-forgotten volume that contained five long stories by Poul Anderson, Fritz Leiber, Lin Carter, John Jakes, and Leigh Brackett, including a pair of reprints from Planet Stories and an original novelette from Lin Carter. All but one are reprints — including a standalone novella by Anderson, a Fafhrd and the Gray Mouser adventure, a Brak the Barbarian story, and a tale in Brackett’s famous Venus series.

This is a fine little paperback that introduced readers to some of the most popular heroic fantasy series of the era in the early 70s, and I certainly didn’t expect to see it featured so prominently at the premier genre site over half a century after it was published. 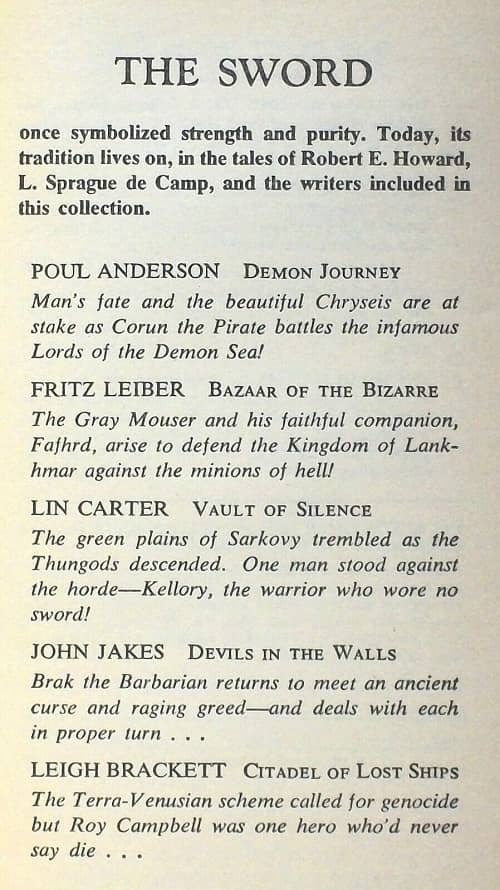 Robert Hoskins was a fairly well-known SF writer, and the 70s were far and away his most productive period. Between 1972-79 he published a popular trilogy (Master of the Stars, To Control the Stars, and To Escape the Stars) and over half a dozen other novels.

But he was better known as an anthologist, with two popular SF anthology series: Infinity (five volumes between 1970-73) and Wondermakers (two volumes in 1972 & ’74; we covered them both here), and no less than ten additional SF anthologies published between 1969-79.

Hoskin’s anthologies included five loosely similar Tomorrow paperbacks, one of which (Tomorrow 1) was clearly intended to kick off a series:

Maybe Hoskins just liked anthologies with the words Tomorrow and Against Tomorrow in the title? I don’t know, but I enjoyed them. Alan Brown clearly enjoyed Swords Against Tomorrow; here’s a snippet from his lengthy review at Tor.com.

I ran across an old anthology from 1970 with a cover blurb promising “Heroic Tales told by Lin Carter, Fritz Leiber, John Jakes, Leigh Brackett, and a novella by Poul Anderson.” Just those names alone were enough to draw me in… The collection turned out to be well worth my time and full of fun adventure stories, even though only three out of the five stories actually feature heroes who wield swords!…

The longest story in the book, “Demon Journey” by Poul Anderson, comes first. It was originally published as “Witch of the Demon Seas” under the pseudonym A.A. Craig, in the magazine Planet Stories. The story takes place on a cloudy planet with plentiful seas, which might or might not be Venus. The captured hero is Corun, a captive of Khroman, ruler of Achaera. In his cell, Corun is approached by the sorcerer Shorzon and his witch daughter Chryseis, who has a dragonish pet called an ‘erinye.’ They know that Corun is one of the only people to visit the Xanthi, or Sea Demons, and returned to tell the tale. If he will lead them to the Sea Demons, they will give him his freedom…. The story follows the Planet Stories template closely, but Anderson’s skill is apparent, and he delivers a taut little action-packed tale…

The final story is an example of Leigh Brackett at her best: “Citadel of Lost Ships…”  A hardened criminal, Roy Campbell, who escaped from the solar system’s Patrol, has crash-landed among a native tribe on Venus, the Kraylens. They have not only helped to heal his body, they’ve healed his soul, and for the first time in his life he has found peace. When the authorities of the Coalition decide to take the Kraylen’s land, instead of accepting relocation into camps and cities, they decide to fight… Soon, Campbell is swept up in an effort not only to rescue the Kraylens, but also to preserve this last bastion of freedom in the solar system… This story alone was well worth the book’s price of admission, and I recently discovered you can now read it for free at Project Gutenberg…

This book is a quirky little collection… a group of well-told tales that were perfect for reading on a sunny summer afternoon. They were all enjoyable, with the standout being the Brackett tale, which I urge you all to take a few moments to read… this story is a stellar example of pulp fiction at its finest.

Swords Against Tomorrow was a paperback original published by Signet /New American Library in August 1970. It is 176 pages, priced at $0.75. The cover is by Gene Szafran. It has never been reprinted, and there is no digital edition.

See all our recent coverage of classic SF & fantasy here.

i wish everything like these (old novels, out of print and anthologies) would be collected and made available in ebook form. it must be hard or just not deemed worth it for a company to buy or get ahold of the rights and put them out.

i know it’s great to collect the old books too, but with my eyes getting worse and worse, an ebook is much easier to read and change font sizes.

Yeah, I’d also love to get all of these old anthologies (Carter’s Flashing Swords, McCauley’s Dark Forces, Offutt’s Swords Against Darkness, the ones edited by Robert Adams, etc.) into eBook format, but I’m sure the rights situation would be an impossible tangle.

I’m helping to put together a potential hard boiled anthology, and right out of the gate, Hammett and Erle Stanley Gardner were off the list. Too hard to get permission from the estates.

I’ve heard that the estate of John D. MacDonald (my favorite writer) isn’t very interested in new collections of his short stories.

With so many of the sword and sorcery authors gone now, dealing with estates and rights holders would make it tougher.

Though, it’s cool that S&S books by authors like John Jakes and Gardner Fox are in ebook format.

Hoskins also edited “The Liberated Future: Voyages into Tomorrow” (Fawcett Crest, 1974). I believe the stories are all originals.

I was too young to appreciate what a great time the late 60’s and 70’s were for Sword and Sorcery. I did catch the bug in the late 70’s.

I would love to go to a store and see a book like this in the spinner rack.

John, you posted a few articles about publisher house branding. The cover of the two Signet books are similar even though they are by different artists. They both look to be watercolor by I’m probably wrong.

> i wish everything like these (old novels, out of print and anthologies) would be
> collected and made available in ebook form. it must be hard or just not deemed
> worth it for a company to buy or get ahold of the rights and put them out.

I definitely agree! The problem is rights, of course. The publisher (Signet/New American Library) was absorbed by Penguin in 1987, and in 2015 switched to publishing only non-fiction. So it presumably has no interest in digital versions.

That means someone else would have to do the hard work of tracking down the rights. Robert Hoskins died almost 30 years ago (in 1993), so that might be tricky.

I’d love to see Hoskins’ many fine anthologies reprinted in digital format, but it’s not likely to have much commercial appeal. It would have to be done by a dedicated fan. Until that happens, we’ll have to content ourselves with the original paperbacks.

> Yeah, I’d also love to get all of these old anthologies (Carter’s Flashing Swords,
> McCauley’s Dark Forces, Offutt’s Swords Against Darkness, the ones edited by Robert Adams,
> etc.) into eBook format, but I’m sure the rights situation would be an impossible tangle.

I was sure you had to be wrong about FLASHING SWORDS not being available in ebook — but I just checked and you are absolutely correct. All volumes of that groundbreaking series have been out of print since the early 80s.

The situation is even worse for Offutt’s SWORDS AGAINST DARKNESS, which have never been reprinted in any format, not even the SFBC hardcover editions FLASHING SWORDS enjoyed.

I guess we’ll have to content ourselves with the (fortunately still inexpensive) paperback originals for now. At least they’re still widely available. But yeah, those books definitely deserve to be reprinted.

What we need is a Lin Carter for the digital age.

> With so many of the sword and sorcery authors gone now, dealing with estates and rights holders would make it tougher.

I think it depends. If the rights situation is clear, sometimes it can be very easy to get reprint rights.

I never had a problem getting rights for any of the reprints I wanted to put in the print edition of BLACK GATE for example. We reprinted stories by Edmond Hamilton, Karl Edward Wagner, Murray Leinster, Charles Tanner, and others. I don’t think I ever paid more than $200 for a reprint.

Obviously, bestselling writers like Hammett and MacDonald are a totally different story. I was mostly dealing with midlist writers.

> Hoskins also edited “The Liberated Future: Voyages into Tomorrow”
> (Fawcett Crest, 1974). I believe the stories are all originals.

You’re absolutely right, sir! Not sure how I missed that one. (Although according to ISFDB, the stories are all reprints.)

I will edit my list above to include it. 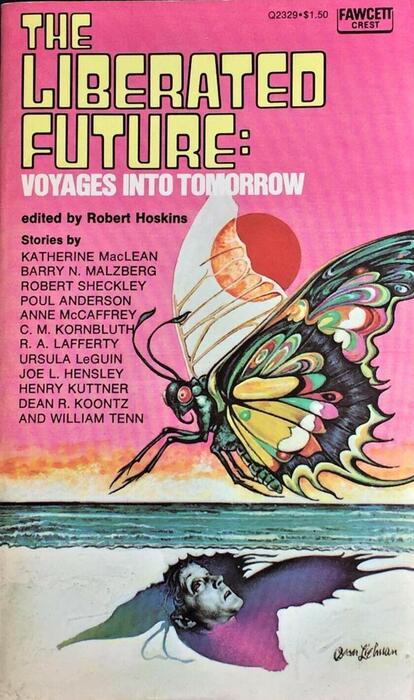 > I would love to go to a store and see a book like this in the spinner rack.

Me too. I dearly miss the age of the mass market paperback anthology.

They still exist, though they’re rare these days. The last one I can recall is STAR DESTROYERS, edited by Christopher Ruocchio and‎ Tony Daniel and reprinted in mass market paperback last year by Baen:

> John, you posted a few articles about publisher house branding. The cover of the
> two Signet books are similar even though they are by different artists. They both
> look to be watercolor [but] I’m probably wrong.

That’s an interesting angle — looking at how publishers used cover art to establish a uniform visual brand for their anthologies. But I think in this case the two dark covers are likely just coincidence.

> What we need is a Lin Carter for the digital age.

Any nominees? The Vendermeers are keeping a lot of folks in print in their massive BIG BOOK OF CLASSIC FANTASY and BIG BOOK OF MODERN FANTASY, et al, but even they don’t come close to Carter’s output.

>Any nominees? I nominate John ONeill

> What we need is a Lin Carter for the digital age.

I think D. M. Ritzlin of DMR books fulfills that role. I just finished the anthology Renegade Swords and I think Lin Carter would approve especially since it includes two of Lin’s stories.

If you like heroic fiction check out DMR books.

>(Although according to ISFDB, the stories are all reprints.)…

You’re right, John. I should’ve checked with ISFDB first. I think it was the “A Fawcett Crest Original” that threw me.

Thanks! I appreciate that. I’ve got a run of cool reprints coming up. Manly Wade Wellman’s final novel Cahena came out today, and more will be announced soon.

By the way, for those who want to read Poul Anderson’s story “Demon Journey” from Swords Against Tomorrow, I reprinted it in the collection Swordsmen from the Stars.