1973 was the fifth year of the Ditmars, awarded in Australia. I have already covered the Ditmars for International Fiction (The Gods Themselves) and for Australian Fanzine (Bruce Gillespie’s SF Commentary.)

The Award for Best Australian Fiction went, curiously, to a short story, “Let It Ring”, by “John Ossian”. “John Ossian” was a pseudonym for the very well-known Australian fan and critic, John Foyster. The other nominees were all novels: Budnip, by Jack Wodhams; Gone Fishing, by David Rome; and The Hard Way Up, by A. Bertram Chandler. I haven’t read the Wodhams or Rome novel, and I read The Hard Way Up a long time ago – it’s a Grimes novel, and my impression is that it’s much like many Grimes novels, enjoyable enough but not special. So, I was willing to allow that perhaps “Let It Ring” was such a good short story that it would naturally beat out three likely enjoyable but not really brilliant novels.

Foyster, I should add, won three Ditmars – this one, and awards for Best Fanzine in 1970 for The Journal of Omphalistic Epistemology and in 1979 for Chunder. He also won the A. Bertram Chandler Memorial Award for Outstanding Achievement in Australian SF in 2002. He was born in 1941, and died just short of his 62nd birthday in 2003. He and Bruce Gillespie occasionally collaborated on their fanzines SF Commentary and The Journal of Omphalistic Epistemology, but never in a year that either fanzine won a Ditmar.

I found a copy of Infinity Three, edited by Robert Hoskins, wherein the story appeared. I read “Let It Ring”, and I was completely puzzled. I had very little idea what was going on. There are nods to Cordwainer Smith, and his novel Norstrilia (then known by its two halves, The Underpeople and The Planet Buyer.) The action, such as it is, seems to concern a man trying to influence his fellows on the planet Strine, especially Mathers and Kenner, to help him either delay or prevent the entrance of Strine into the Federation. It’s really not very interesting, and it’s presented in a confusing fashion.

I asked a group of people with knowledge of that period in Australian SF, including Bruce Gillespie and Damien Broderick (who anthologized “Let It Ring” in The Zeitgeist Machine: A New Anthology of Australian Science Fiction in 1977.) And they were very helpful. 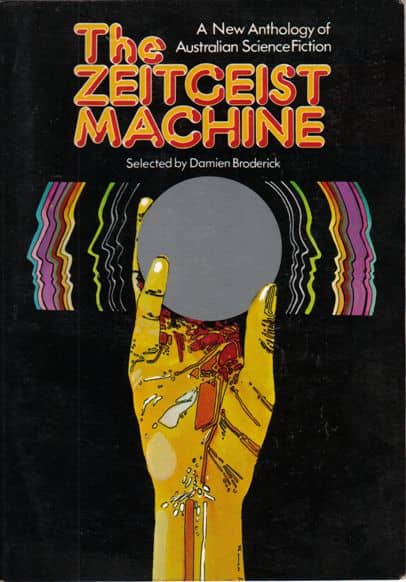 The first response was from Barry Malzberg, who knew Robert Hoskins well. He wrote, and I quote in full because it’s all wonderful:

Robt. Hoskins, (1933-1993), my colleague at Scott Meredith Literary Agency, later my editor at Lancer (he took on three early novels, one of which may stand next to Underlay/Avon/George Ernsberger as my own guilty pleasure) acquired this story for Infinity Three in which I also had a story to say nothing of Robert Silverberg, and other worthies such as Simak, Koontz, Goulart and he talked to me about “Let It Ring” which had been submitted pseudonymously.  Head spinning, he wrote the author asking what the hell this was. A wild put-on/parody of the New Wave, Foyster responded (under his own name). “Wanted to see if I could get something this crappy through.” Hoskins, who was not lacking a sense of humor, published it stet.  Won a Ditmar as has been noted. Those were the days, my friends.  I thought they’d never end.

John Foyster’s story was that Robert Hoskins wrote to him asking if there was anything he could do to help Australia’s bid to hold the World Convention in Melbourne in 1975. John’s answer was to write his only published piece of fiction, ‘Let It Ring’, as by John Ossian, as a tribute to Cordwainer Smith. Because of his links to Australia (visits to Australia by Paul Linebarger — Cordwainer Smith — led to the invention of Norstrilia (‘Old North Australia’, which become Norstrilia if you say it fast enough in Strine (Australian)) Cordwainer Smith has become a sort of patron saint of Australian fandom and SF activity, at least during the seventies and eighties.

Anyway, Hoskins accepted the story and published it. As has usually been the case, it doesn’t take a lot of votes to get any item nominated for the Ditmar Award category of Best Australian Fiction. Those in on the joke nominated it, but I doubt if anybody expected ‘Let It Ring’ to win, especially over three novels.

Damien Broderick (who anthologized the story, as noted above) offered a compelling explication of the story’s mysteries:

But the central device is obviously the narrator attempting to manipulate American fandom to reject bids by Australia to hold the World SF Convention there in the early ’70s. This blends into a sort of whimsical debate among the Lords of the Instrumentality, although in this case apparently Strine (Norstrilia) is the beggar at the gates, hardly the rulers of the Galaxy. All this equivalence of Worldcon and Welkin (which latter, as it happens, denotes  the limitless heavens above) is strengthened by the mention of the first non-Federation Welkin in Tornto. Toronto in our history was indeed the first locale outside the US to host a Worldcon (in 1948). And so on.

The names are drawn from sercon Aussie sf practitioners of some local notability: the Blessed Father Damien, of course, and elderly (George) Turner, and probably others I’m less sure of: “L” might be Lee Harding, a close skiffy friend of Foyster’s. Kenners and Mathers? The former might be Jeff Kennett, a reactionary politician; I assume Mathers is Race Mathews, a notable leftish politician in Oz and one of the founding figures of the Melbourne SF Club.

So – that’s the story, I think, and I believe it. John Foyster wrote (by some accounts, with help from others) a parodic story, riffing on Cordwainer Smith’s most Australian work, and also satirizing the excesses of the New Wave. At the same time, the story cleverly reframes the then current attempt to get a Worldcon in Australia. It got published, got nominated for a Ditmar, and enough Aussie fans knew what was going on to vote it a Ditmar, either as a joke, or taken by its cleverness, or in support of the Worldcon bid.

Note the pseudonym: “John Ossian.” Ossian was the name of the supposed author of The Works of Ossian, published in 1760 through 1765 by the Scottish writer James MacPherson. MacPherson claimed these were translations of ancient Scottish Gaelic texts he had discovered, though, curiously, the stories were based on Irish mythology. Eventually these were exposed as frauds, and they remain among the most famous literary frauds. So Foyster’s choice of pseudonym is a clear nod at the parodic nature of the story.

Finally, I should mention that the ultimate goal of this story (and of another Ditmar winner this year, to be covered soon!), that is, that Melbourne be awarded the 1975 Worldcon, was achieved.

And one last thing – I am told that John Foyster published a two page explanation of his story in 1973 or so, either as a separate one sheet “fanzine,” or an addition to another fanzine, or as part of an APA. I have not been able to find a copy of that, nor find anyone who knows the contents of it. If anyone does know more, I’d be delighted to hear it!

Rich Horton’s last article for us was “An Apology to Jaym Gates,” by Harlan Ellison. His website is Strange at Ecbatan. See all of Rich’s Black Gate articles here.