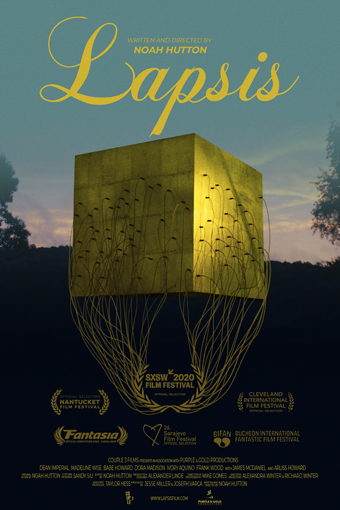 Science fiction has strong historical links to the adventure genre, but ideas-oriented science fiction tends to move away from adventure. Adventure fiction typically focusses on individual protagonists doing world-altering things, and a science fiction backdrop makes for a fictional world susceptible to alteration. But much actual social change is driven by organisations and groups, and science fiction that wants to talk about ideas usually acknowledges that. At the extreme you get something like Asimov’s early Foundation stories: tales in which the inevitable working-out of sociological forces are at the centre of the story, not the actions of a single hero. It’s not impossible to balance a quest-story about a single protagonist with a realistic portrayal of a world defined by its social structures, but tales that pull off both aspects are worth noting.

Which brings me to writer-director Noah Hutton’s Lapsis, an excellent near-future science fiction film that does both things very well indeed. Not too long from now, the quantum internet connects the world. To make the quantum computing systems work, cablers need to connect long cables between large cube-shaped nodes. These nodes are built in wilderness areas, so cablers have to walk through the woods trailing a wire behind them. They get paid well for this, in gig-economy fashion: if you have a cabler medallion, you log into an account, select a path, and take your cable along the path. You have to hurry to get the cable laid before a bot passes you by and steals the route, though, for if that happens you don’t get the points that’ll give you your payout.

Ray (Dean Imperial) is a blue-collar deliveryman whose boss gets busted, necessitating a search for a new job. Ray’s got a brother, Jaimie (Babe Howard) who he loves dearly but who suffers from a terrible fatigue-related condition, and to pay for an experimental treatment Ray strikes a deal with an underworld connection to get an under-the-counter cabling medallion. Cabling’s harder work than Ray expected, but things get really weird when he logs in to the account associated with the medallion — and finds a hoard of points already there. And finds other cablers grow hostile at the mention of his account’s name. Ray’s got to solve the mystery of the account, support his brother’s treatment, stay out of jail, and succeed at laying cable through a forest filled with people who seem to get stranger the farther he goes.

This is an excellent set-up, and Hutton explores it with profound intelligence and creativity. He has a background in documentary film, including two films about the oil industry and an ongoing project about an attempt to build a computerised simulation of a human brain; this perhaps helped him develop a future world that feels so deeply real. Lapsis is a thorough and solid extrapolation of the modern world, not just in terms of the macro scale of the class system and the gig economy, but in smaller stuff like the cheerful interface for the cablers’ accounts. Or the way the sharing economy has expanded to the point people rent storage space in their garage.

But of course the film really lives because the characters do. Ray’s an excellent choice of protagonist, a relatively poorly-educated man to whom quantum computing is a strange thing he never bothered with even though it’s transforming the world around him. Caught up in events the way we all are, he has to have stuff explained to him, and we get to understand that stuff as he does. His relationship with his brother is also a lovely thing to see, full of love and tenderness, and it’s strong enough to carry the film and make us believe in what Ray’s prepared to do for Jamie.

More generally, there’s a precision to the dialogue that supports both character and ideas. The background of the characters shape their feelings and perceptions and choice of words, shapes their political awareness and understanding of their situations, and shapes their interactions with other people with other understandings. Which is to say that the dialogue’s naturalistic but also speaks directly to the themes of the film and gets across the science-fictional ideas in understated ways.

The acting’s excellent, especially Dean Imperial, who inhabits Ray with absolute realism. You understand the man, both his rough edges and his kindness. There are hints of violence around him and the people he deals with, but this is not a violent movie, and one of the lovely things about Imperial’s performance is that it keeps that subtext present without letting it deform the film.

Narratively, the plot looks like it’ll be centred around Ray’s walks through the woods, which regularly lead him to surprising and surreal things. And to a large extent it is. But there turns out to be more beyond that; the scope of the world feels true. The journeys in the woods become ways by which Ray comes to understand the world he lives in, seeing a radically different side of it. And then he applies that knowledge outside the woods.

Which he is able to do because the movie understands the balance that must exist between the journey of a single protagonist and the importance of collective action. There’s a level in which the story of the film, when all’s said and done, is about a person bringing information to a collective, which leads to a positive change in the world. There is some coincidence in this — it’s perhaps a bit fortunate that he meets another character who’s a vital source of exposition — but the point is that there are things Ray can do and then there are things he can’t do alone, and the movie’s sharp about which is which and where his story ends.

It is also sharp in its presentation of how much remains to be done. There’s always more corruption, not so much of individuals but of systems. The powers of the world must always be struggled with, and the last shots of the film make that clear. This is especially true when those powers-that-be try to establish a world of pure exploitation. Individuals struggle with the structure of the world on many levels: the need to earn a living, the need for medical care, the need to tell the truth about the way the world’s run. Lapsis is a story of a small victory, but one that’s powerful to watch. It’s a film that never does quite what you expect, always a little more inventive and a little wiser.