Avram Davidson was one of the most respected fantasy short stories authors in America during my formative years as a reader. He was nominated for the Nebula Award ten times, the World Fantasy Award nine times, and won a Hugo for his classic story “Or All the Seas with Oysters.” That’s some serious street cred right there.

He’s not well remembered today, though. Criminally, we haven’t paid much attention to him at Black Gate either (aside from a Birthday Review by Steven Silver), and that’s a serious oversight. I found his third collection, Strange Seas and Shores buried in a collection I purchased recently, and want to settle in with it this weekend. I also found this compact review at the PorPor Books Blog; here’s a taste.

In his Introduction to Strange, Ray Bradbury notes that Davidson (1923 – 1993) crafted his short stories in the mode of the renowned Saki, O. Henry, and Chesterton. That is to say, Davidson employed surprise or trick endings in his short fiction, preferring to withhold the background detail of his plots at the outset, letting these details unfold along with the narrative, with the revelation / punch line coming in the last paragraph or sentence.

Many of the entries in Strange Seas and Shores are five or fewer pages in length, so providing synopses of these tales is essentially the same thing as disclosing spoilers… Some tales use quirky or satiric humor for their revelations… Others take a grimmer tone… Some of these stories have a ‘New York City’ sensibility to them, Davidson’s home throughout most of his life. In this manner they represent a sort of alternate approach to John Cheever’s examinations of NYC life in the postwar period.

It’s interesting to observe that Davidson steadfastly adhered to the classical, or traditionalist, format for his short fiction, even as the New Wave movement overtook sf publishing. His writing is clear and unambiguous, devoid of stylish affectations, although this being Davidson, readers will need to prepare for an expanded vocabulary: ‘circumambulation’, ‘nostra’, and ‘ratiocination’, among others…. Strange Seas and Shores is dedicated reading for Davidson aficionados; those others, who appreciate short stories in the ‘classical’ mode, may also want to seek it out.

Want to know another thing I discovered about Strange Seas and Shores this weekend? It is not the same book as his 1965 collection, What Strange Stars and Skies. For the last 40 years I’ve gotten these two titles confused. Glad to get that cleared up.

Here’s the complete Table of Contents for Strange Seas and Shores.

But he’s best remembered for his short story collections, including Or All the Seas with Oysters (1962), The Best of Avram Davidson (1979), The Avram Davidson Treasury (1998), and The Other Nineteenth Century (2001).

Strange Seas and Shores was published in hardcover by Doubleday in 1971, and reprinted in paperback by Ace Books a decade later, in August 1981. The paperback is 219 pages, priced at $2.25. The cover is uncredited.

One of my very favorites. There’s no now-obscure sf/fantasy writer that’s more deserving of rediscovery and celebration.

Yet another author I really need to read one of these years.

The short, sharp, witty sf novels that Davidson wrote in the 60’s – Mutiny in Space, Rork, The Enemy of My Enemy, Masters of the Maze – are a great introduction to him. 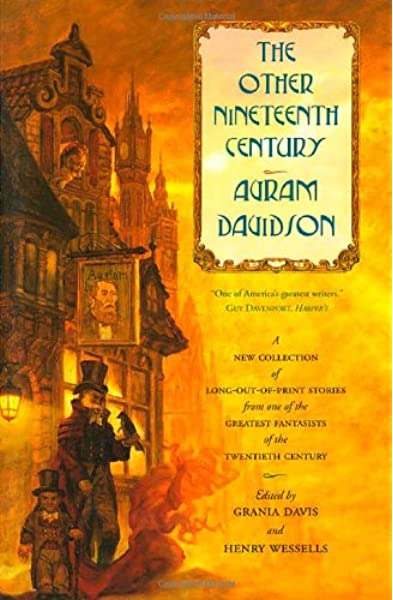 That’s probably the Davidson collection that’s recommended to me most often. Rich Horton has a fine review at his blog Strange at Ecbatan; here’s a snippet:

“What Strange Stars and Skies” has been a favorite of mine for a long time — telling of a Dame Philippa, who does charity work in the slums of London, and when ministering to the poor near a sailor’s house, encounters a very curious press gang. The last line is wonderful.

I first encountered “The Man Who Saw the Elephant” in this book, and it delighted and moved me — it’s about a Quaker couple, the wife hardworking and only just tolerant of her husband’s dreams … one of which is to see the elephant that a traveling showman advertises. In the end, the husband does get to see … well, if not an elephant something quite wonderful anyway, it seems to me.”

Two other Davidsons are well worth seeking out – The Avram Davidson Treasury and The Adventures of Doctor Eszterhazy. There’s actually one copy of Adventures available on Amazon – a beautiful new Owlswick hardback, just like the one I bought (so Amazon tells me) eighteen years ago.

> There’s actually one copy of Adventures available on Amazon – a beautiful new
> Owlswick hardback, just like the one I bought (so Amazon tells me) eighteen years ago.

Thomas — not any more. I just bought it. Thanks for the tip!