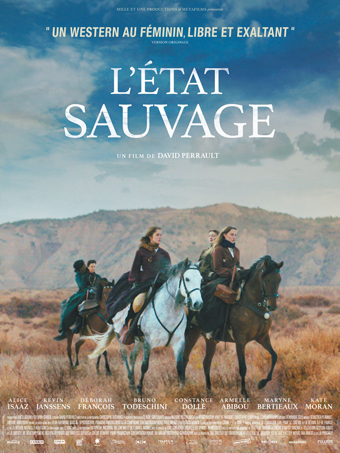 The Western’s an American genre in origin, but Europeans from Sergio Leone to Charlier and Moebius have done interesting work in the form. Usually, though, European Westerns follow American heroes. That is, the European creators are still telling American stories. Savage State (L’État Sauvage), a Western from French writer/director David Perrault, does something different, following a French family trying to get out of the American South during the Civil War. It’s a nice idea. Unfortunately, the execution’s lacking.

The movie starts in Missouri in 1863. After a brush with occupying Union soldiers turns violent, a wealthy French family decides to flee the American Civil War and return to France. Patriarch Edmond (Bruno Todeschini) hires a gunslinger named Victor (Kevin Janssens) to accompany him, his wife Madeleine (Constance Dollé), his three daughters, and their free Black servant Layla (Armelle Abibou) who is also Edmond’s lover. They set out for the coast accompanied by a couple other family retainers, but a woman from Victor’s past (Kate Moran) who leads a gang of bandits threatens to bring ruin on them all.

Let’s start with the good: the movie looks spectacular. There’s a long tradition in Western films of stunning landscape cinematography, and we get that here. The first act, largely taking place in aristocratic interiors, is less interesting; but the journey through the wilderness, lush in a way that Westerns usually aren’t, presents one sumptuous location after another. Mountain scenes give us sublime vistas. Deep green forests yield to snow as the journey progresses. It’s a nice picture to look at.

But if that’s the good, all the rest is the bad and the ugly. In particular, the story is at best thin and unconvincing. At worst, it’s a misfire. Nothing builds in any logical way or develops coherently. Character remains underdeveloped. Choices are baffling.

The idea here should be simple: fill the journey that is the spine of the film with thematically-resonant incidents that say something about character. This doesn’t happen. In fact the journey takes a while to get started — as noted, the whole first act — and then doesn’t end either in France or at an American port city, but in a ghost town in a mountain valley. So the movie starts late and ends early. 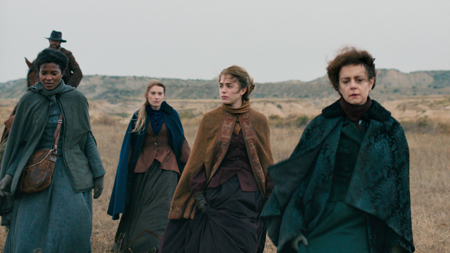 And it doesn’t think about how we perceive the characters. As it opens the (White) French family are living in a slave state as a part of the community. Which is to say the audience is expected to empathise with people who cheerfully take part in a society based directly on race-based chattel slavery. You could overcome that, with careful writing — audiences are after all routinely expected to empathise with unlikeable characters — and you could certainly examine the characters and their society critically. But the writing is neither careful nor critical.

There’s a naive acceptance of the family, in fact, and while a few gestures are made toward some kind of indictment of their society, that mostly emerges as an awareness of gender and the limited possibilities typically allowed young women. That’s not a bad thing, but Layla’s story remains underdeveloped compared to the three daughters of the family; and the only other Black person I noticed in the movie is another servant who weeps over his mistress’ corpse. This is a picture of Southern society so false as to utterly undermine the story.

Theoretically the narrative’s held together by romantic tensions, especially that between Victor and Edmond’s daughter Esther (Alice Isaaz). In practice this doesn’t work; there’s no chemistry between the actors, the dialogue’s clumsy, and given the age and experience difference between Victor and Esther you watch hoping nothing does develop between them. The outlaw from Edmond’s past, Bettie, is more interesting — but not explored in any depth, and the interactions between her and her men are not the kind of interactions you believe could exist between a chief and her gang. In any event, Bettie feels external to the story, something stuck into the film to make the journey more challenging, instead of a necessary and inevitable obstacle. 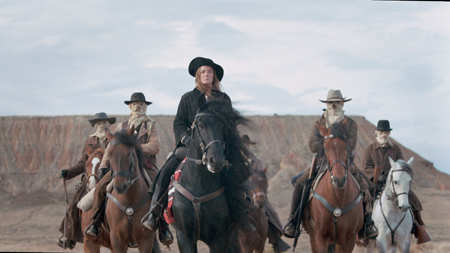 Tension therefore remains slack, and the final shoot-out doesn’t do much to redeem things. It’s the sort of ending you know is a climax because things explode, not because character tensions come to a head. Many of those tensions never do develop meaningfully; in particular, an exchange one of the characters has with Madeleine suggests her religious faith is meant to be prominent in a way it never becomes. Layla’s story feels especially truncated; we see her working Voodoo magic, but her beliefs aren’t explored.

The actors struggle with this material, and I don’t blame them. Character motivations appear and disappear; Edmond’s affair with Layla is sometimes significant and sometimes not, for example. Other things are even more baffling. Near the end of the movie the characters find snow in a valley but not on a mountain above the valley, and I don’t understand how the meteorology works. There’s an extended sequence where the family’s wagon breaks a wheel on a narrow mountain trail, and lacking tools to repair it they load their luggage on horses and abandon it; that’s fair enough, but some of the characters who were stuck behind the wagon then pass around it on the extremely narrow lip of the trail, and the movie emphasises their jeopardy. One wonders why they didn’t crawl under it, or take the thing apart. One character finally climbs over it, and the others are stunned by her cleverness. I was stunned by the movie’s lack of same. 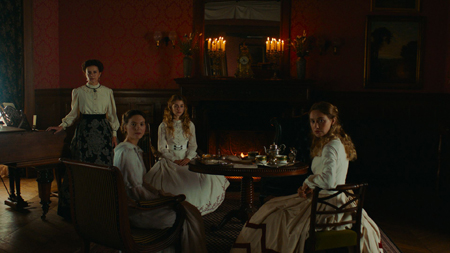 Savage State looks nice. But there’s no depth, and no development to the narrative. There is no coherent story to this film. And there is no coherent sense of its setting. And, though there are attempts to talk about war and savagery, there’s no coherent sense of what war means, either. The role of women in a patriarchal society is confronted in a clumsy way, but slavery, which ought to have been front and centre in the context of this story, is not. You could say that’s a function of Europeans trying to tell a tale from American history. But it’s probably more accurate to say it’s a function of bad writing.