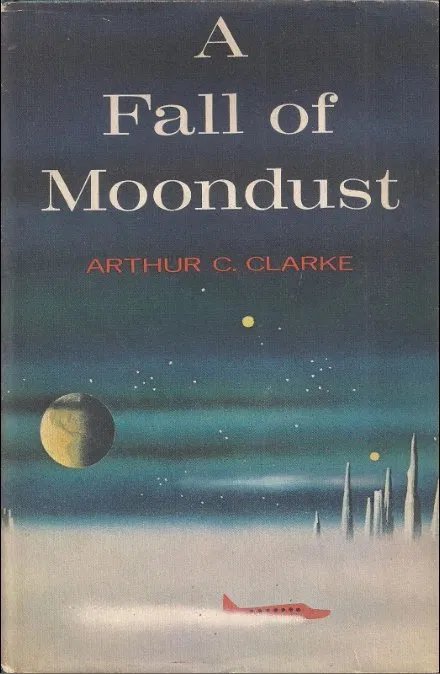 Arthur C. Clarke is best known for his visionary, philosophical tales of human destiny, with their explorations of the depths of time and space, their brushing contact with godlike aliens: Childhood’s End, The City and the Stars, “The Star,” “The Nine Billion Names of God,” and of course 2001: A Space Odyssey. But another type of story turns up regularly throughout his career: the near-term technological puzzle story. Prelude to Space (covered here) has its philosophical overtones, but is basically about the technical and political issues of launching a rocket to the moon. And of course the center section of 2001 is all about diagnosing a malfunctioning part, and dealing with a malfunctioning supercomputer. Famous early stories like “Technical Error” and “Superiority” dealt with issues of problematic future technology.

Clarke’s 1962 novel A Fall of Moondust is very much a story of technical problems and how they are solved (and the resolution is a happier one than those in the other titles just mentioned). Specifically, it’s about a search and rescue mission, anticipating the spate of “disaster” movies (and associated novels) about groups of civilians trapped in some situation (burning skyscraper, disabled passenger jet, and so on) and the parallel efforts of rescuers to save them, that were popular especially in the ‘70s. (In fact, Wikipedia notes this novel’s similarity to a 1978 film about a stranded submarine, Gray Lady Down.)

The premise of Moondust involves what some scientists were worried about back before the earliest probes reached the Moon (the first one was the Soviet Luna 2, in 1959). What if the smooth areas of the lunar surface, those “maria,” were seas of fine dust? So fine that a spacecraft attempting to land there might simply sink into the dust and vanish? Clarke had speculated about this at least once before, in Earthlight, his 1955 novel, covered briefly below; in Moondust the central premise is that yes, the seas are areas of dust so fine they can be “sailed” upon.

A tourist ship sinks into a sea of dust on the Moon and the narrative follows the efforts of the ship’s crew to keep the passengers alive, and of rescuers on the surface to reach and rescue them. Which they do.

This is as suspenseful a novel as I think Clarke ever wrote, and though its central premise turned out to be wrong (fortunately), the problem and its solution are clearly laid out and dramatically narrated. 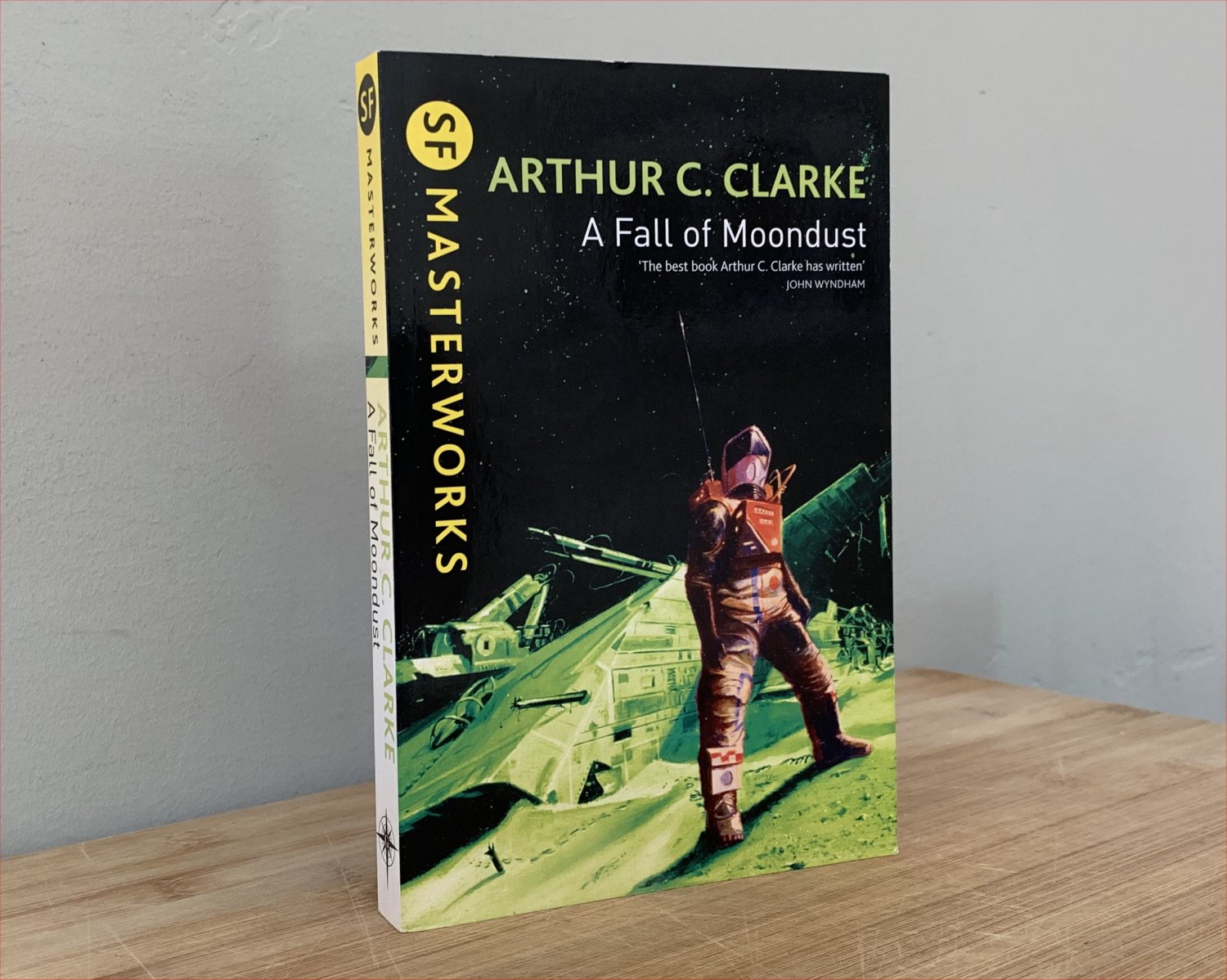 Page references are to the SF Masterworks edition, shown here. Appropriately for its story, the narrative here is third-person author omniscient, the POV moving smoothly from one situation or set of characters to the next, like an outline for a film script, while sometimes stepping outside the story for some typical Clarke cosmic overview.

On Earth and in Space—

On the Moon, Clavius City—

(From this point I’m abandoning strict chronological order of plot points, but rather grouping them by situation… Clarke effectively switches back and forth between those on the boat, and the rescuers, in cinematic fashion, gradually ratcheting up the tension. You *know* Selene’s occupants will be saved, but how? And how many different things can go wrong before they are?)

[McKenzie] “I’m an Australian first, and an aboriginal second. But I must admit that my white countrymen were often pretty stupid; they must have been, to think that we were stupid! Why, way into the last century some of them still thought we were Stone Age savages. Our technology was Stone Age, all right — but we weren’t.”

[Harris] “If your people weren’t in the Stone Age, Doc — and just for the sake of argument I’ll grant that you aren’t — how did they whites get that idea?”

[McKenzie] “Sheer stupidity, with the help of a preconceived bias. It’s an easy assumption that if a man can’t count, write, or speak good English, he must be unintelligent. I can give you a perfect example from my own family. My grandfather — the first McKenzie — lived to see the year 2000, but he never learned to count beyond ten. And his description of a total eclipse of the Moon was ‘Kerosene lamp bilong Jesus Christ he bugger-up finish altogether.’

“Now, I can write down the differential equations of the Moon’s orbital motion, but I don’t claim to be brighter than grandfather. If we’d been switched in time, he might have been the better physicist. Our opportunities were different — that’s all. Grandfather never had occasion to learn to count, and I never had to raise a family in the desert — which is a highly-skilled, full time job.”

“You still haven’t explained to us,” Mr. Schuster was now saying, “why the Saucer people should be after you. What have you done to annoy them??

“I was getting too close to some of their secrets, so they have used this opportunity to eliminate me.”

“I should have thought they could have found less elaborate ways.”

“It is foolish to imagine that our limited minds can understand their mode of thinking. But this would seem like an accident; no one would suspect that it was deliberate.” 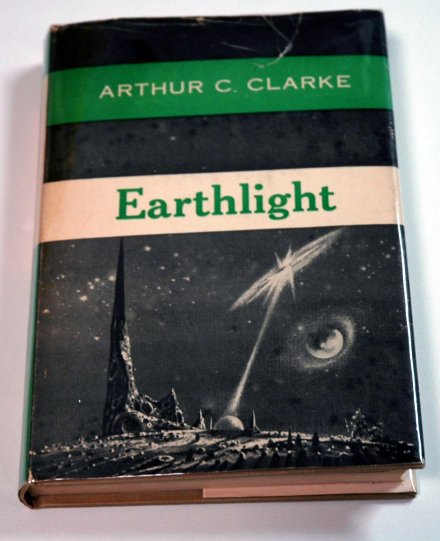 This earlier 1955 novel is perhaps the most similar of Clarke’s other novels to Moondust. For one, they’re both set on the Moon, and both a couple hundred years in the future, when colonies have been established on Mars and Venus. Second, both involve outsiders coming to the Moon that serve as witnesses to the action. In Moondust it was the reporter Spenser; in Earthlight it’s the main character, Bertram Sadler. Summarizing the key points and plot:

Mark R. Kelly’s last review for us was of Philip K. Dick’s Eye in the Sky and two others. Mark wrote short fiction reviews for Locus Magazine from 1987 to 2001, and is the founder of the Locus Online website, for which he won a Hugo Award in 2002. He established the Science Fiction Awards Database at sfadb.com. He is a retired aerospace software engineer who lived for decades in Southern California before moving to the Bay Area in 2015. Find more of his thoughts at Views from Crestmont Drive, which has this index of Black Gate reviews posted so far.