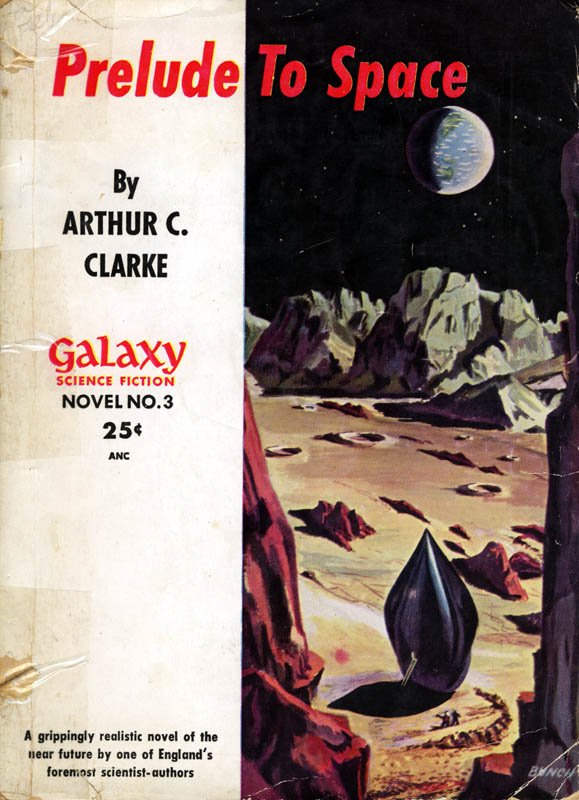 Having in my two previous columns here covered Isaac Asimov’s first proper novel (Pebble in the Sky) and Robert A. Heinlein’s first-written novel (For Us, the Living), it’s appropriate now to revisit Arthur C. Clarke’s first novel, Prelude to Space. (Asimov, Heinlein, and Clarke were regarded as the “Big Three” science fiction writers for several decades beginning in the 1950s.) This is a novel about the launch of the first spaceship to go to the moon. Clarke had a background in radar and aeronautics — he famously anticipated the use of geosynchronous satellites for communications — and so one might expect a more truly scientifically authoritative novel compared to those from Asimov (whose background was only in biochemistry) and Heinlein (military service and politics). Indeed, Clarke’s novel is a better guess about how a launch to the moon would work than were those of other writers of the time, who clung to the vision of heroic lone inventors and single enormous rockets that would take off and return intact. Still, some of Clarke’s guesses were misses.

The novel was published in 1951 as a “Galaxy Science Fiction Novel” in magazine digest format, (as were some 45 other titles over the decade of the 1950s). Its first book publications were in 1953 from Sidgwick & Jackson in the UK, and in 1954 from Gnome Press in the US, and shortly thereafter if not simultaneously in paperback from Ballantine Books in the US, who kept the book in print for 40 years. (Isfdb doesn’t show a print edition since Ballantine’s last, 1993, edition.)

Critics have occasionally complained about Clarke’s stilted prose — SFE even makes a point of saying this and his second novel “suffer from the rather wooden prose which Clarke later fashioned into a more flexible instrument, though he was never able to escape an occasional stiffness in his writing.”

I’ve always perceived his prose quite differently, at its best eloquent and evocative, with appeals to the scope of time and space as a context for human society, how moves like this first trip into space are evolutionary events. At worst, his prose can be portentous, too many things imbued with cosmic significant, and a little portentousness goes a long way, but Clarke’s is not the stiff prose of engineers whose writing is barely grammatical (as I experienced in my own engineering career). At his best, Clarke evokes the awe and mystery of the vast cosmos, and humanity’s tiny place in it, in ways that anticipated Carl Sagan’s writing.

In 1978, the first spaceship to travel to the Moon and back, headquartered in the UK and built in Australia, is readied, with a crew of three. There are political issues to deal with and interference from a religious zealot, but the launch goes off as planned, launching a new era in humanity’s evolution.

It’s hard to imagine how much better a novel about the first launch to moon could have been, in 1951. Some of Clarke’s speculations — especially that the ship would be launched from 5-mile long track in the Australian desert, rather than on a rocket — miss the mark, but his realization that the configuration of the ship would not be a enormous single-stage rocket, but rather staged, and not financed by the private sector, but by government, were prescient. Clarke provides an authenticity to the proceedings, no doubt gleaned from his own service experience, that no one else does. And Clarke pauses for speculations and philosophy and political insights. 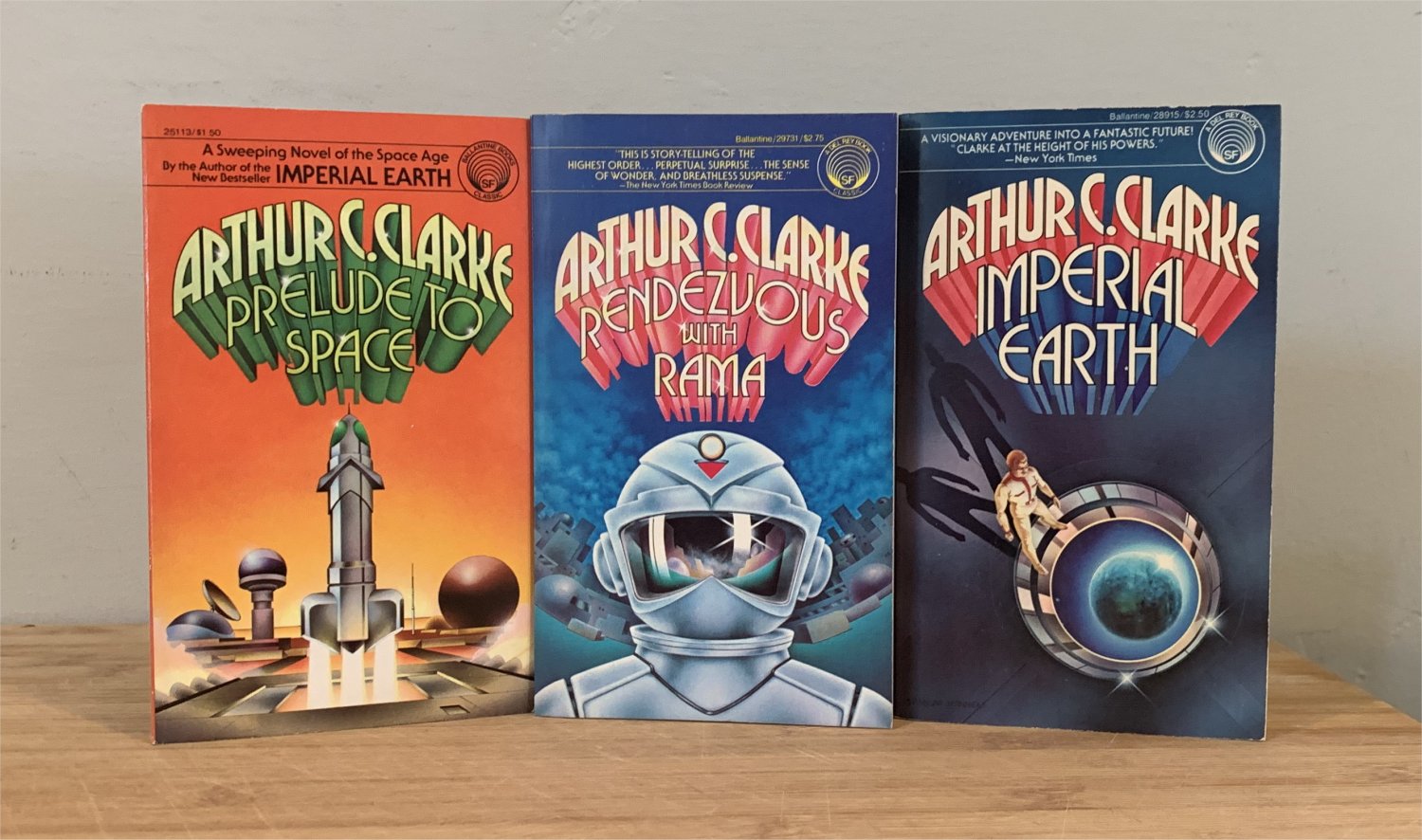 1976, 1980, and 1981 Ballantine editions of three Clarke novels, with cover art by Stanislaw Fernandes:
Prelude to Space, Rendezvous with Rama, and Imperial; the art for the first is suggestively symbolic, but inaccurate. (Click to enlarge.)

Description with Quotes and Comments

The book is divided into three parts, each of which begins with a multi-page italicized scene-setting. Page references are to the Ballantine edition shown above.

Begins with a description of the first spaceship, Prometheus, build in the Australian desert, and its Alpha and Beta parts and how they will interact on the voyage, given the realization that the trip to the moon and back couldn’t be done in one machine.

Let’s start right away with some consideration of Clarke’s prose. The opening paragraph:

For five miles straight as an arrow, the gleaming metal track lay along the face of the desert. It pointed to the northwest across the dead heart of the continent and to the ocean beyond. Over this land, once the home the aborigines, many strange shapes had risen, roaring, in the last generation. The greatest and strangest of them all lay at the head of the launching track which it was to hurtle into the sky.

Wooden? Stiff? I think it rather eloquent. Yet this section ends with some mild portentousness:

In a few weeks, if all went well, she would carry the hopes and fears of humanity into the lonely deeps beyond the sky.

There were a lot of people in this country who didn’t intend to wait that long. They believed that the crossing of space was as essential for progress as the discovery of the New World had been four hundred years before. It would open up new frontiers and give the human race a goal so challenging that it would overshadow national differences and put the tribal conflicts of the early twentieth century in their true perspective. Energies that might have gone into wars would be fully employed in the colonization of the planets—which could certainly keep us busy for a good many centuries. That was the theory, at any rate.

Civilization could never stand still. Over the very ground on which he was walking, the mammoths had once come trampling through the rushes at the river’s edge. They, and not the ape-men watching from their caves, had been the masters of this land. But the day of the ape had dawned at last: the forests and swamps had given way before the might of his machines. Dirk knew now that the story was merely beginning. Even at this moment, on far worlds beneath strange suns, Time and the Gods were preparing for Man the sites of cities yet to be.

This begins with another italicized section describing, gently and precisely, how the Beta vehicle will deliver a fuel container of methane into orbit and then descend back to Earth (for reuse). Clarke’s style in such sections was unchanged 17 years later in his novel version of 2001: A Space Odyssey.

“What do you expect to find on the Moon?”

“Lots of lava, and very little else.”

“Do you expect to find any life on the Moon”

“Very likely. As soon as we land, I expect there’s be a knock on the door and a voice will say, ‘Would you mind answering a few questions for the Selenites’ Weekly?’”

The italicized intro is a longer one, about attitudes toward space travel: the strategic ones (military bases and control of space), and the theological opposition, worth quoting:

A second and perhaps more important body of opinion, while admitting that interplanetary travel was possible, opposed it on mystical or religious grounds. The “theological opposition,” as it was usually termed, believed that man would be disobeying some divine edict if he ventured away from his world. In the phrase of Interplanetary’s earliest and most brilliant critic, the Oxford don C. S. Lewis, astronomical distances were “God’s quarantine regulations.” If man overcame then, he would be guilty of something not far removed from blasphemy.

And the idea of escaping the eventual fate of the Earth, and whether humanity would merely bring its misery to possibly more advanced worlds, with an analogy of “a fleet of savage war-canoes drawing slowly into New York harbor.”

And discussing the cranks, the flat earthers [even in 1951!], the psychics who already know all about what the planets are like (these are usually little old ladies). But ending with a manifesto from the mission’s planners: “”We will take no frontiers into space.”

Out of the fears and miseries of the Second Dark Age, drawing free — oh, might it be forever! — from the shadows of Belsen and Hiroshima, the world was moving toward its most splendid sunrise. After five hundred years, the Renaissance had come again. The dawn that would burst above the Apennines at the end of the long lunar night would be no more brilliant than the age that had now been born. 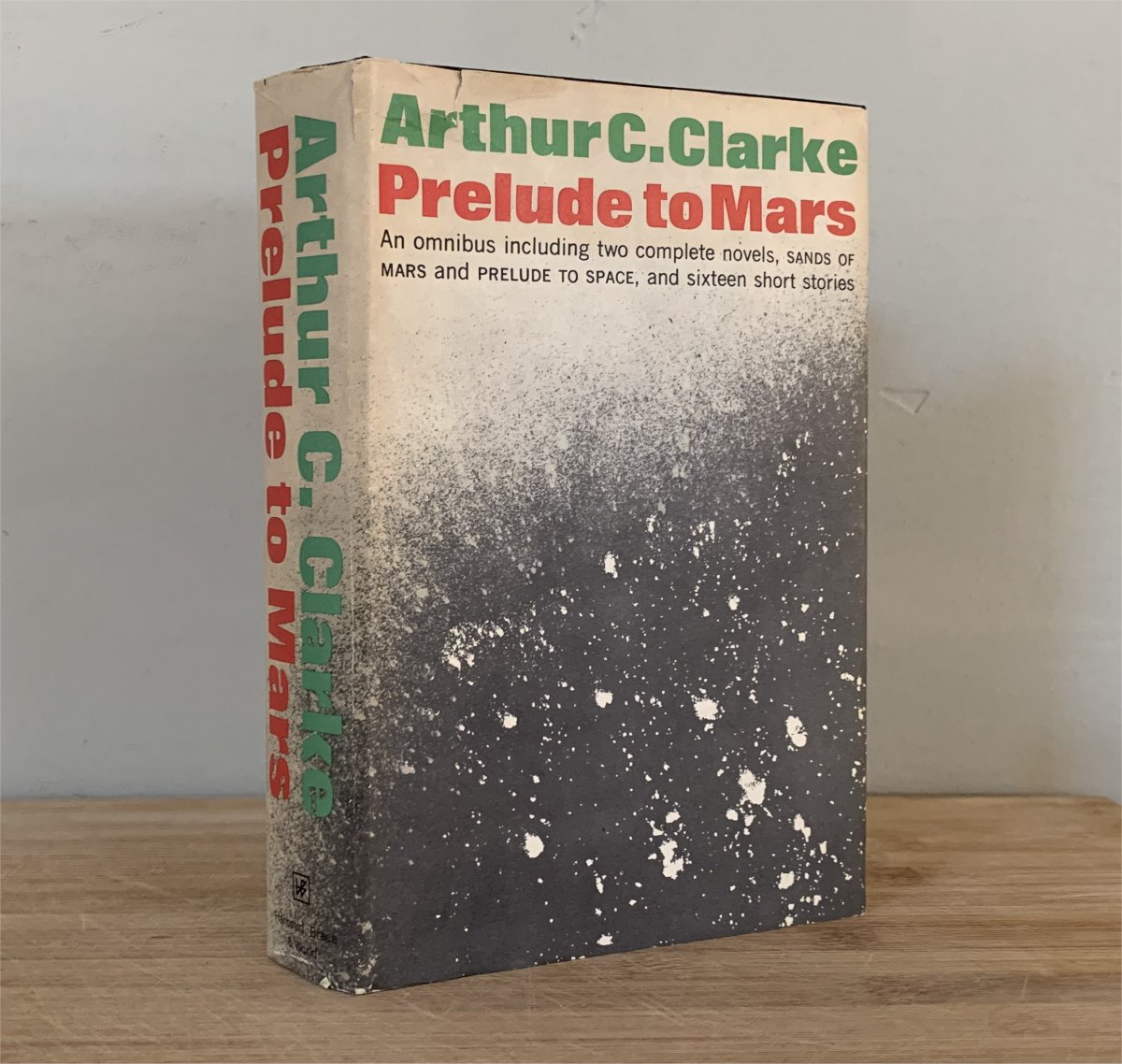 This first novel by Arthur C. Clarke embodies the two principal themes that informed his later work: the precise technical engineering details of how spaceflight would work, and the evocation of humanity’s place in the universe and its potential to explore and understand it.

Mark R. Kelly’s last review for us was Robert A. Heinlein’s For Us, the Living. Mark wrote short fiction reviews for Locus Magazine from 1987 to 2001, and is the founder of the Locus Online website, for which he won a Hugo Award in 2002. He established the Science Fiction Awards Database at sfadb.com. He is a retired aerospace software engineer who lived for decades in Southern California before moving to the Bay Area in 2015. Find more of his thoughts at Views from Crestmont Drive, which has this index of Black Gate reviews posted so far.

I have that SF Bookclub edition you show. I reread this a couple of years ago, and was surprised at how well it held up. though dated, it all made perfect sense and I enjoyed it. Thanks very much for the review!

For some reason I have never reread that book after encountering it probably at the age of 12 or so, when Clarke was one of my gateways to adult SF. I really don’t remember it at all!