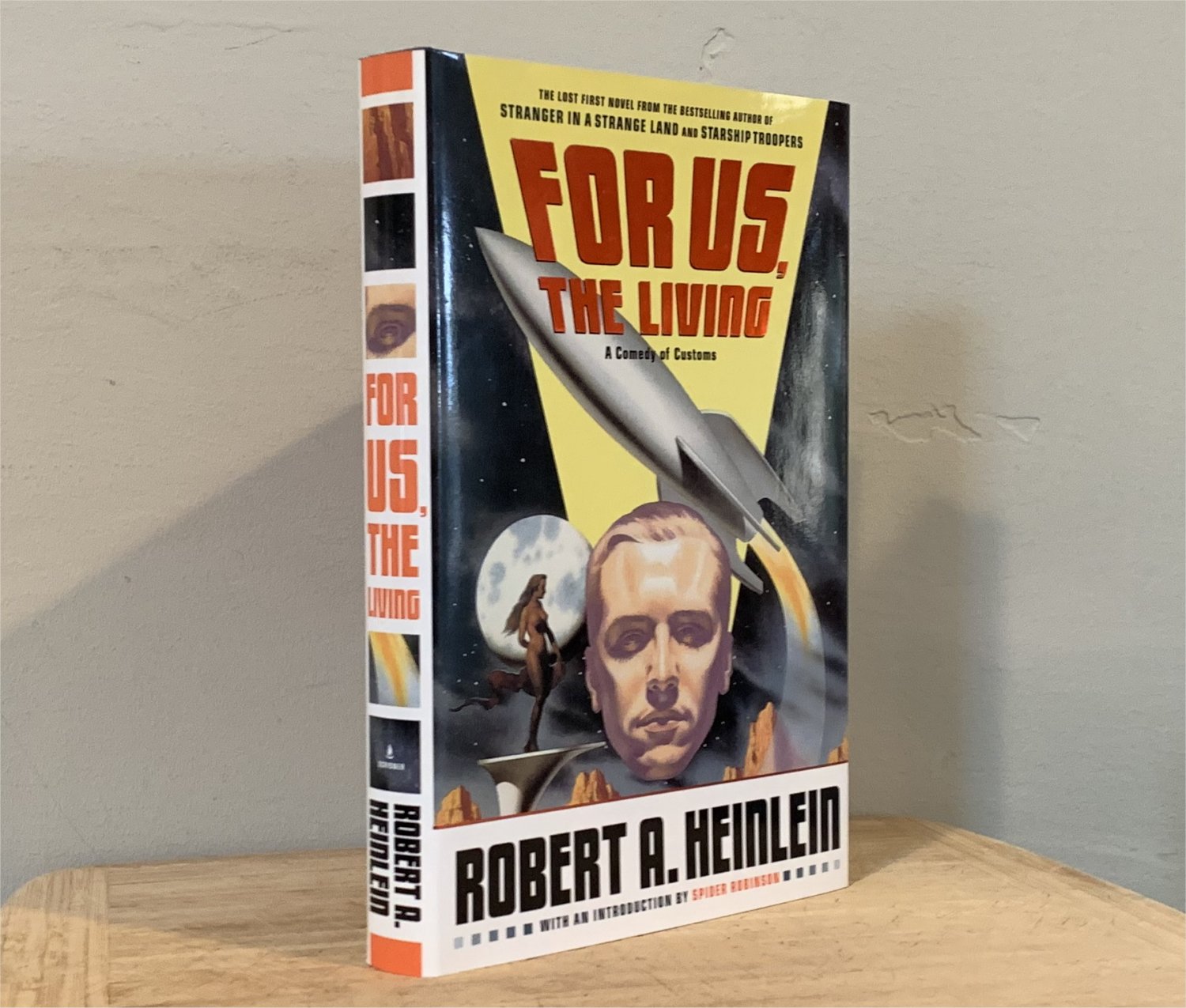 For Us, the Living by Robert A. Heinlein; First Edition: Scribner 2004.
Jacket illustration by Mark Stutzman (click to enlarge)

For Us, the Living: A Comedy of Customs
by Robert A. Heinlein
Introduction by Spider Robinson; Afterword by Robert James, Ph.D.
Scribner (263 pages, $25.00 in hardcover, 2004)

Almost on a lark, I picked up the first novel by Robert A. Heinlein a few days ago, and read it through. It’s a fascinating book on several levels.

First, it’s Heinlein’s first novel in that it’s the first one he wrote, way back in 1938 and 1939, when he hadn’t yet broken into print. But it didn’t sell, was never published at the time, and went unknown for decades. In fact the manuscript was thought lost; Heinlein and his wife had destroyed copies in their possession in the approach to Heinlein’s death. Yet another copy of the ms. was found years later, after Heinlein’s death in 1988, and, as Robert James explains in an afterword here, was published in 2004, with an introduction by Spider Robinson. (Spider Robinson would later publish Variable Star, based on a Heinlein outline, in 2006; I have not read that, though I believe I’ve read every other Heinlein book at least once, albeit some not in decades.) I read For Us, the Living when it first came out, in late December 2003, but didn’t remember the details of its future society, and wanted to refresh myself on them, until rereading it this week.

Second, Heinlein repurposed many of the novel’s ideas in later stories and novels, some written only a year or two later (he quickly learned how to write saleable stories).

And third, it’s remarkable how so many of these ideas anticipated real-world discoveries and ideas of recent decades. He was ahead of his time in many ways.

This novel is in the tradition of didactic utopias like Edward Bellamy’s Looking Backward: 2000-1887 (published in 1888) and H.G. Wells’ The Sleeper Awakes (1899), both of which involve characters from the authors’ times who become comatose in some way and wake centuries later. There were many similar novels, says Wikipedia; the motives of these weren’t to write dramatic stories in the extrapolative mode of later science fiction, but to use fictional frames to present authorial lectures about how things ought to be in the future. Many of these were socialist in nature, and they dealt with matters of politics, society, morals, and much else.

So Heinlein’s first novel isn’t much of a novel, as Spider Robinson acknowledges in his introduction. The plot is threadbare, merely a framework for much discussion of history, religion, economics, and human nature.

Some other Heinlein 1st editions:
Time Enough for Love, Putnam, 1973, jacket illustration by Vincent di Fate;
The Number of the Beast, Fawcett Columbine, 1980, cover by Richard M. Powers;
The Cat Who Walks Through Walls, Putnam, 1985, jacket art by Michael Whelan;
To Sail Beyond the Sunset, Ace/Putnam, 1987, jacket painting by Boris Vallejo

Key themes and ideas, with my comments [[ in double brackets ]] 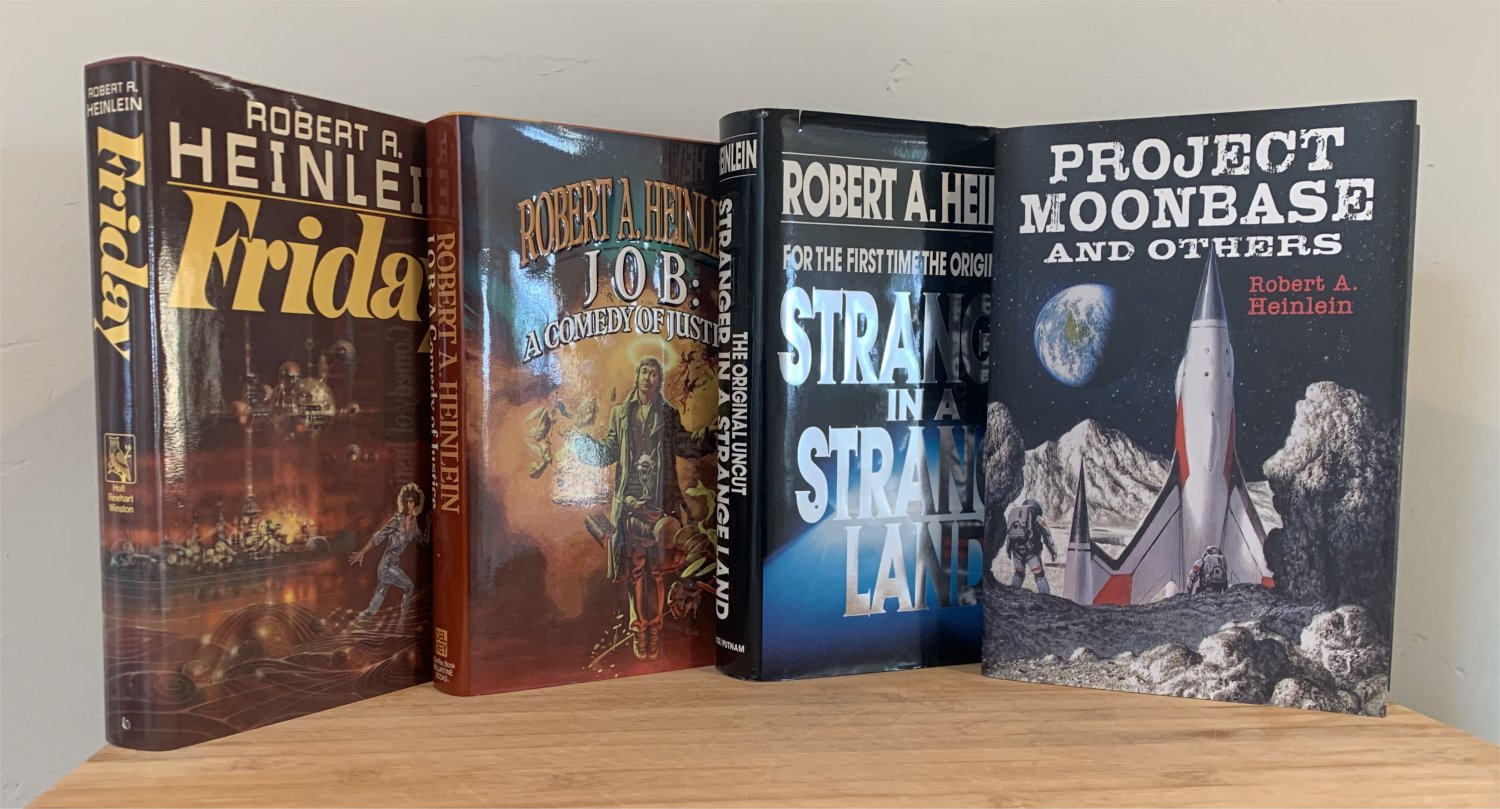 Some of these ideas about economics, about Social Credit Theory, I gather, show up in Heinlein’s 1942 novel Beyond This Horizon, which I haven’t read in decades, but will revisit soon.

Meanwhile, there are several other specific ideas that Heinlein entertained in this novel, that later became themes of later stories:

Finally I’ll quote a passage, spoken by the historian from Berkeley, about religion and its role in society. Some of these lines did show up in “If This Goes On—,” as quoted in my post linked above. Pages 83-84:

“All forms of organized religion are alike in certain social respects. Each claims to be the sole custodian of the essential truth. Each claims to speak with final authority on all ethical questions. And every church has requested, demanded, or ordered the state to enforce its particular system of taboos. No church ever withdraws its claims to control absolutely by divine right the moral life of the citizens. If the church is weak, it attempts by devious means to turn its creed and discipline into law. If it is strong, it uses the rack and the thumbscrew. To a surprising degree, churches in the United States were able, under a governmental form which formally acknowledged no religion, to have placed on the statutes the individual church’s code of moral taboos, and to wrest from the state privileges and special concessions amount to subsidy. Especially was this true of the evangelical churches in the middle west and south, but it was equally true of the Roman Church on its strongholds. It would have been equally true of any church; Holy Roller, Mohammedan, Judaism, or headhunters. It is a characteristic of all organized religion, not of a particular sect.”

This is the sort of matter-of-fact attitude about religion that pervades most science fiction about the future, though it’s rarely stated as explicitly as this. It’s not meant to be controversial, or contentious, it’s just stating what’s obvious.

An earlier version of this article first appeared at View from Crestmont Drive.

Mark R. Kelly’s last review for us was Isaac Asimov’s Pebble in the Sky. Mark wrote short fiction reviews for Locus Magazine from 1987 to 2001, and is the founder of the Locus Online website, for which he won a Hugo Award in 2002. He established the Science Fiction Awards Database at sfadb.com. He is a retired aerospace software engineer who lived for decades in Southern California before moving to the Bay Area in 2015. Find more of his thoughts at Views from Crestmont Drive.