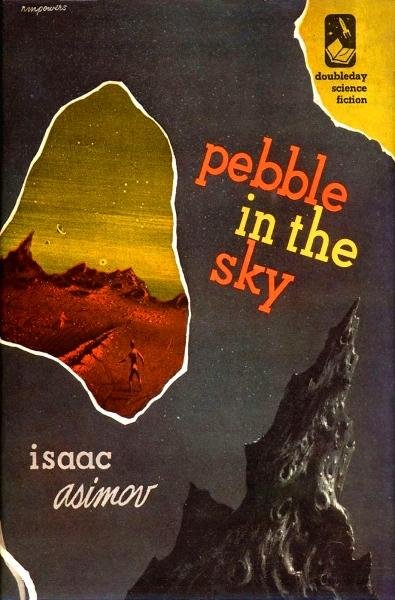 Isaac Asimov’s most famous works are likely the Foundation Trilogy and I, Robot, but these are story cycles, not novels. Concurrently with the publication of those books, Asimov published his first three actual novels: Pebble in the Sky; The Stars, Like Dust; and The Currents of Space, from Doubleday in 1950, 1951, and 1952. They share a common future history background (presaged by earlier short fiction like “Black Friar of the Flame” and “Mother Earth”), in which humanity has colonized many planets across the galaxy, while Earth, for reasons of apparently having suffered a nuclear war, is a backwater, despised by the outer worlds. Yet the books vary in the degree to which they are science fiction, and not merely space opera (that is, melodramas with good guys and bad guys fighting for dominance) or historical incidents translated into future settings. Asimov was a sophisticated writer, and all three of these early novels offer complex mysteries in which problems must be solved and villains identified. But in terms of their speculative content, they vary: the middle book, The Stars, Like Dust, is the weakest; the third, The Currents of Space, the strongest; and this first, Pebble in the Sky, somewhere in between.

A contemporary Chicago man is transported 50,000 years to a future radiation-ravaged Earth, in a galaxy where thousands of other (human-settled) planets look down on Earth as disease-ridden. An archaeologist, whose controversial thesis is that Earth is the source of all humanity, comes to Earth, just as forces on Earth prepare a wide attack on the rest of the galaxy to reassert its dominance. The Chicago man gains the ability to use a “Mind Touch” to read others’ minds, and with this skill helps head off the launch of that attack.

This is as complex a story as Asimov had written to then, full of scene and incident and characters working at cross-purposes, and also full of coincidences and contrivances of plot, and zealots who think such coincidences are evidence of conspiracies. There are some SF ideas here — the idea that humanity has forgotten its origins on Earth, the Rule of Sixty, the Mind Touch — but the plot is driven by circumstance without much science-fictional payoff. 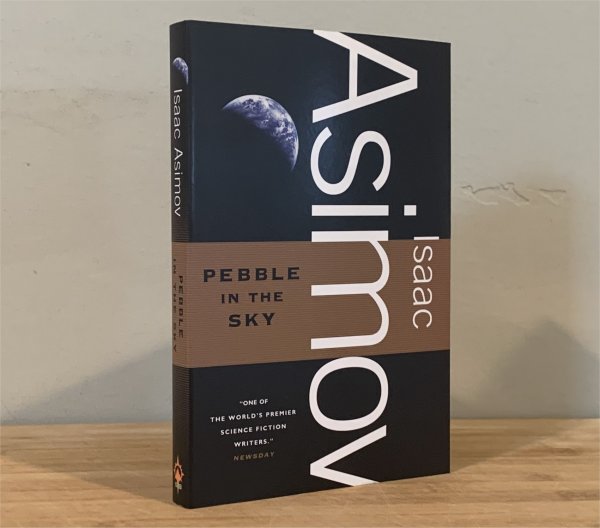 Pebble in the Sky by Isaac Asimov. Orb, 2010.
Cover by Digital Vision/Getty Images (click to enlarge)

Page references are to the most recently available edition, the Tor/Orb trade paperback edition, published in May 2010, shown here.

The most memorable scene from all three books is the opening one of this.

The scene shifts to far-future Earth.

The scene in Chapter 3 shifts to that archaeologist visiting Earth.

Chapter 6 switches to the Procurator of Earth’s palace.

In Chapter 7 the archaeologist takes a trip.

Meanwhile, back in Chica, in Chapters 8 and 9, Joseph Schwartz has escaped. 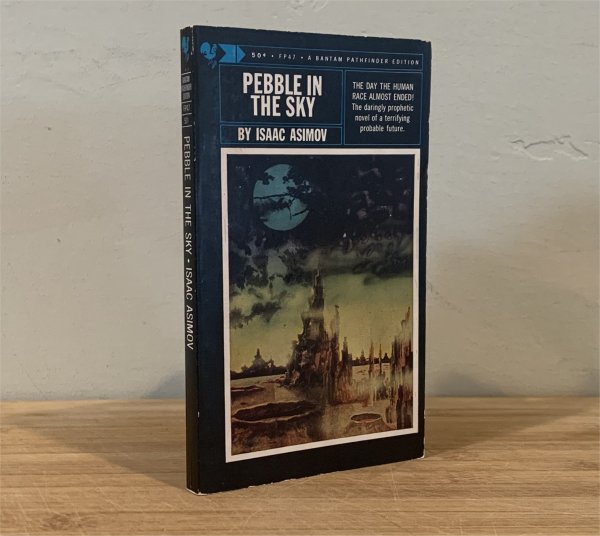 In Chapter 10 we meet the High Minister and his Secretary

In Chapters 11 and 12 Schwartz is again on his own…

Chapter 13, what does the High Minister think about this?

Chapters 14 and 15, back to that Institute scientist Shekt:

Chapters 19 to 21: Finale at Ford Dibburn

The novel is complicated and compelling, but is it science fiction? Or just a translation into a future setting of the history of Judea and the Romans? (Per Wikipedia.) This novel, and the one following, are almost entirely circumstantial. They’re clever in the way Asimov sets up the characters and has them interact in various coincidental ways. There are a couple interesting ideas here: the question, as in one of the first Foundation stories, of whether Earth is really the original home of all humans. (But how could this be forgotten? When the name of the Institute in Chica hasn’t changed in thousands of years?) And how it is that Earth came to be so reviled by the rest of the galaxy. The Synapsifier, on the other hand, is merely a convenient gizmo to solve the language problem and enable our ordinary man hero Joseph Schwartz to save the day. There’s no problem to the novel that’s solved in a truly science fictional way.

It’s amusing in this book how the plot is driven by no fewer than four arbitrarily aligned events: Schwartz arriving from the past; Shekt perfecting his Synapsifier machine; the archaeologist arriving from Sirius; and Earth about to launch its attack. At the same time, Asimov almost seems to mock his own coincidence plotting by having the bad guy, the High Minister’s Secretary, disbelieve that these events could all be coincidence and therefore it must be a conspiracy! This type of thinking — especially among nationalistic zealots — never seems to go away.

Mark R. Kelly’s last review for us was Fred Hoyle’s The Black Cloud. Mark wrote short fiction reviews for Locus Magazine from 1987 to 2001, and is the founder of the Locus Online website, for which he won a Hugo Award in 2002. He established the Science Fiction Awards Database at sfadb.com. He is a retired aerospace software engineer who lived for decades in Southern California before moving to the Bay Area in 2015. Find more of his thoughts at Views from Crestmont Drive.

I agree with your placement of the three novels as far as weakest to strongest. That said, I do actually enjoy all three.

The Stars, Like Dust was a book that haunted me for years because I remembered this specific book cover (the Paul Lehr cover, I know now) that was on my uncle’s bookshelf when I would borrow his SF books as a child, but couldn’t remember the author or book title…just that I wanted to find that book cover and read that book.

Years later I was telling friends that story while we shopped in a very cool used bookstore on a trip to Chicago and while I was telling the story I pulled a book off the shelf and lo and behold, there was the Lehr cover for The Stars, Like Dust. I was so blown away by the serendipity of it all.

One of the many books I have in my reading rotation right now is The Currents of Space. It is one of my favorite Asimov novels.

I usually like your reviews, but can’t agree this time.

As a very long time reader of both SF and Asimov, I can’t agree with your definitions of science fiction vs. space opera (they’re the same thing!) nor your idea that science fiction is just a retelling, with a future setting of old stories. If that were the case, all novels and stories, including the Bible, would be just retellings, regardless of genre. Genre labels are specifically made to describe the differences which it seems you are trying to erase.

Also, your detailed plot description offers complete spoilers for anyone who may not have read the book, which in my opinion is a no-no.

R.K. Robinson — I don’t agree that science fiction is the same as space opera; DYING INSIDE and TIMESCAPE are science fiction and in no way space opera. And I didn’t mean to say science fiction is a retelling of old stories; my point is that it should be more than that. Finally, all my “summary/reviews” are walkthroughs with commentary, that of course involves spoilers. That’s my style, in all my reviews.

Carl V Anderson — I have that same edition of THE STARS, LIKE DUST, Fawcett Crest, June 1972, with the very purple Paul Lehr cover!

Mark, I guess I was trying to say that science fiction is a genre, and hard sf, time travel, space opera, urban sf, etc. are sub-genres of it.

The same way mystery is a genre, and legal mystery, cozy, hardboiled, historical, etc. are sub-genres.