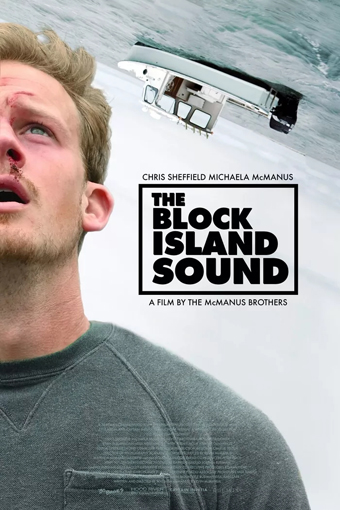 Day 9 of Fantasia began for me with The Block Island Sound. Directed by brothers Kevin and Matthew McManus, and written by Matthew, it’s a horror movie named for a body of water off the coast of Rhode Island. It’s the rare horror story that deals with inhuman mysteries on the northeastern coast of the United States while not feeling Lovecraftian at all.

The plot revolves around a family native to Block Island, where a small community largely of fisherfolk lives year-round, tripling in size in the summer tourist season. It is not summer as the film opens, and an old fisherman named Tom Lynch (Neville Archambault) is beginning to act very strangely. Tom’s adult son Harry (Chris Sheffield), who lives with him, is getting worried. Coincidentally, when a mass of dead fish washes ashore on the island, Harry’s sister Audry (Michaela McManus), who has moved away from Block Island, is sent by her bosses at the EPA to investigate. Accompanying Audry is her subordinate Paul (Ryan O’Flanagan) and her young daughter Emily (Matilda Lawler). They stay at the family home as they investigate, and things become more and more unreal.

If the story’s about family, so’s the production; Michaela McManus is the sister of Kevin and Matthew, while in a Q&A after the film Sheffield described himself as an unofficial third McManus brother. At any rate the focus of the narrative is clearly on the Lynch family, as they reunite with plenty of long-held arguments still between them. Tom’s a hothead, who, as Audry percipiently observes, is always looking for someone to blame. Audry for her part is conscious of having left Block Island for another life, and is not especially happy to be back. And then there’s Tom, who may be slowly losing his faculties. Or may have something more disturbing afflicting him.

The movie’s not Lovecraftian, as I say, in part because it’s centred so intensely on the dynamic of the family — an emotional landscape utterly unlike anything in Lovecraft. It’s also far more class-conscious than Lovecraft, or at least conscious in a completely different way. If Audry’s vaguely like the academics who come to a small New England town to investigate some disturbing goings-on, her role in the story becomes something quite different: she’s involved, in ways Lovecraftian academics aren’t.

Worth noting that the look and feel of the film is also different from the twice-told narrative frame-structures of so much of Lovecraft. There’s an almost tactile sense to the film, a visual precision and a detailed soundscape — the washing of waves, the hush of wind — that between them convey a deep sense of place. That place has an atmosphere born not of isolation, though one does get that from the bare trees and the grey ocean, but of lives hard-lived. Tom’s home feels like the real home of a real person, living and working in a small town. The location of Block Island itself is shot such that it comes alive as a lived place, not defined in terms of its institutions so much as in the context for the lives and histories of the main characters. You believe that these people grew up here.

As I say, that comes from a precision of cinematography, capturing just the right images to get across the idea of a small town — late-night bars, rural highways, the small downtown. And that sense of precision extends into the writing, too. The movie’s a mystery that never feels obscure. Scenes do clearly-defined things for the characters, while moving forward the mystery of the weird occurrences of the island, and always feel true to life and logical.

The flip side is that sometimes there’s a sense not of predictability but of things happening too neatly. Two monologues, one early and one a little later, lay out the plot and themes of the film. You always know generally what’s driving the film because of the first, which is admittedly not brought back up or hammered home. The second conversation’s less obvious in the moment, but is repeated as voice-over at the conclusion to clear up the last mysteries of what we’ve just watched. Together these monologues lay out a touch too neatly what it is we see. There’s not a lot of ambiguity by the end of the film; although perhaps this kind of story does not require ambiguity.

There’s a sense in which this is a kind of environmental horror in two senses of the word ‘environment.’ Of course the human interaction with nature and the mysteries of the world isn’t far below the surface of the story. But it’s also a story about a family that comes from a specific place, and the specific social context that produced them. There is horror here in how society shapes character, but also in what happens when someone’s abstracted from the social context only to be forcibly reinserted after being changed.

Still, if the themes dovetail, narratively the film’s horror elements occasionally conflict with the family drama aspect. Notably, Audry takes a trip toward the end of the film to speak to a character who turns out to be the guy who knows how the monster works — the guy in a horror movie who gives an infodump that gives the other characters just enough to know what they’re up against. And that feels out of place given the realism of the rest of the movie. Mostly, the more-than-natural aspects of the story are underplayed, for better or worse; after clearly establishing that strange doings are afoot in the film’s early moments, the weirdness is slow-pedalled much of the rest of the way. It’s effective once you understand what you’re watching, but the integration of horror into domestic life still feels erratic.

That mostly stands out due to the overall sureness of the rest of the film. The acting does a good job of conveying the family bond — I’m not sure how much I bought Chris Sheffield’s Harry as a working man, but his emotional arc felt thought-through, and Michaela McManus’ Audry had the observant sense of a scientific thinker as well as a scientist by trade. Overall, then, The Block Island Sound works; it’s a horror story that lives and dies by its characters, in way not true of most genre tales, and since the sense of credible characters coming out of a credible human context succeeds, so does the film as a whole.