The following is an excerpt from Keith J. Taylor’s essay for Robert E. Howard Changed My Life, an upcoming book from the Rogue Blades Foundation.

It has often been said that Robert E. Howard’s main heroes were largely cut to the same pattern — tall, powerful Gaels or proto-Gaels, black-haired, blue-eyed, mighty in combat, scowling and somber. Conan himself fits that description, as does Kull of Atlantis, Turlogh Dubh O’Brien, the less-than-idealistic Norman-Irish crusader Cormac FitzGeoffrey — and Cormac Mac Art, though the latter has “narrow eyes of a cold steel-grey” rather than blue ones.

There are other types, certainly. James Allison’s former incarnations are all Nordic. Bran Mak Morn, the dark, compact Pict committed to a losing fight for his people, is of Mediterranean race. Solomon Kane, though he has black hair and pale, icy eyes, is not particularly Celtic.

The black-haired, blue-eyed Gaels, much alike as they are physically, show greater variation in character and personality than they sometimes receive credit for. Kull seems asexual (“He had never been a lover”) and although a great fighter, he often broods on the nature of existence and reality, the difference between appearance and what truly is, even whether anything truly is.

Conan is decidedly not asexual! His interest in lovely women is active and frequent. Nor is he concerned with the difference between seeming and reality. “If life is illusion, I am no less an illusion, and so it is real to me,” he says to Bêlit, and leaves it at that, untroubled. Although, like Kull, he becomes a king who was once an outlaw barbarian, he does not constantly feel like a misfit in the civilized kingdom he rules, and even acquires a sense of responsibility and loyalty to his adopted land. Turlogh O’Brien, who flourishes in the early 11th century after the battle of Clontarf, doesn’t have much of a love life, but then he spends most of his time as an outcast from his clan, fighting for bare survival, outlawed on false charges. Nevertheless, he remains loyal to his people when, for instance, one of them is kidnapped by Vikings — for whom he feels an “almost insane hatred.”

Cormac FitzGeoffrey, who heads off to the Crusades because “Ireland was too hot for me,” is a contemporary of Richard the Lionheart. He’s equivocal about Richard, whom he admits is “a mighty fighter, though a fool withal,” and is essentially so rage-filled he makes Turlogh Dubh look blithe. It seems to stem from the brutal mistreatment he received in Ireland from the time he was born. His friends are few. He’s reckless, careless of life, makes enemies easily and pursues them obsessively.

And then there is Cormac Mac Art. 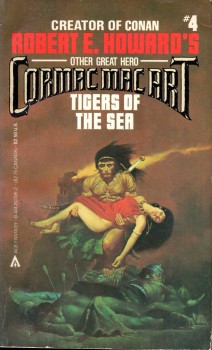 Cormac bears the same name as one of the greatest kings in Irish legend. Like FitzGeoffrey and Turlogh Dubh, he lives in historical times — but a vague, legend-ridden period, the late 5th century A.D., when the Roman legions had withdrawn from Britain and the Saxons were pressing in, establishing their own kingdoms in Kent, Sussex and southern Hampshire. Once Cormac was a chief of Irish reivers, but now he is the right-hand man of a Danish pirate, Wulfhere Hausakliufr, the Skull-Splitter, a gigantic red-beard with none too subtle a brain. He leads his crew through his gigantic strength and prowess in combat — and, I would suppose, though this isn’t stressed in the original Cormac stories, through being a superb seaman. Cormac, though — and this is one of the things that sets him apart from most other Howard heroes — is cunning as Loki. The British minstrel Donal, who knows him, says that Wulfhere “depends for advice and counsel” on Cormac, who is “crafty as a serpent and is known to us Britons of old.”

Now that struck a chord with me from the first. Hmm. Cormac is clever, eh? Doesn’t just bull ahead, hacking and carving his way through obstacles? Outwits his enemies? I liked that.

It must be admitted that the Cormac Mac Art stories aren’t among Howard’s very best. None were published in his lifetime and he finished only two, “Swords of the Northern Sea” and “Night of the Wolf,” leaving two others as incomplete fragments. Richard L. Tierney finished “Tigers of the Sea,” the title yarn of a collection published by Donald M. Grant in 1973. Tierney also completed “The Temple of Abomination,” the only story of the four to contain a supernatural element. The temple is haunted by grotesque satyr-like beings with a leader called the Dark Druid, who turns out to be the last of the Valusian serpent-men. They attack the Vikings in “a flood of black madness and red horror,” but as Wulfhere’s Danes close ranks and swing their axes from behind their shield wall, the fiends find they’ve made a disastrous mistake, in a typically vivid Robert Howard scene of battle.

The other three stories involve clashes between Wulfhere’s crew of Danes, other Vikings, and hordes of Picts who, a couple of centuries after Bran Mak Morn’s time, are fading from the scene at the wild edges of the world.

Now Cormac’s time, the 5th century, is a great setting for fantasy. It contained the seeds of the King Arthur legends and other epics like Beowulf, the Nibelungenlied, and the Danish Hrolf Kraki’s Saga. (The hero Beowulf’s uncle Hygelac really lived, or a king of that name did, and died in a raid on Gaul circa 515 A.D., so he could easily have been a strong, young sea-rover a quarter-century before, and even encountered Cormac and Wulfhere!) The era contains enough known facts to provide a foundation, a sense of reality, but also few enough to give the imagination plenty of leeway.

Keith Taylor was born in Tasmania in December 1946, after his father Jack came back from Hitler’s War and married Fay Gourlay. Keith grew up at the foot of Mount Wellington with his three sisters, Ruth, Julie and Megan. A voracious reader from an early age (what writer wasn’t?), he began writing his own stories at nine. He suspects he might have been illiterate if television had existed in Tasmania then. He also discovered science fiction and fantasy early. At fourteen, Keith found the Ace Double Conan the Conqueror back-to-back with Leigh Brackett’s Sword of Rhiannon. That settled his fate permanently. After six years in the Australian army and Vietnam service, he began writing again, getting his start in Ted White’s Fantastic Stories with his yarns of the Irish bard Felimid. These eventually grew into a five-novel series. Keith’s other series characters include Nasach, a fisherman’s son and tough escaped slave, and Kamose the Archpriest of Anubis, whose sorcerous exploits take place in ancient Egypt circa 1180 B.C.E. Various other stories appeared in British editor Mike Ashley’s anthologies of fantasy, Arthurian fiction, and historical mystery. Illness about ten years ago interrupted Keith’s writing, but since then he’s returned to work. He now lives in Melbourne with his wife Anna and son Francis.

I loved Tiger of the Sea. Really think I need to whip my copy out and re-read. Andrew Ouffit wrote a Cormac pastiche, Sword if the Gael. That for no real reason is languishing on my books to read shelf.

A fine post by Mr. Taylor! What isn’t mentioned above is that Keith Taylor co-wrote the two best Cormac pastiche novels, THE TOWER OF DEATH and WHEN DEATH BIRDS FLY. He then used that experience to springboard off into his own universe, writing the “Bard” series of novels about Felimid mac Fal of Erin, some of the best historical Sword-and-Sorcery ever written.

Deuce – Thanks for the info. Wow, I was not aware, I will definitely look out for these! Yeah i have some of the Bard books, which i really need to read sometime. Someone was saying they in turn inspired The Bards Tale series of games?

PS, my copy of Tigers of the Sea has internal illustrations and is by Zebra Books, an imprint i have not ever encountered again. It has a cover illustration by Jeff Jones. I have yet to work out ow to post images into comments here, will see what I can do to add it.