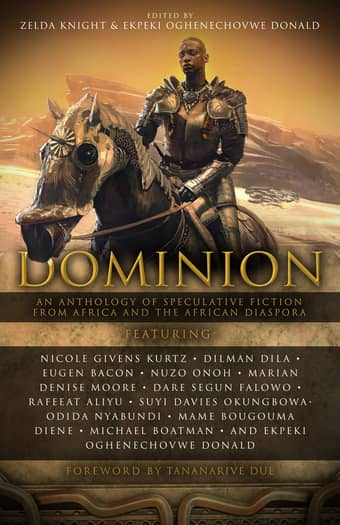 Dominion is a tough one to accurately summarize. During the Kickstarter way back, the editors said they were looking for speculative fiction about “the legacy and future of Africa and the African diaspora.” As I read, I had to remind myself how complicated that legacy is – which is reflected in these myriad and complicated stories.

I should warn you that some of its stories are rough. I choose that word carefully, and for multiple reasons. There’s a lot of dark fantasy and horror in here, some of it graphic and hard to read. But it reflects horror and darkness that’s real, making for some powerful stories.

“The Unclean” by Nuzo Onoh, for example, doesn’t pull its punches examining oppression of women, specifically through a problematic arranged marriage that can’t be easily escaped, even through supernatural means. Neither does Michael Boatman with “Thresher of Men” – a story that felt viscerally angry to me, channeled through a goddess of vengeance set upon an American town with a deep history of racist violence.

As a reviewer, it was interesting to find a balance of lighter stories, too – or at least stories where the issues the characters face are more microscopic and focused. Nicole Givens Kurtz ‘s “Trickin’” is still bloody but also kind of delightful, following a half-forgotten trickster looking for tributes on Halloween night. (Also love the mystery of the post-downturn city where it’s set – what happened there, Nicole?) “Sleep Pap, Sleep” by Suyi Davies Okungbowa is fabulous Africanjujuism (I believe “The Unclean” fits that genre, too), in this case weaving the understanding that you shouldn’t grave-robbing a blood relative with a young man’s guilt about his father’s death and how he treats his closest friend.

On the science fiction side, one of my favorites is Marian Denise Moore’s “A Mastery of German” about a young up-and-comer at a research firm, assigned to evaluate a project on transferring learned memories. There’s a neat implication discussed about ancestral memory and slavery, told through Candace’s relationship with her history-hunting father (which is an adorable sidebar, by the way). But the focus is mostly on ethics: is it all right to pay someone to take their memory of learning German (for example) and then do whatever you want with it? No easy answer there.

Between the stories above and more, Dominion explores possibly the widest range of stories I’ve seen in an anthology in a while. Which I think is the point – this isn’t a themed anthology, per se, but a collection that wants to remind readers (or point out, for those who aren’t aware) the variety in what Black SFFH authors are writing about. I think folks like N.K. Jemisin and Tochi Onyebuchi would be the first to say that if you’re only reading their stuff and thinking “I’m good,” you’re doing yourself (and Black authors generally) a disservice.

Read Dominion next, pick your favorite authors, and continue reading from there. You won’t be disappointed.