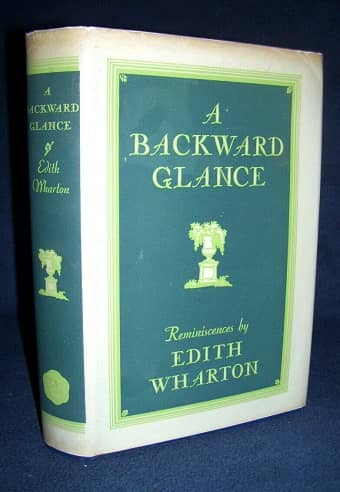 I have been making my way through Edith Wharton’s autobiography, A Backward Glance. Along the way I found an interesting bit about a famous (even notorious) French poet and filmmaker, and especially an ancient story he told her.

Wharton describes her time in Paris, particularly pre-World War I. As usual she spends most of her time describing the interesting people she knew there. One of these is Jean Cocteau, and she recounts a tale Cocteau told her, that he claims “he read somewhere.” Here is the story, which many of you will recognize, in a slightly different form:

One day when the Sultan was in his palace at Damascus a beautiful youth who was his favourite rushed into his presence, crying out in great agitation that he must fly at once to Baghdad, and imploring leave to borrow his Majesty’s swiftest horse.

The Sultan asked why he was in such haste to go to Baghdad. ‘Because,’ the youth answered, ‘as I passed through the garden of the Palace just now, Death was standing there, and when he saw me he stretched out his arms as if to threaten me, and I must lose no time in escaping from him.’

The young man was given leave to take the Sultan’s horse and fly; and when he was gone the Sultan went down indignantly into the garden, and found Death still there. ‘How dare you make threatening gestures at my favourite?’ he cried; but Death, astonished, answered: ‘I assure your Majesty I did not threaten him. I only threw up my arms in surprise at seeing him here, because I have a tryst with him tonight in Baghdad.’

Wharton claims never to have been able to trace the story. Curiously, A Backward Glance was published in 1934, almost exactly simultaneously with John O’Hara’s novel Appointment in Samarra. I wonder if Wharton read the novel — or at least its epigraph – in which of course O’Hara gives another version of the story! (Or if she ever saw W. Somerset Maugham’s play, from which O’Hara got his version.)

O’Hara attributes the story to Maugham (who called it “an ancient Mesopotamian tale”), and apparently it was given in one of Maugham’s plays, Sheppey, which appeared in 1933 (as O’Hara was searching for a title for his novel.)

But clearly Maugham got the story from an earlier source. I looked some more, and found a blog post discussing an episode of Sherlock in which the story is related. The blogger tracked down three sources, in all of which the “appointment” is in a different place. One is Maugham’s play (Samarra), another is the Babylonian Talmud (so a Jewish source), in which the appointment is in “the district of Luz,” and the third (from an Islamic writer) places the appointment in India. (The latter two sources both center on Solomon (or Suleiman) as the senior figure who, all unknowing, sends the people Death awaits to the place Death expects to meet them.)

So, then, Cocteau’s version, as recounted by Wharton, presents yet a fourth version, with one more location for the “appointment”: Baghdad!

It’s intriguing to see this story reflected in so many places – ancient Mesopotamia, the Jewish diaspora in the same area, the Islamic milieu, and such major 20th Century writers as Wharton, O’Hara, Maugham and Cocteau.

Cocteau himself was an interesting character. Wharton calls him “a passionately imaginative youth to whom every great line of poetry was a sunrise, every sunset the foundations of the Heavenly City.” Cocteau would have been in his very early 20s when Wharton knew him, and she lamented “the fading of that light” – his talent and passion, presumably. Cocteau was a poet when Wharton knew him, and considered himself a poet in everything he did, but later he became better known for his novels (most notably Les Enfants Terrible), plays, and in particular such movies as Beauty and the Beast and Orphée.

His reputation was besmirched during the Second World War, when he associated with some Nazis and collaborators, and wrote in his diary that France was being “disrespectful” to Hitler (while at the same time speculating on Hitler’s sexuality.) Cocteau himself was openly gay, making his tolerance of Hitler the more surprising. He was charged with collaboration himself after the War, though he was cleared, and apparently he attempted (with little success) to save some Jewish friends.

Wharton of course did not know anything about that episode when writing her autobiography, and I suspect her disappointment with Cocteau may have been tied to his opium addiction, or perhaps to the increasingly avant garde direction his work took.

Rich Horton’s last article for us was on the 1973 Ditmar Award winner for Best Dramatic Presentation: “Aussie Fan,” directed by John Litchen. His website is Strange at Ecbatan. Rich has written over a hundred articles for Black Gate, see them all here.

Beauty and the Beast (La Belle et la Bete) is one of the greatest of all fantasy films. It captures the beautiful/frightening atmosphere of a fairy tale better than any other movie I’ve ever seen.

Isn’t there a version of this story in T. H. White’s The Once and Future King?

Major — Yes indeed there is. I had forgotten it (it’s been a very long time since I read White!) … in this version Death meets the man in Damascus one day and then finds him in Aleppo the next day.