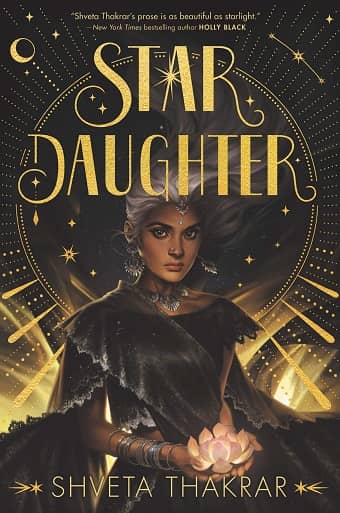 Shveta Thakrar’s short fiction has appeared in the anthologies A Thousand Beginnings and Endings, Toil & Trouble, The Underwater Ballroom Society, and Clockwork Phoenix 5, and magazines such as Uncanny, Enchanted Living, Faerie Magazine, Mothership Zeta, Mythic Delirium, and Fantastic Stories of the Imagination. Her debut novel Star Daughter mixes Hindu mythology and contemporary fantasy into something quite original.

It arrives from HarperTeen next week. Here’s the description.

The daughter of a star and a mortal, Sheetal is used to keeping secrets. Pretending to be “normal.” But when an accidental flare of her starfire puts her human father in the hospital, Sheetal needs a full star’s help to heal him. A star like her mother, who returned to the sky long ago.

Sheetal’s quest to save her father will take her to a celestial court of shining wonders and dark shadows, where she must take the stage as her family’s champion in a competition to decide the next ruling house of the heavens — and win, or risk never returning to Earth at all.

Star Daughter has been warmly reviewed by Publishers Weekly, Nerd Daily, and other sites. But I think my favorite critique comes from the Utopia State of Mind blog. Here’s an excerpt.

Star Daughter is a gorgeous fantasy debut about love, family, and humanity. You’ll be enchanted by the blending of Stardust elements meets Hindu mythology. Then the gorgeous writing will captivate you until you fall into the story of family and humanity…. Torn in two, Sheetal must grapple with her love for her father, her feelings of abandonment towards her mother, and her new family’s past in the celestial court. She so desperately wants to feel like she belongs… I loved the added element of this talent competition meets political upheavals and family secrets. Star Daughter asks what we will do for family, the desperation and agony and love and resentment.

Star Daughter will be published by HarperTeen on August 11, 2020. It is 448 pages, priced at $17.99 in hardcover and $9.99 in digital formats. The beautiful cover is by Charlie Bowater. Read an excerpt at Enchanted Living.

See all our recent coverage of the best in upcoming SF and Fantasy here.