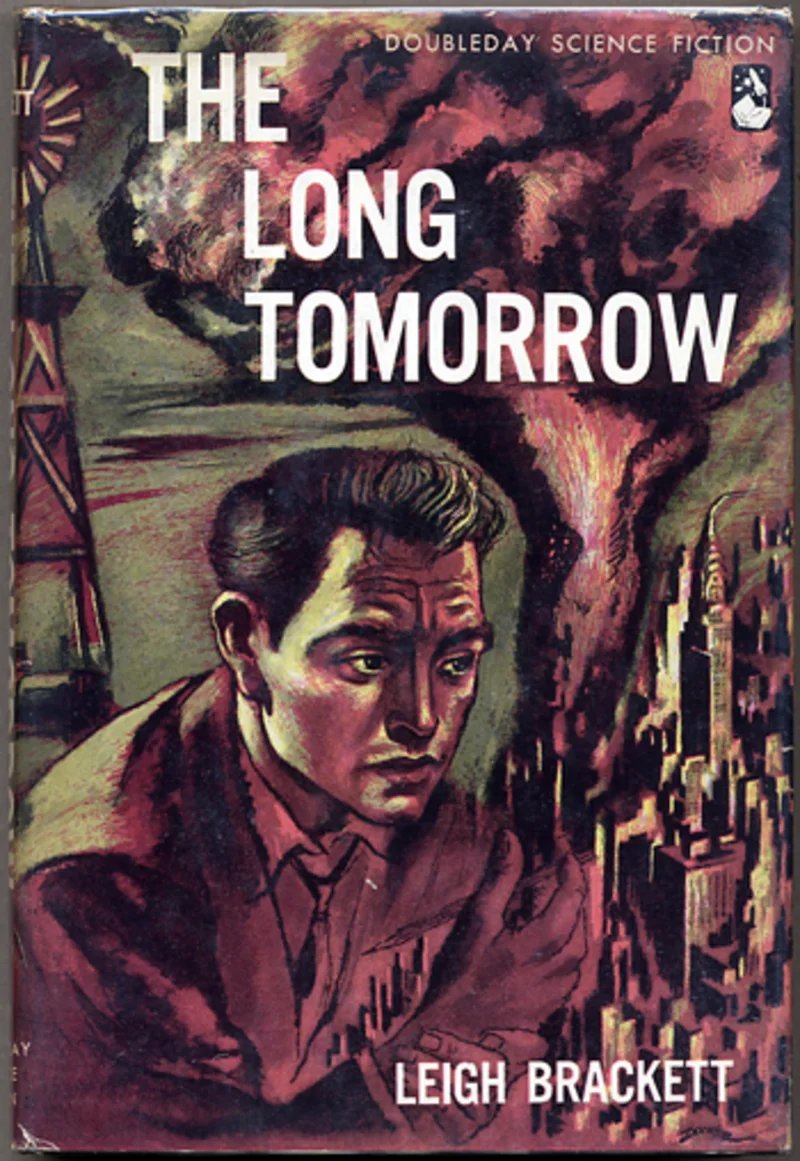 This novel, first of all, is one of a handful of highly regarded 1950s novels that deal with the aftermath of nuclear war, a theme very much of concern in that post-World War II era. Others include, of course, Walter M. Miller Jr.’s A Canticle for Leibowitz; John Wyndham’s Re-Birth aka The Chrysalids; Pat Frank’s Alas, Babylon, and Nevil Shute’s On the Beach, not to mention analogous novels about life after pandemic (George R. Stewart’s Earth Abides) or alien invasion (John Wyndham’s The Day of the Triffids and The Kraken Wakes/Out of the Deeps), and so on.

Second of all, this novel is by a writer otherwise not known for serious science fiction; Brackett wrote some detective novels and did some notable film work (see for details SFE), but she was known in the SF field for a large body of “planetary romances” in the Edgar Rice Burroughs mode, tales of sword-and-sorcery and romance on Mars or equivalent worlds. (Several volumes of these stories have been published by Haffner Press.) The Long Tomorrow, in contrast, is a sober post-apocalypse novel about rural survivors of nuclear war, a couple generations on, and how they deal with that legacy.

The novel was a Hugo finalist in 1956 (Heinlein’s Double Star won). If it were published today, it would be classified as YA, young adult, since the protagonist, as the story begins, is 14 years old; even though the themes of the book are about the most adult conceivable — the fate of the human race in the face of unavoidable technology.

Two generations after the Disaster (a nuclear war) destroyed the cities and most of technology, two boys in a small Ohio town hear of a place called Bartorstown, a secret government facility somewhere out west, and set off to find it. They experience a clash between progressives and reactionaries in a river trading town, then are taken under the wing of the trader Hostetter, who leads them to their goal: a nuclear-powered scientific lab inside a Rocky Mountain mine, where technicians search for a solution to the threat of atomic bombs. The boy Len rebels and attempts to return home, but is forced to face the reality that nuclear power, or bombs, like fire, once discovered, cannot be disappeared; they must be managed and controlled.

This is a sophisticated treatment of the notion that technology must be renounced lest it (again) destroy the world. The characters are complex and the situations never one-sided; we see the points of view of those who revere the past, those who fear its return, and those who struggle with the inescapable responsibility to deal with the consequences of technology that can’t be simply dismissed or forgotten. 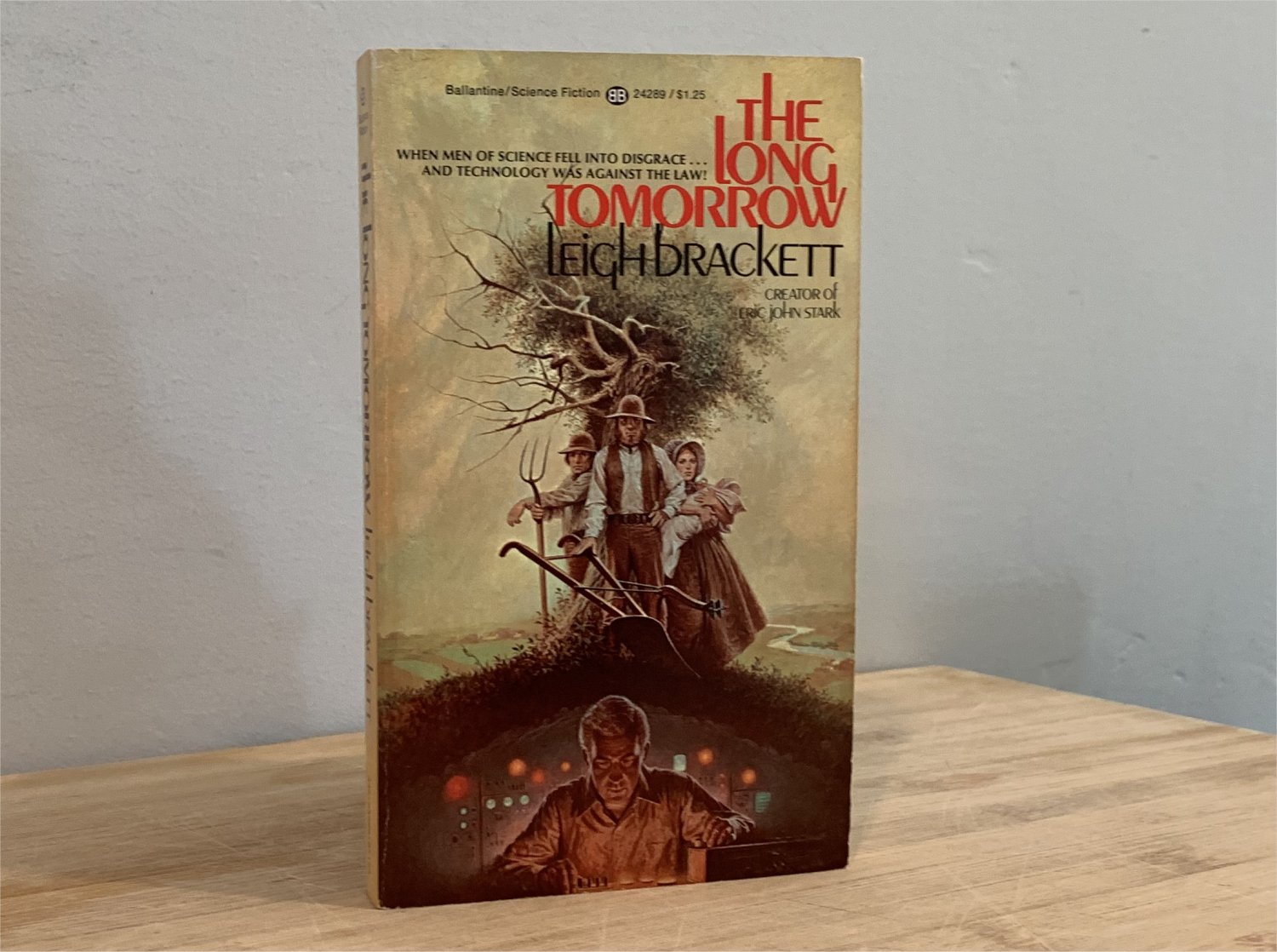 The novel is divided into three “Books.” Page references are to the 1974 Ballantine edition shown above.

In this Book cousins Len Colton and Esau Colton hear, at a Preaching event where a man is stoned to death, of Bartorstown; they hear radio signals from it; and they discover reasons for fleeing their small Ohio town in search of it.

Whether it was the stimulus of the radio, of simply that he was growing up, or both, he saw everything about him in a new way, as though he had managed to get a little distance off so that his sight wasn’t blurred by being so close. He was too busy and too tired. But now and then he would see Gran sitting by the fire, knitting with her old, old unsteady hands, and he would think how long she had been alive and all she had seen, and he would feel sorry for her because she was old and Baby Esther, a minute copy of Ma in her tiny cap and apron and full skirts, was young and just beginning.” (p45) 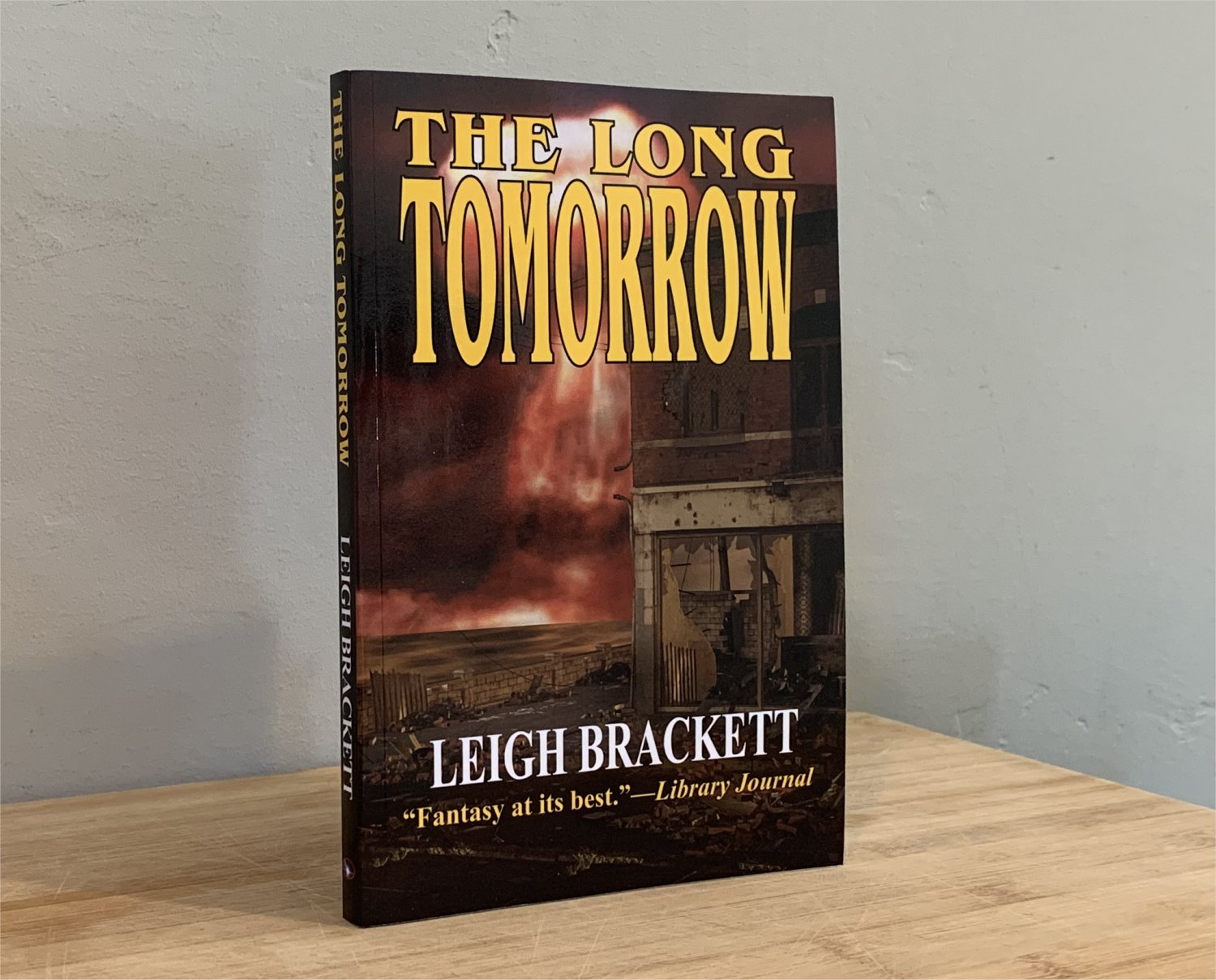 In this Book the boys live for a year in a river trading town, where a clash between an ambitious warehouseman and traditionalist judge leads to the destruction of the town and the boys’ rescue by the trader, Hostetter. Hostetter leads them west across the prairies to the Rocky Mountains, where Bartorstown lies hidden in plain sight.

No danger menaces us now. Why should we continue to live in the shadow of a fear for which there is no longer any cause? I’ll tell you why! It’s because the new Mennonites climbed into the saddle and have hung onto the government ever since. They don’t like growth, they don’t like change. 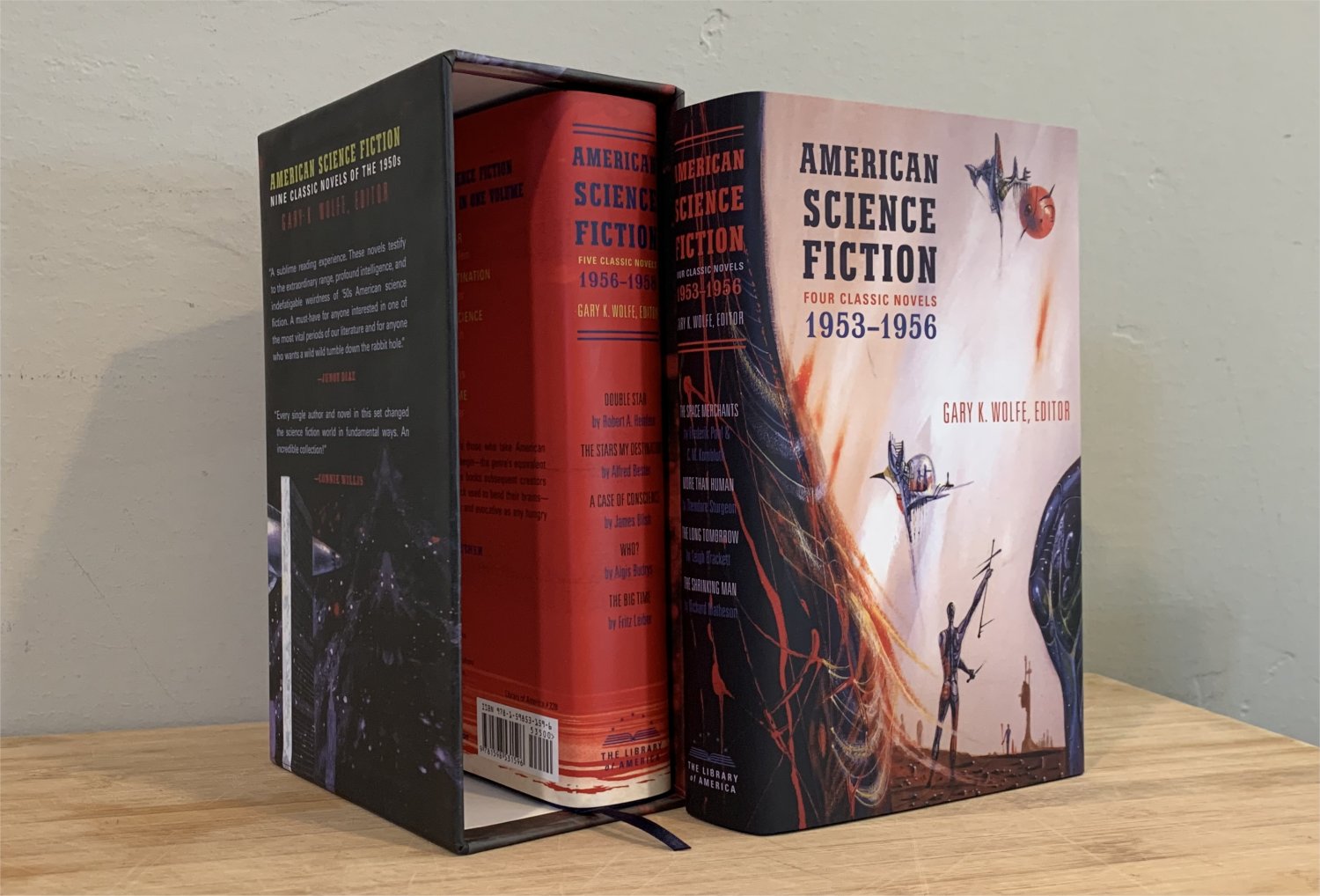 In this Book the boys settle in to the mining town Fall Creek, and then are shown Bartorstown: an underground nuclear-powered pre-Disaster government facility where a huge computer is still being used to try to find a shield against the threat of nuclear bombs. Sensing no solution will ever be found, Len and his bride flee, trying to return to Ohio, before Hostetter catches up with them and lets Len realizes he has a responsibility to work for a better future.

A voice screamed in Len’s ears, the voice of the preaching man, standing on the edge of his wagon with the sparks flying past him on the night wind — They have loosed the sacred fire which only I, the Lord Jehovah, should dare to touch — and God said  —Let them be cleansed of their sin—

I know now what lies across the land, the slow and heavy weight. They call it faith, but it is not faith. It is fear. The people have clapped a shelter over their heads, a necessity of ignorance, a passion of retreat, and they have called it God, and worshiped it. And it is as false as any Moloch. So false that men like Soames, men like Dulinsky , men like Esau and myself will overthrow it. And it will betray its worshipers, leaving them defenseless in the face of a tomorrow that will surely come. It may be a slow coming, and a long one, but come it will, and all their desperation will not stop it. Nothing will stop it.” (p259-260)

Mark R. Kelly’s last review for us was of John Wyndham’s The Kraken Wakes / Out of the Deeps. Mark wrote short fiction reviews for Locus Magazine from 1987 to 2001, and is the founder of the Locus Online website, for which he won a Hugo Award in 2002. He established the Science Fiction Awards Database at sfadb.com. He is a retired aerospace software engineer who lived for decades in Southern California before moving to the Bay Area in 2015. Find more of his thoughts at Views from Crestmont Drive, which has this index of Black Gate reviews posted so far.

It’s a very fine book indeed, though it didn’t strike me as being as “balanced” as it did you. Either way, Brackett deserves great credit for doing something so far out of her own swashbuckling Burroughs/Moore wheelhouse. She could have stuck to that stuff forever and no one would have thought the less of her.

Great book, and a great review. This series is really superb, Mark. You take such care in representing the books under review, and you have a lot of thoughtful stuff to say about them.

Anything by Brackett is on my read/always-reread list… but I confess that this isn’t in my hands as often as her detective fiction or her sword-and-planet stuff. It’s a serious book, a somber one, befitting its subject, and I think it limited LB’s creativity some.

It’s too bad she didn’t try her hand at more mainstream sf, though. It’s a disgrace to the genre that one of our greatest writers didn’t get a Hugo, or a Nebula, or even the coveted Balrog Award.