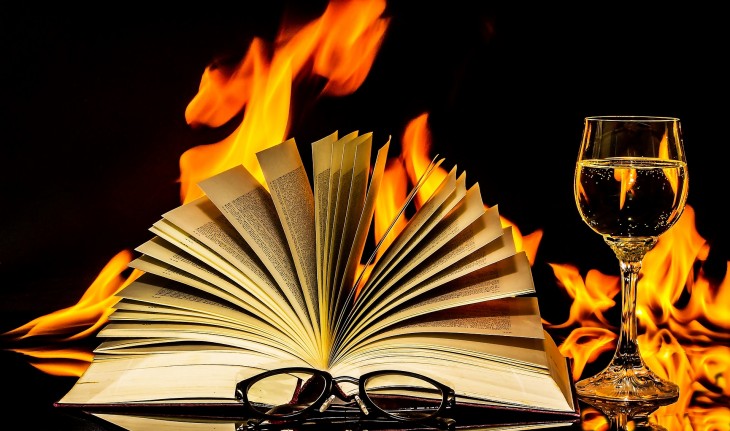 Image by Myriam Zilles from Pixabay

Remember a while ago when I asked for story prompts for a sort-of communal writing jam? Yeah, well, neither did I until recently. I had a month to work on this, and so naturally I completely forgot about until the week it was due. University essays all over again. Nevertheless, I figured I’d try my hand at it anyway.

This was the only prompt I received:

She impatiently checked her watch, sighing and rolling her eyes as burning debris rained onto the ground around her.

Many thanks again to Jaina for that prompt.

Short stories are not my strong suit, so it’s probably going to be stupidly rough and less than brilliant. I’ve not written a short story in a long, long time. So, if you’re reading it, feel free to have a good chuckle at my expense. I tried. Also, I’m terrible at titles.

If you can do better (and I don’t think that’d be difficult), link to your story in the comments!

With Her Last Breath 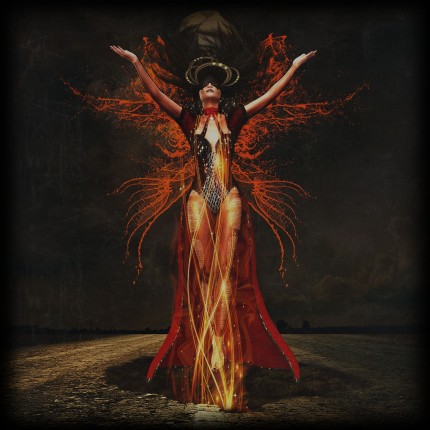 Image by Wolfgang Eckert from Pixabay

She impatiently checked her watch, sighing and rolling her eyes as burning debris rained onto the ground around her. Perhaps now they would pay attention.

Sirens filled the air. Now was the time.

Spreading her black coat, inside the sigil drawn of salt and ash on the lawn before the burning justice building, she began to dance. Each step was deliberate, meaningful. Each motion of her spread arms mimicked wings in their graceful arcs as she twirled and stepped. Her heart ached as she pulled forth the memories of her loved ones; sisters abused, raped, murdered. Some she knew intimately. Some she knew only by name. One was herself. In each instance, the grief for all they had suffered, at the loss, was replaced by rage and cold, hard hatred.

Firetrucks and police cars squealed to a halt before the burning wreckage. The police emerged from their cars, drawing their weapons, aiming them before fully comprehending what they saw – a young woman, dressed in a black belly dancing outfit and hooded clock, dark curls flowing freely beneath the hood. She danced before the burning wreckage of the justice building. Her eyes closed, she twirled and danced; careful steps in a circle of salt and ash, decorated with strange sigils.

“What the…” one officer whispered, narrowing his eyes. He placed his finger on the trigger of his gun. 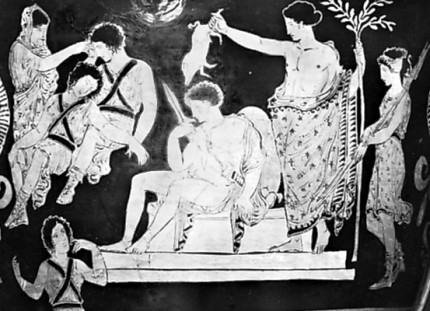 Clytemnestra tries to awaken the sleeping Erinyes (left corner).
Detail from an Apulian red-figure bell-krater, 380–370 BC.

Tamed, they claimed. They had tamed the spirits of vengeance. It was not by spear or shield they achieved this, for the spirits could not be bested in battle. It was the promise of justice that had mollified the sisters, that convinced them to set aside their scourges and calmed their maddening howls. And so the vengeful sisters vanished from the world, settling in their plane to rest.

But they had lied. There was no justice.

Abusers tormented their victims, aided by the silent compliance of their peers. Murders escaped justice with money and influence. Rapists walked free, the so-called justices more concerned for their futures than those of their victims. No. There was no justice. They had lied. They had created a false idol of justice to escape it.

Then they destroyed it. They were not even pretending any longer.

“Daughters of Nyx,” she cried, never losing her place in the careful dance. “I call to you. I call you by name. Alecto! Megaera! Tisiphone! Awake! Justice has died. Vengeance awake!” She spun, raising her hands and lifting her face.

The column of fire rose from the raging blaze behind the woman, shooting upwards in a terrifying twister of bright destruction. Everyone behind the barricade of police cars flinched back.

“How?!” someone yelled over the roar of the fiery maelstrom behind the dancing woman.

The woman stopped dancing. Her eyes, once closed and  cast upward to the sky, came down and opened to regard the scene before her. Everyone froze. The hood had not slipped down as she turned her face skyward. It obscured her eyes now as she peered out from beneath its edge. Still, a reflection of the fire flickered beneath that hood, dancing red in mad eyes. Her lips, the only visible part of her face twisted up into a mirthless smile. 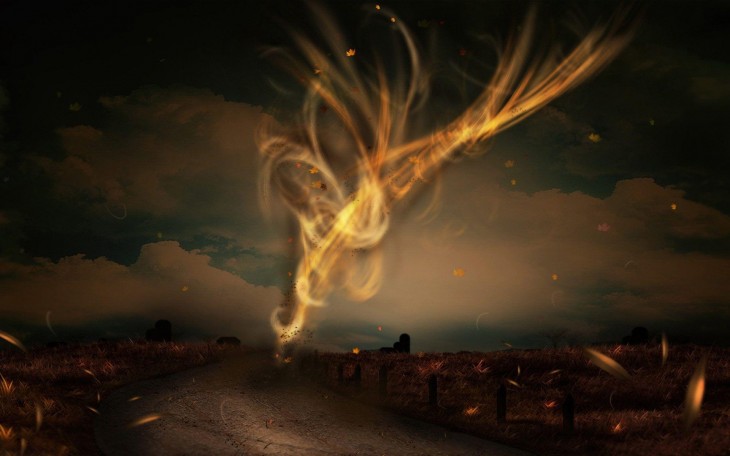 She spun, extending one hand out, fingers outstretched towards the barricade of police cars. A pillar of flame spun off the tornado behind her, flying out like a whip to envelop a car. The policemen hiding behind it screamed in agony as their uniforms caught. Firemen rushed to their aid as more tendrils of flame whipped out, throwing police vehicles, enveloping those hiding behind them.

“Open fire!” someone yelled. Without hesitation, the police complied.

She did not feel the first bullet when it pierced her side. She knew, distantly, that she had been struck, but her rage – made stronger by all the years of agony she had endured before this, only to watch her tormentor walk free – proved stronger than the pain. She spun and whipped her arms forward. Gathering the flame, and striking with it.

All the letters she had written to whoever was in a position to do something, explaining, had been ignored. Her pleas for justice, for her, for her sisters, were all ignored. She would not be ignored any longer. She had been forged by the years pain and impotent rage that were the result of questioning, months of cross-examination at trial, policemen laughing in her face, asking stupid things like, ‘What did you do to make him behave this way?’ and, ‘Are you sure what you think happened actually happened?’ and, ‘Were you drunk?’ As if any of these things mattered. As if she was in some way responsible for his actions as well as her own.

Keeping her victimized sisters in mind, holding tight to the stories, each maddening headline, of justice aborted, letting her outrage at all they had endured mingle with all the agony of her own torment, She gathered her strength. Screaming her ire now, she lashed out again, relishing in her blistering skin as the fire raced past her. They would feel her agony. They would know her pain. She would make them.

Three bullets found their mark. Three strikes into her chest. She did not feel these, either, but the absence of pain did not negate their effect and she collapsed. The roaring tempest behind her stilled and settled.

The officer moved forward quickly, his gun trained on the motionless figure on the ground in the centre of the circle. Her blood pooled beneath her, running in rivulets into grooves cut into the ground, creating a second sigil. The woman convulsed, her lips moving, whispering.

Kneeling, the officer bent over to listen.

It was impossible to breathe. But she did not need to any longer. The spell was cast. The final piece set. The last necessary element – a human sacrifice – made. She was going to Hell, but she did not care. When their howls of misery reach her there, she shall turn her face up and laugh. Her vision darkened, but her heart thrilled.

In the growing dark she heard the sound of drawn steel, the impatient rustle of leathern wings.