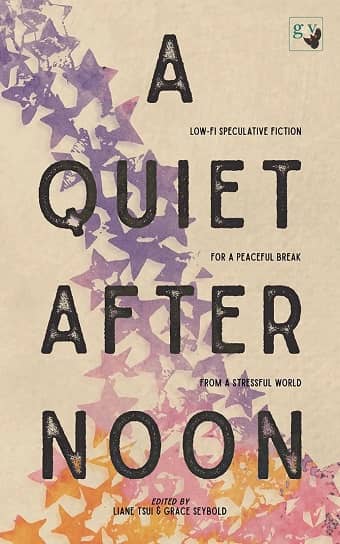 In their recently released anthology A Quiet Afternoon, Canadian micropress Grace&Victory offer calm and gentle SFF tales for the reader who would rather curl up with a mug of tea and an afghan (or a slushie and a hammock, depending on the weather) than dart about the cosmos with lasers blasting.

You’ve talked about low-stakes fiction, which you call “Low-Fi.” What does that mean to you?

LD: Stories that are comfortable to read, that don’t excite feelings stronger than warm fuzzies or faint melancholy. Which might not sound terribly flattering, I know. I imagine most authors want their stories to sear a flaming brand across the brains of the readers and leave them shaken and awed by the majesty of the prose, but really what I’m looking for is instant nostalgia. I want to think back on the story fondly, I want to revisit it in the way you enjoy pulling on an old sweater or a tatty pair of shoes.

VF: When I am stressed out, sometimes relaxing with a good book – if the book is full of action, violence, tension – only serves to stress me out more. In such times I often turn to different genres – literary, travel memoir, biography, and the like – for escape into gentler adventures. And yet, when I do, a part of me misses my spec elements. Low-Fi is about bringing the mundane and slice-of-life stories prevalent in other genres into the SF fold. SF has long been about larger-than-life heroes and do-or-die plots, but here and there are stories where the stakes are much lower. Ursula LeGuin’s Changing Planes comes to mind, as does Natasha Pulley’s The Watchmaker of Filigree Street.

So how is Low-Fi different from existing subgenres? Should it be considered its own sub-genre or merely a “tag”?

LD: I think it’s more about tone than anything else. A queen is near death in “An Inconvenient Quest,” there’s deadly traps and adventure in “Hollow,” “Of Buckwheat and Garlic Braids” has a potentially murderous strigoi, but because of the tone we never feel like anyone’s really in danger. I think as well there’s a definite refusal of violence as a solution and an emphasis on conversation as the way to problem-solve. Again, “Hollow” is an adventure story where the characters cast spells and shoot arrows, but in the end it’s a conversation that resolves the situation.

It’s not something we actively set out to enforce, but it seems fitting that Low-Fi also avoids salty language. And while we have a couple smooches, anything beyond that probably wouldn’t be appropriate for Low-Fi.

So I’d say sure, make it a new sub-genre!

GS: I can’t think of another subgenre within SFF that does exactly what we’re describing here, though there are of course a fair number of individual books and stories that do. There’s a bit in Suzette Haden Elgin’s Native Tongue where she describes “making a name for a chunk of the world… that has been around a long time but has never before impressed anyone as sufficiently important to deserve its own name.” Granted that genres and subgenres are to a large extent marketing categories, and granted their edges are so blurred as to be basically undetectable at any scale, I still think they matter. At least as a way to say “this thing is sufficiently numerous and important that we’d like to talk about it.”

I’d have liked to go with “cozy” for a name but alas, the mystery folks already claimed that one. I’ll admit I was initially dubious about “Low-Fi” just because it’s pronounced the same as “lo-fi” music, which is quite a different thing, but I’ve warmed to it now. And we’ve had a couple of people now comment that they primarily associate lo-fi music with chill YouTube study-session compilations, which do sort of evoke a similar feeling, for me at least.

What are some of your favourite comfort reads (either subgenres or specific books) that might fit the Low-Fi category? What have you been turning to lately?

LT: I visited my parents’ house a few weeks ago and retrieved a few more of my books (I moved two years ago and don’t have enough bookshelves yet). They were all old nostalgic favourites with very strong low-fi vibes: Kitchen by Banana Yoshimoto, A Tree Grows in Brooklyn by Betty Smith, the James Herriot books, and so on. They aren’t all sunshine and happy endings, but the writing and tone is such that even harrowing moments aren’t distressing. And they transport me to other places in a time when we are staying home as much as possible, but without sparking melancholy about it.

GS: As Victoria mentioned above, some of Ursula LeGuin’s work – Changing Planes certainly, and Always Coming Home. And Phyllis Ann Karr’s At Amberleaf Fair, which is an absolute masterpiece of immersive low-stakes worldbuilding.

I’m wondering now, and this is just off the top of my head as I answer this, whether certain media tie-in novels might fit into this category too, or at least be adjacent to it. After all, when you read a Stargate SG-1 book or a Star Trek book (at least the earlier ones before the fictional universe became quite as complicated as it is now), you know there are certain classes of things that just won’t happen. The Enterprise will be fine. The Goa’uld won’t take over the Earth. Nobody in the main cast will die. Etc.

So while there are still high stakes, often exceedingly high, there isn’t the same suspense there would be in an all-original book. Actually, the higher the stakes are in a tie-in novel, the lower the suspense, really. When it’s “this person or planet that has been introduced for this book is in danger!” well, that might come out any way; whereas if it’s “the Federation, or our heroes, or the entire universe is in danger!” we know pretty well that they will in fact be okay.

How about low-stakes/slice-of-life stories in other media (TV, movies, comics)? Do you think it’s more common or accepted there, and why?

LD: Coincidentally, Canadian Netflix is streaming Studio Ghibli movies right now! When Marnie Was There, From Up On Poppy Hill and Whisper of the Heart are my favourites.

Maybe it’s a kind of synaesthesia or just from re-reading each story so many times, but for each of the stories in the anthology, I have a very clear colour palette for each, one scene painted in broad watercolours in my mind’s eye, and these scenes speak strongly to me of that nostalgia tone. I feel like there’s more tonal shorthand readily available in visual media, so it might be easier and faster to convey the message of, “Hey, this is a slow-burn easy-going not-much-happening story and the little bar at the bottom is showing you exactly how much time you need to devote to this story.” But all of this is assuming I know how mainstream audiences think, which… yeah, I’m not an authority on the mainstream.

LT: I can’t think of many popular slice-of-life TV series or movies off the top of my head, but several graphic novels and manga come to mind. Perhaps low-fi is a genre/style that lends itself particularly well to the page. One of my favourite movies is American Splendor (2003), which has a low-fi feeling and is based on the comic book series of the same name. Ditto for My Neighbours the Yamadas (1999), an animated slice-of-life film based on a newspaper comic strip.

GS: The later Zot! comics by Scott McCloud maybe? Also one of my favourite movies of all time, After Life. Though I suppose that’s more a slice-of-death film, technically, since it’s about dead people helping other dead people adjust to their situation. But still.

What did you learn, making this anthology? What would you do differently?

VF: Being a group of authors means we’ve experienced being on the submitting side of the table many many times. Being on the accepting/rejecting side was an eye-opener. I had no idea how often people would ignore guidelines or focus on one element of our ask and ignore the others. We spelled out what low-stakes meant for us; a lot of submitters took that to mean ‘stories with no plot.’ Or murders. For some reason we received a lot of ‘murders but in space’ stories. Next time I will be much specific in saying what is a hard sell.

LT: This was my first time editing fiction. I work as a production editor on educational materials, so I’m usually looking for mechanical errors or stray punctuation or funny math. Grammar and word choice have so much nuance in fiction; I had to learn when to push back and when to defer to the author’s intention. In most cases, the authors had compelling explanations behind whatever I queried, and we kept the original idea. The authors were all wonderful to work with, and I am as grateful to them for sharing their passion and voice as they were for any editorial fine-tuning we did.

Given the state of the world, what is your prediction for future trends in SF publishing? Do you see Low-Fi being among them?

VF: I do think that SF publishing is diverging. High-stakes stories are where the money is for the Big 5, but as micro-presses become easier and easier to start and maintain in a world of online publishing, I think we might see a splintering of niches similiar to what happened in the 70s and 80s as SF moved from pulp. It’s a big wide interconnected world and a lot of people are looking for fiction that speaks to them personally, not just to the widest group a publisher can net.

LD: Like I said earlier, I’m looking for instant nostalgia when I’m reading Low-Fi, and nostalgia never goes out of style. And given that the nostalgia I want is of instant childlike friendships and the bittersweet joy of moving on and not of, say, whitewashed history and the wilful ignorance of how lousy the “good ol’ days” really were, I’d say Low-Fi is something that people want and need. A longing for the future to be as good as the past we want to remember.

A Quiet Afternoon is available for $5.50 US ($7.50 Canadian) at graceandvictory.ca. Grace&Victory Publications is on Facebook and some of its members are on Twitter at @vfeistner (Victoria), @graceseybold (Grace), and @writinrooster (Laura).

I am somewhat surprised that I don’t see the name of Charles de Lint here, considering the Canadian angle. Goodness knows he has done multiple short stories that fall in this category…his Balloon Men tumbling along a deserted beach come immediately to mind.