The Aliens Among Us by James White. Ballantine Books, 1969. Cover by Paul Lehr

White was an Irish SF writer who’s not very well remembered today, but he was a big deal in SF circles in the 80 and 90s. He began writing professionally in 1953, and published some 20 novels and five collections in a career than spanned nearly five decades. His last novel Double Contact appeared in 1999, the year he died.

White’s most popular creation was Sector General, a deep space medical installation that treats all the races of the galaxy. It was the setting for a long-running series — a dozen novels and collections — published between 1957-1999. Most of the stories were fairly light fare, low-stakes galactic hospital drama, but their enduring popularity earned White a solid rep. A total of four omnibus collections were published, one by the Science Fiction Book Club (Tales of Sector General, 1999), and three by Orb, Beginning Operations (2001), Alien Emergencies (2002), and General Practice (2003). Believe it or not, all three of the Orb volumes are still in print, nearly two long decades later. That’s an impressive legacy.

If White can keep omnibus editions in print for 20 years, why do I say he’s not well remembered? Because while Sector General remains popular among older fans, White’s star has otherwise dimmed significantly. How little demand is there for his work? Five years ago when I won a nearly complete set of James White — 24 vintage paperbacks — on eBay, I was the only bidder. The price? $5.

I still think White speaks to modern audiences, and that’s why I’m still talking about him. Today I want to point you towards his second collection, The Aliens Among Us, published by Ballantine in 1969. 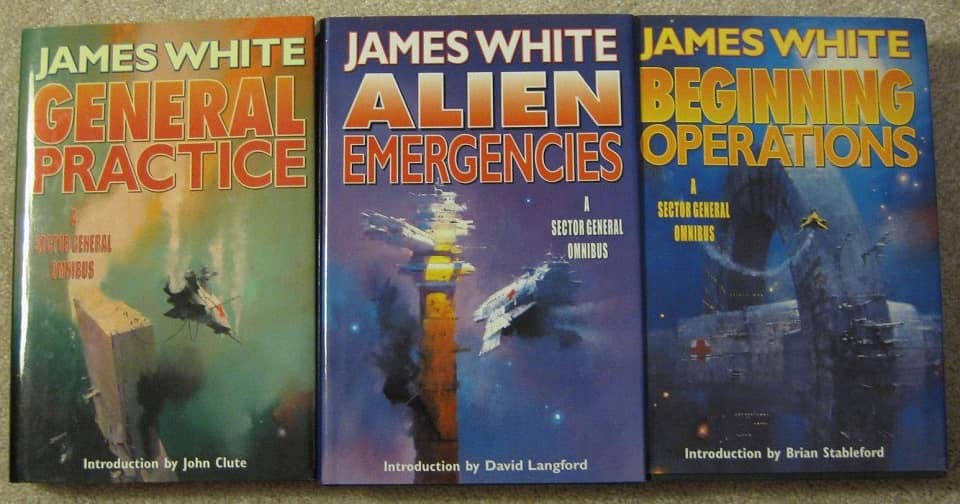 The Orb Omnibus editions of the Sector General novels and stories

The Aliens Among Us features a nice cross section of White’s work during his most productive period, containing seven generally longer stories written between 1953-1960. They include three Sector General tales, including the long novella “Occupation: Warrior,” originally published in Science Fiction Adventures in 1959.

White’s short stories appeared chiefly in New Worlds Science Fiction, though he sometimes popped up in Astounding and Analog. Here’s a look at the magazines these stories originally appeared in.

I think this collection is a fine place to start to get to know James White better. I bought my copy as part of a collection of vintage paperbacks I purchased last month. 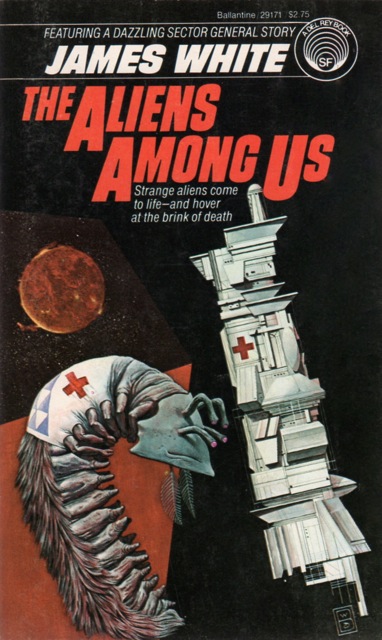 Nice to hear of your windfall John. I had not heard of white until I started encountering the odd book in the book exchanges I frequent. Nice cover art, on both the Ballantine and Del Rey. Enjoy the deep dive into his books.

I enjoyed “All Judgement Fled”. A BDO novel. I agree with you and would add fellow Northern Irishman Bob Shaw as another forgotten author.

CJN1 – bizarre! I almost mentioned Shaw, unknowing their shared heritage, simply because when I purchased my (Orbit) copy of All Judgement Fled I happened to pick up Bib Shaw’s The Ragged Astronauts, the one with the awesome Ian Miller cover.

Tony Den- that’s a terrific cover, never seen it before! (Isfdb) Although I haven’t read that one yet. One of Shaw’s I have read is Night Walk. It has a great cover too by Vicente Segrelles. It was a weird idea wrapped in a conventional plot. Worth reading. I need to dig out more of these two

CJN1 – Would love to hear more on them, while I own (have not yet read) a book or two would be great to learn more about the authors.

Segrelles – The Mercenary artist and author. Cant go wrong there, one of my favorite artists.

> when I purchased my (Orbit) copy of All Judgement Fled I happened to pick up Bib Shaw’s The Ragged Astronauts, the one with the awesome Ian Miller cover

Like CJN1, I had to go look up the Ian Miller cover (below left). I’d never seen it before either! American readers are much more familiar with the Baen cover (right) by Carol Russo (click to see the original art). The Ragged Astronauts won the 1986 BSFA Award, and came in second for the Clarke, and lost out to Speaker for the Dead for the Hugo.

> I enjoyed “All Judgement Fled”. A BDO novel.

OK, I have to ask… what is BDO? I wasn’t aware All Judgement Fled was part of a series?

Another thing I wasn’t aware of… All Judgement Fled was published with a cover by the great Bruce Pennington, for its original paperback release from Corgi in 1969 (below left).

> One of Shaw’s I have read is Night Walk. It has a great cover too by Vicente Segrelles.

Very true! Night Walk has had a whole host of great cover artists over the years, starting with none other than Frank Frazetta for its original 1967 paperback release from Banner (below left), followed by my favorite cover, the 1977 Corgi release (Vicente Segrelles, middle), and finally the 1979 Dell edition (right, Rowena Morrill). It’s also had covers by Paul Lehr, Don Punchatz, and Peter Gudynas… quite a gallery of talent!

> Segrelles – The Mercenary artist and author. Cant go wrong there, one of my favorite artists.

Holy cats — I totally forgot Segrelles was the artist behind The Mercenary! That was one of the most popular features in Heavy Metal magazine back in the day. I bought several of the collections 20 years ago. Gorgeous stuff indeed (although targeted at a teen male audience, like a lot of Heavy Metal stuff.)

James White’s SECTOR GENERAL series is very unrated. You could consider them a precursor to HOUSE where the doctors have to solve medical mysteries…except with intergalactic aliens.

Thanks Kelly! Do they feature the same set of characters? Or does each book deal with a different cast?

Sorry! BDO stands for Big Dumb Object. Clarke, Bear, Niven style novels. Although White does in 200 pages what the rest need 1000. I can’t remember which sf website used it first. I read the “All judgement fled” ‘87Futura one. It has an excellent cover by John Harris. This article makes me want to get the rest of his stand alone novels.

Perhaps Black Gate should host a glossary in links of Sci-Fi/Fantasy/Genre/RPG abbreviations and . BDO, BFF, Third Tiered RGP etc, so many times i either just figuratively shrug and ignore, or go out searching, often in vain, as to what the meaning is.

I read everything James White I could get my hands on back in the day. Years later, my favorite is probably Lifeboat.

I love White’s books and stories, and have read as much as I’ve been able to find. I’m lucky enough to have the original oil painting that’s on the cover of ALIEN EMERGENCIES.

Ah! I should have figured that out. 🙂

> This article makes me want to get the rest of his stand alone novels.

Well, they’re pretty cheap. There are about a dozen lots of White paperbacks currently on eBay, most selling for $2-3 per book or less. It’s a buyers market for James White fans at the moment.

James White certainly was doing things in SF that no one else was. He was essentially a sub-genre all to himself.

Was ANYONE else writing deep space medical adventures? Maybe Murray Leinster, with his Med-Ship tales, but that’s the only example I can think of. 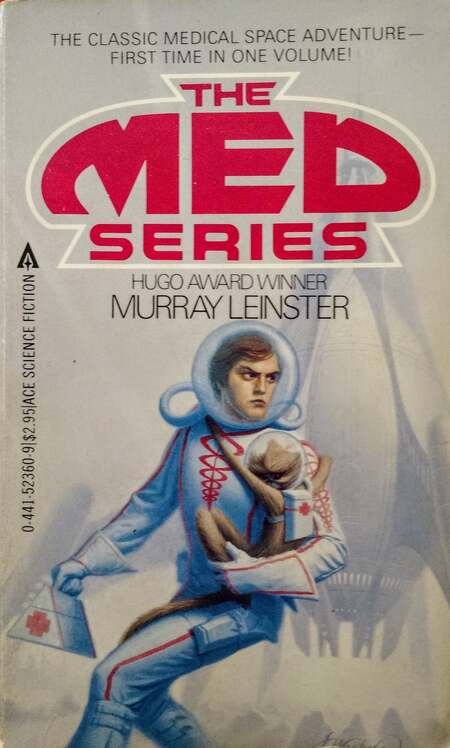 > Perhaps Black Gate should host a glossary in links of Sci-Fi/Fantasy/Genre/RPG abbreviations….

LOL! Too much responsibility for me. I’ll stick to talking about old paperbacks. 🙂

> I read everything James White I could get my hands on back in the day. Years later, my favorite is probably Lifeboat.

Great pick! Lifeboat has one of my favorite Ballantine covers, and I’ve always been curious about it. It’s near the top of my James White TBR pile. Check out the cover art by John Berkey on the 1972 paperback original (click to see a high-res scan of the original art). 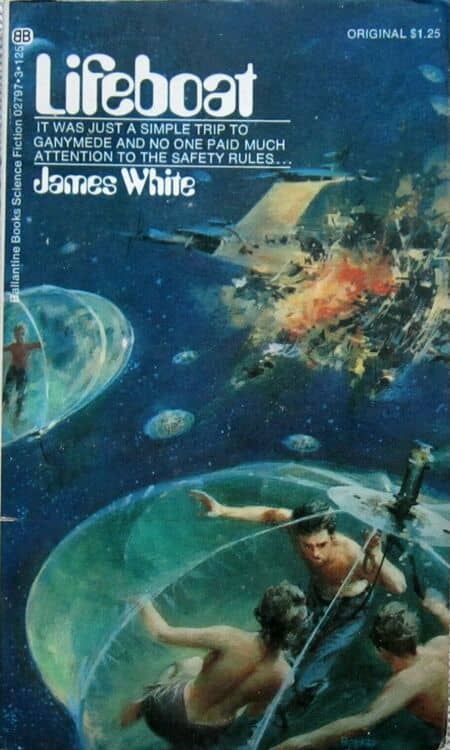 > Was ANYONE else writing deep space medical adventures?

Alan Nourse was a physician and sf writer who did combine his two vocations. He wrote Star Surgeon, which is not to be confused with James White’s novel with the same title. Which seems to be a predilection with Dr. Nourse, as he also wrote Trouble on Titan (not to be confused with Sam Delany’s Trouble on Triton) and The Bladerunner, which is about future underground medical services and which was the inspiration for the name of the Ridley Scott film, though not for any of the film’s content.