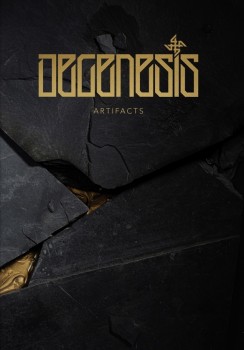 But that’s SMV for you, a company “founded by artists and run by artists.”

As I said in my initial review of the game, you can look at Degenesis as an expensive art book which comes with a free game, or an expensive game book with the most lavish art design in the history of the format. So you can convince yourself that even at USD 60 you’re getting a great deal, FedEx shipping from Berlin included, using many of the same mental gymnastics car enthusiasts might when signing for a new BMW.

Degenesis is already a complete game. But one of the 4chan descriptions of it is “90% fluff and 10% crunch.” While I don’t think that’s near accurate – I’d put it at 70/30 — Artifacts adds plenty of crunch. It gives additional rules to build, motivate, and describe your avatar and player group. There are enhancements to your campaign and a good deal of new technology for the players to use and fight over and a bunch of imaginative new rules for clawing advantage out of the much-altered Earth. And of course there’s first-rate art.

Here’s a quick overview of the game enhancements. Artifacts is divided into twelve parts, and I’ll spend the rest of this review providing thumbnails of the contents. 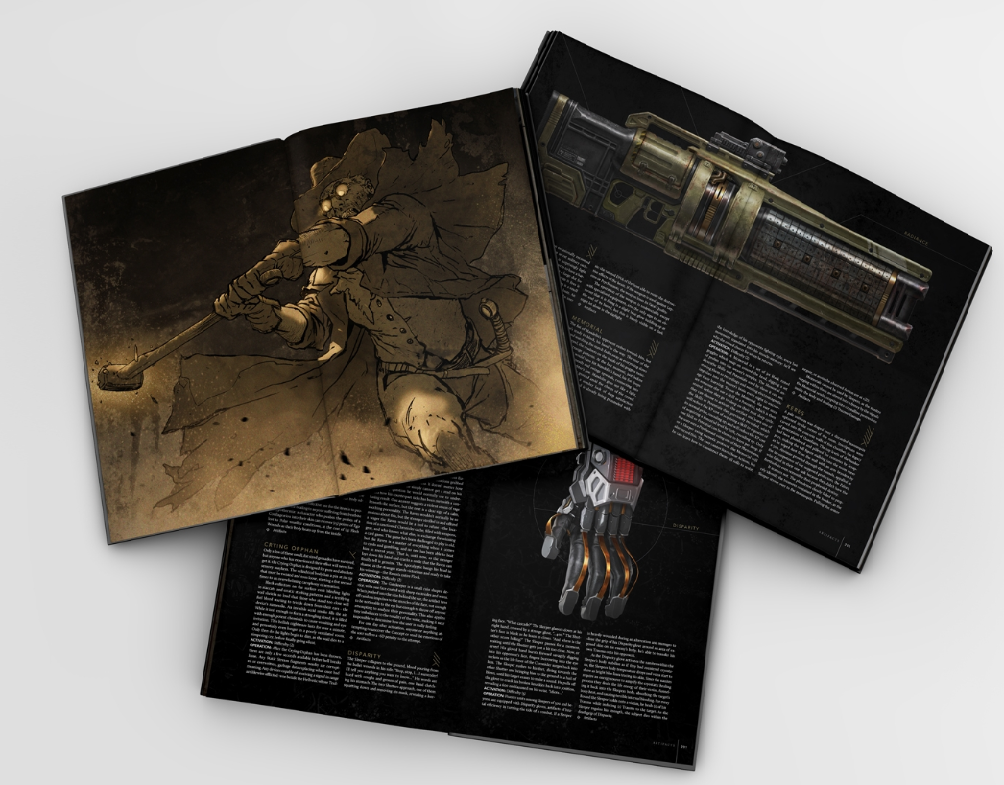 LEGACY – this is the new chargen feature. You might say it’s an attempt to incorporate your character’s previous experiences, what they might be known for. You can choose up to three, but there are prerequisites for many of them featuring some mix of the attributes, skills, concept you’ve already built. They have suitably intriguing one-word descriptions that often sound like a 1980s TV series: Outcast, Vigilante, Firebrand and so on. Every legacy comes with both a benefit and a drawback the GM can use against you as you progress through the game.

SCARS – I found this chapter really intriguing as it turns the gaming group into its own form of collective character. Your gaming group will have an alignment, which is more of a description of what the group is trying to do no matter what particular adventure they’re on in the campaign, and when they act in accordance with their alignment they get benefits. Alignment may change over the course of many sessions, say your group started out motivated by revenge, once the revenge is accomplished it may reform with a new alignment. Degenesis is about group wins and I think the Scars mechanics takes that to the next level.

A group of characters with similar concepts (the chargen mechanic that describes the person’s outlook on life) can become a “Constellation” and have valuable bonuses when trying to achieve their group goal. One of the things I admire about Degenesis is its attempt to capture synergies, whether it’s the individual character’s mind (be it at the direction of natural willpower or religious ecstasy) pushing the body beyond what might seem possible or group dynamics that might cause an army to throw away its weapons and run from battle. This mechanic is designed to give a natural and understandable advantage to a group that is aligned more like a SEAL team rather than a random group of people resembling the survivors on the overturned SS POSEIDON. Both groups can make for great storytelling, but one is going to have advantages getting things done as a team from the get-go.

SURVIVAL – Additional rules and gear for getting around the world of Degenesis, including weather effects.

HEALTH — This section is a mix of rules for infection, folk medicine, emergency medical procedures like transfusions and amputations along with a fluff section about what medical care is like in each of the regions. Degenesis is a game with a lot of adult content, so we have new rules for various kinds of drugs that might be used to enhance performance and an intriguing section on “Burn” which is the game’s “Primer” dust that altered a good chunk of mankind and much of the ecosystem refined into a usable substance. Every game needs magic potions, right?

COMBAT – More rules for unusual situations in combat. It starts off with cover effects and how a brick wall might be degraded by gunfire hitting it and I started thinking about that scene in Clint Eastwood’s The Gauntlet where the police shot at a house until it collapsed. I skimmed the rest while chuckling but it’s all useful stuff: aimed shots, sneak attacks, disarming, team takedowns . . . nothing in this section changes my opinion that Degenesis is an extraordinarily deadly game once the bullets start flying and players need to go in with a plan that allows them to overwhelm the enemy in as unfair a fight as possible.

ENERGY – This section covers the many ways to supply power to people, places, and things. I can see it coming up now and then in a game if the characters have to power something up. This was probably the one section that seemed like a bit of wasted effort, but for world-building engineering-minded groups now there are rules for getting something up and running.

ECONOMY – One of the “cults” in the world of Degenesis is the Neolibyans, North African traders currently exploiting what’s left of Europe. The Neolibyans are busy looting art treasures, natural resources, old technology, anything that might be sold and a nice profit in the thriving markets of Africa to the newly-rich civilizations there. This section provides a lot of rules and ideas for a Neolibyan to open and run a “concession” in an area of Europe. While this might seem to have the same flaw as the Energy section above, I really liked this part as it could be used for anything from providing the backbone to a campaign (a Neolibyan goes into a one-horse town to try to turn it into a thriving commercial center of civilization among the Europeans – does the character run it along humanitarian lines of Truth, Justice, and the Neolibyan Way or go all King Leopold’s Ghost on the natives?) to adding interesting backstory to a Neolibyan NPC the players use as a resource for information, financing, bullets, and/or technology. I always enjoy NPCs who themselves are beset by problems and difficulties even as the players are wheedling for some sort of favor.

That’s one of the fun things about the world of Degenesis, you could create an all-African adventuring party going into the wilds of Europe fending off the local savages while searching out a rumored lost treasure of immense value, or maybe a more noble-minded party looking to bring civilization to the half-feral, grunting Euros as the Great Black Savior in the noble cause of uplifting the backward natives. 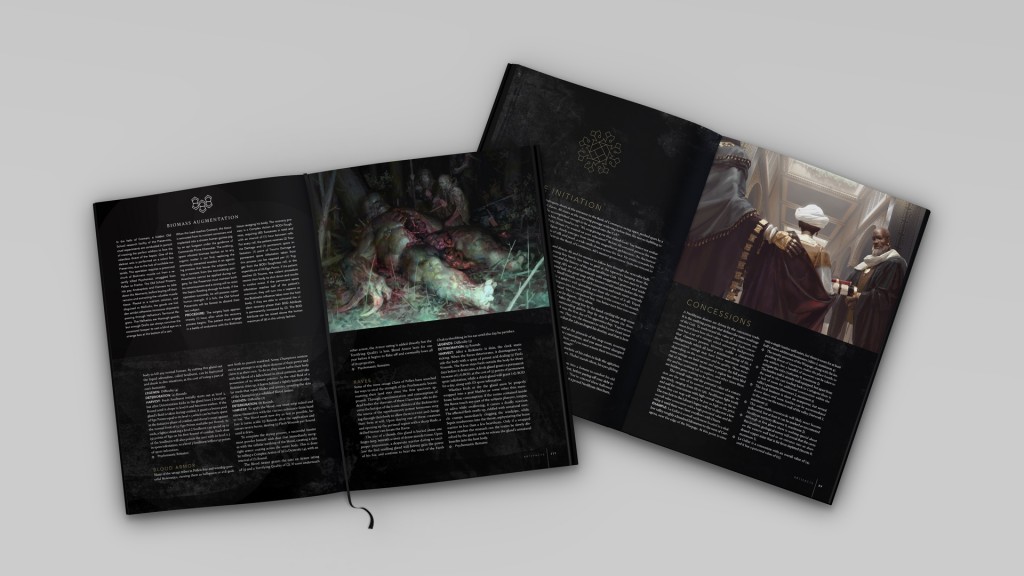 PRIMAL INGENUITY – Wow, this section was something. In Degenesis some of mankind has been altered by the Primer, a sort of spore that came in on the meteors that struck earth. The primer-altered humans and animals are some of the most serious dangers when exploring the altered Europe and Africa of Degenesis. This section is a new set of rules for harvesting useable substances from these unfortunates after you’ve killed them. Yucky, but cool, and that goes double for the art in this section. Also, it confirms my belief that having at least one character with a strong medical or scientific skill set really helps your party survive this world.

POTENTIALS – Potentials are what makes your player character unique. It’s a special set of one or more cinematic skills that really distinguish them from others. The only problem with the base game is there aren’t enough, each cult (the character classes of Degenesis) only has a handful. Well, this was an answer to a need in the game, because there are now dozens of new ones, fifteen for each of the cults plus another thirty that are “common” that anyone can take, provided they have the necessary character prerequisites. This is the section I’m most excited about; the game is much improved by these new potentials.

ARTIFACTS – At last we reach the section that gave the expansion its title. Artifacts are remains of godlike, pre-apocalypse technology. After some quick rules about how they are awakened or restored to full function, there’s several pages of legendary items, most of Baba Yaga’s Hut/Wand of Orcus-level power and worthy of an adventure or three to find and use them.

MEMETICS – Just explaining what memetics are and who uses them would require paragraphs of world lore. The thumbnail is they’re psychological powers used by a few player characters and high-level enemies to influence the actions of others through deep programming. Arthur C. Clarke’s technology-indistinguishable-from-magic, in other words. How often the players will have to deal with memetics depends on what kind of campaign is going on, this is more of discovering the deepest secrets of Degenesis level stuff rather than fighting the guerilla war in Hybrispania.

Artifacts wraps up with all the newly introduced gear and so on put together in table form and an index.

This is an exciting expansion for a game that I think gets under your skin. You don’t have to sell a kidney to try it: SixMoreVodka has put the rules out there in a free trial version. I look forward to seeing what Justinian, their fall release, adds to this fascinating world.

E.E. Knight is a science fiction and fantasy author who currently hiding from COVID-19 in Oak Park, IL. His next novel, DAUGHTER OF THE SERPENTINE, the second volume in the DRAGONEER ACADEMY series, will be published in November 2020.

Can’t wait to get my hands on my copy. Excellent write up!