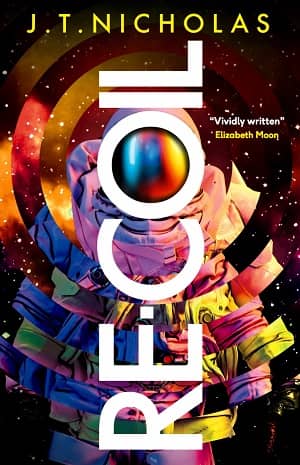 When I published my first novel The Robots of Gotham (written under the name Todd McAulty), John Scalzi was enormously kind to me, helping me promote it by featuring me on his blog Whatever, one of the most popular SF sites in the country. I used the opportunity to conduct a mock interview with an ill-fated Sovereign Intelligence machine character, and it was a lot of fun.

Scalzi’s blog is a great way to discover new writers, in fact, and I’ve become a regular reader. It’s how I discovered J.T. Nicholas’ new novel Re-Coil, out this month from Titan. Here’s a snippet from his own guest post at Scalzi’s Whatever, published earlier this month:

The story – the plot – is a whodunnit at its heart, a mystery where the protagonists are trying to hunt down their would-be killers and stop the first truly existential threat to humanity since mankind uncovered the secrets of immortality. It’s part mystery, part space action romp, and part cyberpunk conspiracy tale. But writing those bits was the easy part. For me, the hard part of Re-Coil was creating the world, fleshing out the societies, and answering the questions my agent and editor posed. Big questions on race and sex and gender and identity and power that I hadn’t really intended to write about, but once I set up the basic premise, I couldn’t possibly avoid.

You can read Nicholas’ full article here. Here’s the publisher’s description for Re-Coil.

Carter Langston is murdered whilst salvaging a derelict vessel — a major inconvenience as he’s downloaded into a brand-new body on the space station where he backed up, several weeks’ journey away. But events quickly slip out of control when an assassin breaks into the medbay and tries to finish the job.

Death no longer holds sway over a humanity that has spread across the solar system: consciousness can be placed in a new body, or coil, straight after death, giving people the potential for immortality. Yet Carter’s backups — supposedly secure — have been damaged, his crew are missing, and everything points back to the derelict that should have been a simple salvage mission.

With enemies in hot pursuit, Carter tracks down his last crewmate — re-coiled after death into a body she cannot stand — to delve deeper into a mystery that threatens humanity and identity as they have come to know it.

Re-Coil was published by Titan Books on March 3, 2020. It is 359 pages, priced at $14.95 in trade paperback and $7.99 in digital format. The cover was designed by Vince Haig. Read an excerpt at Tor.com, and see all our recent New Treasures here.