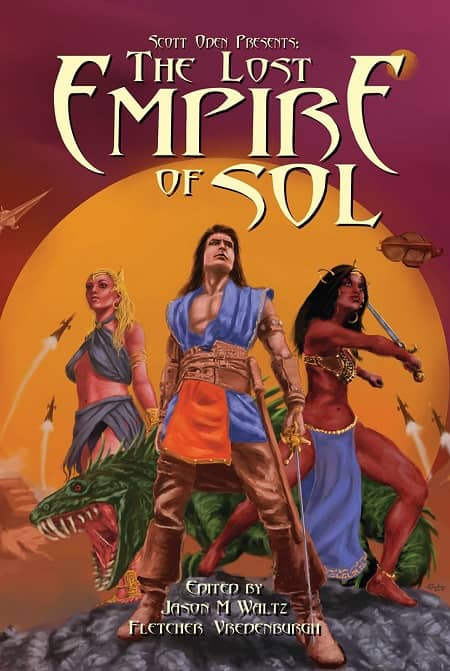 Edited by Jason M Waltz and Fletcher Vredenburgh, this collection brings together ten stories of adventure and excitement from across a gloomy and ancient solar system far older than the one known to us. From the back cover of the book, “The legends speak of a united Empire that spanned the entire system.” Then, “All that is certain is that when the Daemons came, they brought a level of destruction not experienced in countless millennia.” And, “In the end, the Empire was fractured in the wake of the Daemons’ passing. Some worlds maintained tenuous contact; others were blasted into a state that left them bereft of their own history …”

That should stir the soul of any fan of the Sword & Planet genre.

The cover of The Lost Empire of Sol is brought to colorful life by artist M.D. Jackson with aliens, action, and intrigue. Inside the book will be more from Jackson, artwork of of the solar map that displays the expanse and might of the former empire.

For those not familiar with Rogue Blades Foundation, this non-profit publisher also recently announced the upcoming publication of its first book, Robert E. Howard Changed My Life, featuring more than 30 essays concerning the impact author Howard has made upon many, many lives.

For further news and information regarding Rogue Blades Foundation, please check out the RBF web site or the RBF Facebook page.

Ordered! With a line-up like that, how could I not?! Huge fan of the editors and authors.

Thank you, Ty! Thank you, Seth! I am very proud and honored to have a story included in this one, co-written by David C. Smith. This project has been a long time coming, and it was well worth the wait. What a magnificent cover, too! Thanks also to Jason Waltz, Scott Oden and Fletcher Vredenburgh.